After the events of part one I set off towards the Scottish National Portrait Gallery to take a look at the Taylor Wessing Photographic Portrait Prize.

The Taylor Wessing Photographic Portrait Prize is the leading competition to celebrate and promote the very best in contemporary portrait photography from around the world.

The selected images, explore both traditional and contemporary approaches to the photographic portrait whilst capturing a range of characters, moods and locations. Alongside informal images of friends and family, this year’s exhibition also features revealing portraits of famous faces, including actor Benedict Cumberbatch and the President of the United States Barack Obama with First Lady Michelle Obama.

All of the entries were amazing; I’m always so in awe of how talented people can be. There were a few that really stood out to me though:

This image from the series Beautiful Strangers by Peter Zelewski is so striking, I think the shallow depth of field really makes this image stand out; when I was in the gallery it felt like she could look right through me. This collection of work is about challenging what traditional beauty is, by using spontaneous subjects on the street that show a uniqueness and special inner character.

There is something so moving about this image, it is from the series Unspoken Conversations: Mothers and Daughters by Rania Matar. This work looks at the relationship between female maker to female subject and of womanhood on each side of the camera – a spoken and unspoken conversation. I can’t remember if this is exactly right and I do wish I had written it down but I believe that the mother was an artist but was now no longer able to see well enough to create any art and has to be looked after. I thought it was such a beautiful image alone but when I read the story about the two women it really put the image into perspective, I could connect to it. 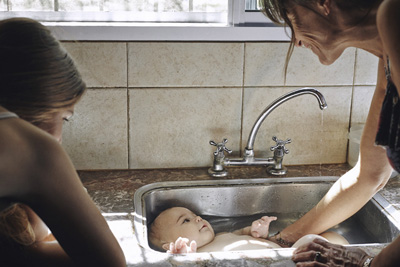 The last one is from the series Finca la Prospera by Sophie Ebrard. The artist had met the family depicted ten years earlier on a backpacking trip and had then gone back to visit them in 2014. They are the memories of them meeting again, life has passed by, there have been new additions to the family but the friendship remains. What I really liked about this image was that it is something that can connect most families, I remember my sister being washed in such a way and I’ve seen pictures of my grandparents doing the same with me, it is such a relatable thing for many people.

I would really recommend going to have a look if you are passing or have some time to visit.

For my next two stops it was back to the book festival, first up was Marina Warner with Fantastically Feminist Fairy Tales. This was such an interesting talk looking at the role of fairytales, how they can be retold to suit today’s changing standards and to make remarks on issues that you may not always have the freedom to say without the parable. Here is a little snippet of it:

She also read one of the short stories from her new book Fly Away Home, called Breadcrumbs, about a nurse recounting the story of finding her family again after being separated through tragedy. It’s gone on my to be read list!

My final event of the day was a talk by Jan Carlson and Lara Williams, Smart and Very Human Short Stories, talking about their short story collections Children’s Children, stories with a particular focus on the divides in Northern Ireland and Treats, which explores love, sex and alienation in the 21st Century. 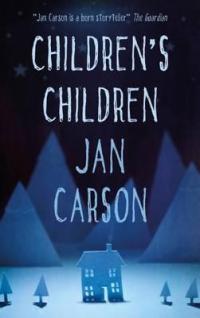 I found it really interesting because I’ve not read an awful lot of short fiction but they were saying how different it is to write short fiction because every word counts and that you have to find the right rhythm when writing. They both read out a story from their collection and both were brilliant, Jan read a story (that I cant remember the title of) about a boy who gets fostered out to rich families and then steals things from them and Lara read one that I think was called Penguin, that was about finding a new relationship and dealing with peoples quirks in a very dead pan and humorous way.

Overall I had an amazing time, there’s still a few more days of the Edinburgh International Book Festival, even if its just to go and relax and read in the garden. The Taylor Wessing Photographic Portait Prize will be exhibited in the Portrait Gallery until the 2nd October.

I think I’m going to sit down to a good book now.

10 Blind Dates by Ashley Elston
I love it when I get a package and I just know that it’s a book, especially when I open it and the book is this pretty 💜
The Idea of You by Robinne Lee
Cinderella is Dead by Kalynn Baron
Book Lovers by Emily Henry
Our Crooked Hearts by Melissa Albert
One Last Secret by Adele Parks
The Setup by Lizzy Dent
Last year I saw a few people sharing their reading stats and it got me thinking that whilst I keep track of the books I read for my Goodreads challenge, I haven’t kept track of anything more in-depth about the books I read.
Loading Comments...
%d bloggers like this: