So a little while ago I joined a Goodreads Group created by Zuky who blogs at BookBum called The BookBum Club, what’s great about it is that it isn’t a set book. Zuky gives a theme for the month and you can pick a book to fit with it, this months theme is NEW YEAR, NEW AUTHOR, for this theme, read any book by an author you’ve never read before! Shadow and Bone was not my original choice for this months theme but when it came down to it I had a bit of a shift in mood, so it was the perfect fit. 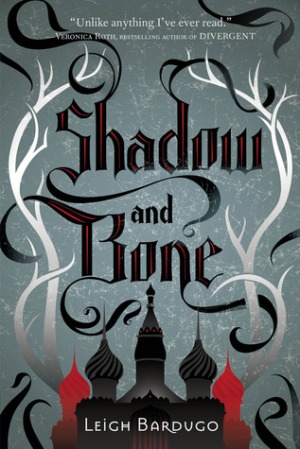 Surrounded by enemies, the once-great nation of Ravka has been torn in two by the Shadow Fold, a swath of near impenetrable darkness crawling with monsters who feast on human flesh. Now its fate may rest on the shoulders of one lonely refugee.

Alina Starkov has never been good at anything. But when her regiment is attacked on the Fold and her best friend is brutally injured, Alina reveals a dormant power that saves his life—a power that could be the key to setting her war-ravaged country free. Wrenched from everything she knows, Alina is whisked away to the royal court to be trained as a member of the Grisha, the magical elite led by the mysterious Darkling.

Yet nothing in this lavish world is what it seems. With darkness looming and an entire kingdom depending on her untamed power, Alina will have to confront the secrets of the Grisha . . . and the secrets of her heart.

This book was everything I hoped it would be, I’ve heard a lot of good things about Leigh Bardugo but haven’t had the chance to read anything until now. With so much good press I sometimes get a little worried that it’s going to fall totally short of the mark, thankfully though this lived up to my expectation.

First off the worldbuilding was amazing, there was enough there that I felt totally immersed in it but it didn’t slow down the story in any way. I loved the Grisha and all the different things they can do, and the description of the Shadow Fold and how it came to be was fascinating.

I really like Alina, loved that she was kind of the outcast with the First Army and with the Grisha but she has such a snappy personality, a little out of her depth but then also really sharp. She’s also very persistent, she doesn’t give up, even when things are stacked against her. I loved how she doesn’t change into a completely different person when finds her power, she’s a little more confident but doesn’t let it go to her head.

I found the Darkling fascinating, he’s one of those characters that I should probably feel bad for liking but I can’t help it, he’s mysterious and seems to have a different face for different people. You witness a very harsh side to him but with Alina, he shows vulnerability, then by the end you are left wondering how much of what he’s shown is the real him.

Whilst I wasn’t sure of Mal, Alina’s best friend, in the beginning, which I think was because there really wasn’t much to him at the start, nearer the end when we got to know him a little better I really warmed to him. I liked his and Alina’s relationship, how he realises once she’s gone how important she is to him and the things he does just to try and see her again.

I really enjoyed the storyline, I don’t want to say too much because I don’t want to give anything away but what I will say is that the only reason that I haven’t given this the highest rating is that even though I loved the adventure I didn’t feel all the tension I was expecting to.

This is a brilliant start to a series and I am so looking forward to getting my hands on the next book.

Angel’s Cage by Anna Zaires
The Upper World by Femi Fadugba
Jade Fire Gold
Devil’s Lair by Anna Zaires
The Lighthouse Witches by C.J. Cooke
This Is Our Rainbow by Katherine Locke & Nicole Melleby
The Last Graduate by Naomi Novik
The Man Who Died Twice by Richard Osman
Apples Never Fall by Liane Moriarty
Loading Comments...
%d bloggers like this: