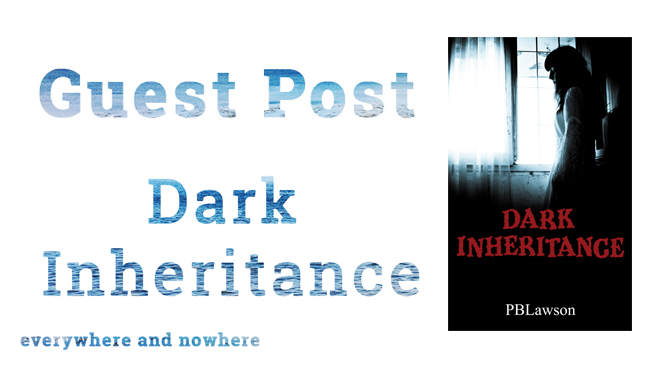 Today I have author PB Lawson dropping by to share his thoughts on some questions that came up after the release of his book Dark Inheritance.

A serial killer is on the loose and a prominent doctor discovers she is not the person she grew up believing herself to be.

These seemingly unrelated characters find themselves drawn together by an ancient lineage.

Detective Doug McKenna is baffled by a series of bizarre killings that have shocked the city of Toronto. All the victims have had their throats brutally slashed, yet there is little blood at any of the crime scenes.

Dark Inheritance questions the concept of good and evil and looks at how an ancient predisposition for evil might be genetically passed from generation to generation.

Since the publication of ‘Dark Inheritance’, I have been asked a number of times whether I believe all murderers would have to be sociopaths or psychopaths.

Most murders are committed because of disagreements among family, through gang violence, financial problems, and disputes among friends and lovers. The killers might have a mental condition, but the condition is not the reason for the murder.

The CEO of a large company could be a psychopath, but this doesn’t mean that his position came about because of his condition—or that he’ll begin to murder staff he doesn’t approve of.

But what about the killers who murder simply for the satisfaction of their unusual needs — the murderers I write about — who treat other humans as mere pawns in their pursuit of personal gratification?

Even these are not necessarily sociopaths or psychopaths. But they could be.

We tend to bandy the words sociopaths and psychopaths about, but most of us don’t really understand their actual meaning.

Psychopaths are thought to have been born that way — in other words, the condition is genetic.

Sociopaths are created by an abused or unhappy childhood.

Psychopaths don’t have a conscience. If a psychopath kills you, he’ll feel no remorse whatsoever.

Sociopaths have a conscience, but only just. If a sociopath kills you, he may feel a twinge of remorse. But just a tiny one.

If a psychopath kills, he will be extremely difficult to catch, because he will plan well.

A sociopath, on the other hand, is more likely to kill spontaneously and will probably leave clues all over the murder scene.

In my writings, I tend to have my villains justify their anti-social behavior as survival of the fittest. But their actions go beyond that — they evolve into simple self-gratification.

And they tend to be intelligent and difficult to catch.

So they are probably psychopaths.

Also in Dark inheritance, a psychologist explains to a detective:

What I’m talking about is the sixth sense we all have but most of us ignore…or have lost the ability to recognize. How many times have you heard someone say, after something bad happens, ‘I had a funny feeling about that’? But they ignore it because it’s not ‘logical’. I believe these killers will have this intuitive sense honed to a fine point. And most importantly, they’ll respond to it.

Do I believe in a sixth sense? Yes. One hundred percent. I’ve experienced it as both a vague feeling of unease and once, as a very graphic dream.

What triggered this dream — this window into the future? I don’t quite know. But that window was opened, and it was absolutely amazing.

I’d crossed the Atlantic in a forty-foot sailboat I’d purchased in the Dominican Republic some three months previous. I had the bill of sale for the boat but no actual ownership papers—which presented no problem all the way to Syracuse in Southern Italy. My next stop was Malta, about a day’s sail south

The night before I set sail for Malta, I had my incredible dream.

Most of my dreams go all over the place with maybe a theme, but little logic. This one was a precise narrative. Exactly as if I were watching a movie.

In the dream, I was taken to a room by a uniformed police officer with a large hooked nose and a bushy black mustache. Once inside, I was ushered to a seat facing a man in civilian clothes who proceeded to ask me questions as to how I’d come by the boat and record my answers on an old Underwood typewriter.

The typist had sparse dirty-blond hair and a thin mouth and did not look at me when he asked his questions.

None of this was the slightest bit vague. I could see every detail of that room, including where a piece of plaster—shaped like an inverted triangle—had crumbled away from a corner of the ceiling.

My dreams don’t normally come in such detail. And usually, upon awakening, all but the basic details would slip from my mind. But not this one. It was as if I’d actually been in that room.

Well, when I landed in Malta, my dream came true. The characters were the same as I’d dreamed. The typewriter was an old Underwood and the triangular piece of plaster was missing from the ceiling.

How is it possible to see into the future? It baffles my logical mind. All I know, without any doubt, is that it is possible.

I was born and raised in Sydney, Australia but now live in Toronto, Canada where my two children reside.

I have always been fascinated by the apparent paradox of ‘man the animal’ and ‘man the higher being’ and have woven this issue into the plot of ‘Dark Inheritance’. During research for the book I had extensive conversations with two convicted murderers, affording me, I believe, an insight into a killer’s mind.

An avid sailor, I have navigated small boats across the Pacific and Atlantic oceans and through the Mediterranean Sea, experiencing the exhilaration and terror of three hurricanes during my voyages.