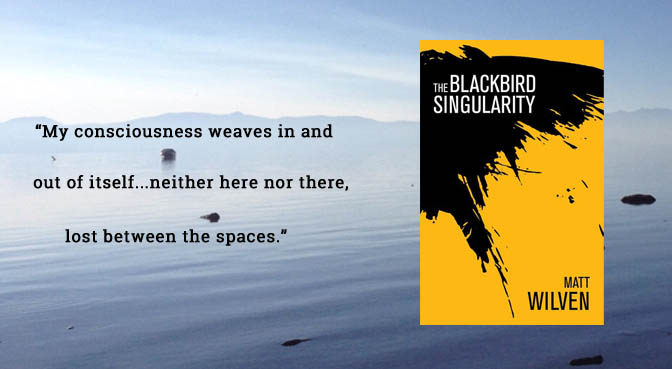 Vince stops taking his lithium when he finds out about his partner’s pregnancy. As withdrawal kicks in, he can barely hold his life together. Somewhere between making friends with a blackbird in the back garden and hearing his dead son’s footsteps in the attic, he finds himself lost and alone, journeying through a world of chaos and darkness, completely unaware of the miracle that lies ahead.

Here, I’m not just a lost and hopeless man…I’m in a safe place, fighting to get through a dark time, taking an isolated opportunity to try to come to terms with some of the blind spots in my mind.

The Blackbird Singularity is a book about loss, not just in the sense of bereavement but also losing yourself. After his son dies, Vince spirals into a black hole that he only manages to surface from with the help of lithium. However the lithium makes him cloudy and when he finds out his wife, Lyd, is going to have a baby, he decides to stop taking them. What follows is an uncannily honest view of how someone experiences withdrawal and how those around them react to it.

The way the book moves through the stages of withdrawal, as he deals with his grief, draws you in and makes you feel as if you are going through it with him, finding logic in seemingly deranged situations. The brilliant thing about this book is how the rest of Vince’s family and friends act around him, the way they set him apart and treat him, is a very realistic look at how our reactions to people with mental health issues isolates them. A comment on how people strive to be accepting but that there are always limits. Another exceptional aspect is the juxtaposition of Vince being the one diagnosed with a mental condition, but yet it is his friends that are behaving as if they have lost their senses. For me this highlighted the fact that we as humans all have maniacal moments, and that there are only a few degrees separating what’s considered normal and what is considered unbalanced. The way these qualities have been written made the characters entirely genuine, the way they react to the situations they find themselves in and to those around them, it is as if you are looking at a snapshot of human life.

There was only one moment in the book that I felt suddenly unconnected. It was possibly just my perception; however there was a point where I thought Vince was beginning to overcome the withdrawal and then recedes in a way that felt very unrealistic. Although this could be an observation on how extreme circumstances can make these issues flair up at any stage, it did make me take a step out of the story.

The way the book mixes such a heavy topic with a myriad of other subjects and elements such as humour, philosophy, psychology, science and an almost light-hearted look at the human condition made it a pleasure to read.

Thank you to Legend Press and Netgalley for the review copy of this book.