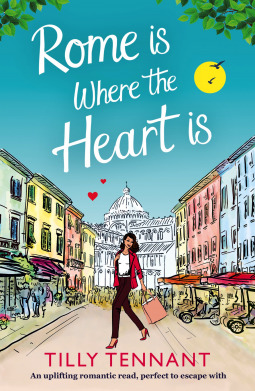 Can a holiday romance ever have a happy ending? Escape with Kate to the sun-drenched city of Rome where a love affair is just about to begin …

When Kate’s husband Matt dumps her on Friday 13th she decides enough is enough – it’s time for her to have some fun and so she hops on a plane to Rome. A week of grappa and gelato in pavement cafes under azure blue skies will be just what the doctor ordered.

What she doesn’t count on is meeting and falling for sexy policeman Alessandro. But the course of true love doesn’t run smoothly – Alessandro has five meddling sisters, a fearsome mama and a beautiful ex Orazia. They’re all certain that Kate is not the girl for him.

Can Kate and Alessandro’s love last the distance? Or will she return home with the one souvenir she doesn’t want – a broken heart …

Rome Is Where The Heart is will be published on 9th March 2017.

This was a crazy, doomed romance, and she had instigated it, encouraged it, made it an impossible thing that neither could live without but might yet break both their hearts. She should have listened to the voice in her head that told her to leave well alone, should have walked away while she had the chance and filed Alessandro way as a brief, fun flirtation on her first holiday as a single woman.

When her childhood sweetheart leaves her then sends divorce papers, Kate decides that now is the time to do things that she’s not been able to do whilst married. The first thing on her list is going to Rome for a holiday. She certainly doesn’t expect to meet anyone or develop feelings for them, especially not a local. With the end of her holiday looming will the relationship manage the long distance or end up just a holiday romance?

What really drew me to this book was Rome as a setting. I’ve never been but I love reading about places that I’ve not managed to visit yet, so that I can get a glimpse into what it’s like. I was able to picture the city really well from the descriptions and loved how it was depicted, that it touched upon the landmarks but we also got a look at the paths less travelled as well. This book has definitely made me feel like I want to go off on an adventure!!

Whilst it encouraged the traveller in me I did have an issue with this book, and unfortunately, it was kind of a big one, I didn’t find the relationship between Kate and Alessandro very inspiring or believable. Let me clarify, I thought the way that they met and then ended up running into each other again was fine; I was on board with him offering to take her out and show her the sights (because this has actually happened to a friend of mine); what I couldn’t get my head around was that suddenly Kate is love with him, having lots of conflicting thoughts about him and then starts almost obsessing about his ex.

There was no lead up to this relationship, and in my opinion very little development of it, I know that there was the time constraint factor but it was too rushed, I didn’t feel anything for them being together and it began to feel a little stale. I also think that anything to do with Orazia should have been taken out, it felt like it had been added in for a bit of drama to create a tension but didn’t really go anywhere and again wasn’t developed enough to make any real mark.

Having said that I loved the relationship between Kate and her sisters, it was really well portrayed. It felt very realistic and there were plenty of times that I could relate to a situation, like when they were bickering or got mad at each other. I can imagine that Anna might not be too popular but I liked her, she was quite hard on Kate sometimes but it was a good dose of pragmatism and I admired that she was the voice of reason to Kate’s flight of fancy. I also thought it was great how even when they didn’t see eye to eye they still supported each other, the way the author writes about the sisters you can see how they feel about each other without having to be told.

Alessandro’s family also felt really dynamic, like the type of people you do want to be brought into the fold with. A large family, having lunches together with amazing food and all with big personalities, they really gave extra character to the setting. Personally, I think this book would have been more compelling and plausible if there had been more of a conflict involving Alessandro, Kate, and his family. That would have been some serious sparks.

It was also great to see Kate turn her life around, and demand better for herself. I appreciated that even though she did want to follow her new dreams that she was practical about it, and I came away feeling hopeful and that maybe dreams aren’t as far away as we think.

Rome Is Where The Heart Is would make a great summer read, it’s an uplifting book that you can escape into. Even though I wasn’t convinced on the romance aspect, the relationships between the other characters and the brilliant description of Rome are what really made this book for me.

Thanks to Bookouture and Netgalley for the review copy of this book.

2 thoughts on “Book Review: Rome Is Where The Heart Is”