Today is my stop on the blog tour for The Evaporation Of Sofi Snow and I’ll be bringing you my thoughts as well as a giveaway for those of you in the US and Canada. 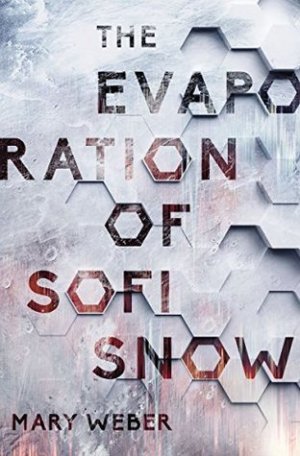 Ever since the Delonese ice-planet arrived eleven years ago, Sofi’s dreams have been vivid. Alien. In a system where Earth’s corporations rule in place of governments and the humanoid race orbiting the moon are allies, her only constant has been her younger brother, Shilo. As an online gamer, Sofi battles behind the scenes of Earth’s Fantasy Fighting arena where Shilo is forced to compete in a mix of real and virtual blood sport. But when a bomb takes out a quarter of the arena, Sofi’s the only one who believes Shilo survived. She has dreams of him. And she’s convinced he’s been taken to the ice-planet.

Except no one but ambassadors are allowed there.

For Miguel, Earth’s charming young playboy, the games are of a different sort. As Ambassador to the Delonese, his career has been built on trading secrets and seduction. Until the Fantasy Fight’s bomb goes off. Now the tables have turned and he’s a target for blackmail. The game is simple: Help the blackmailers, or lose more than anyone can fathom, or Earth can afford.

I have to admit I feel a bit confused about this book, hopefully, I’ll manage to explain why.

What drew me to the story was both the aliens and the gaming, when it’s starts Sofi and her team are in the thick of it, and whilst I found that I was intrigued by the idea of the games at that point I didn’t know enough about the world for it to have the impact it probably should have had.

There was a lot to take in this book, both the dystopian reality of Earth and the introduction of the Delonese. Unfortunately, I don’t think it reached it’s full potential, for me there was just too much going on and whilst I had been excited by the idea of both, I think the focus should have been on one or the other. It was a lot for me to take in and meant that I had an awful lot of questions that I don’t think have been adequately answered.

I understand that this is the first book in a series, however, I really think that even in a series of books that you need to tie up as much as you can otherwise you risk losing plot lines to obscurity and I get the feeling that this might happen.

It is an intriguing book and I had this need to know more so it definitely has a storyline that catches attention but there’s so much that I would like clarified that it’s almost frustrating, especially as I’m not sure if it will be answered in the next book.

I didn’t connect with Sofi as much as I would have liked because she seems like a character I could get behind; rebellious, smart and not willing to bow down. I liked the glimpses we got into her past because it explained her motives and opened her up to the reader a little more but again it could have gone deeper.

I quite liked Miguel more for his element of mystery and bi-linguality than anything else. I’m glad that his and Sofi’s relationship wasn’t an insta-love type affair, that would have killed it for me personally, though I think I might need to wait until the next book to decide how I feel about it.

The thing I loved most about this book is the relationship between Sofi and her brother Shilo, even though you don’t get to see much interaction between them, through Sofi’s determination to find him and the dreams she has about him you can tell that it is a strong bond. I admire that this was the focal relationship in the story, it felt so genuine and something that most people can imagine easily.

I think this story has a lot of potential but I felt that it doesn’t work as well as it should on its own, I will need to read the next book in the series to get a better feel for it, which is a shame because it has a lot of elements that would usually make me fall in love with a book. I would still recommend this book because it’s interesting but maybe with a little warning that you’ll have a lot of questions.

everything in the picture – a backpack, earphones, hardcover copy of the book

If you want to find out more about the book then be sure to have a look at the rest of the stops on the tour by clicking the button.

Mary Weber is the multiple-award-winning author of the bestselling young adult Storm Siren Trilogy, and The Evaporation of Sofi Snow series (all by HarperCollins). An avid high school, middle school, and conference speaker, Mary’s passion is helping others find their voice amid a world that often feels too loud. When she’s not plotting adventures involving tough girls who frequently take over the world, Mary sings 80’s hairband songs to her three muggle children, and ogles her husband who looks strikingly like Wolverine. They live in California which is perfect for stalking L.A. bands, Comic-Con, and the ocean.

You can also find Mary’s fun interviews in the paperback of Marissa Meyer’s NYT bestselling, CRESS, and in Jay Asher’s 13 REASONS WHY movie tie-in edition. Most recently, you can see her and her family as extras in the NETFLIX Original Series, 13 REASONS WHY.

The Maddest Obsession by Danielle Lori
Something a little different for the weekend, spending my afternoon at the Aye Write book festival, got a couple of events lined up for the rest of the day but kicked off by a fabulous event with Sue Black.
The Knave of Secrets by Alex Livingston
Hex by Jenni Fagan
Slay by Brittney Morris
Four Aunties and a Wedding by Jesse Q. Sutanto
The Storyteller by Dave Grohl
The Sweetest Oblivion by Danielle Lori
Rizzio by Denise Mina
Loading Comments...
%d bloggers like this: