To round of the week, I have a guest post from author Rachel J Bonner introducing some of the characters in her latest book Thread of Hope.

The enthralling sequel to the compelling Strand of Faith.

What if your secrets are so dangerous they could destroy the one you love?

Leonie may have run away but Prospero will find her. He loves her and he wants a future with her by his side whatever the consequences. Only when he does find her, he ought to tell her who he really is, outside the monastery. That’ll make her run again. Dare he risk it? But if he doesn’t tell her, someone else may…

Marriage to Prospero is what Leonie wants most and the one thing she knows she can’t have. If he found out what she was really like, what she’d been, what she’d done, he’d despise her and she couldn’t bear that. Better to leave now than live a lie – but it’s harder than she expected. If only…

Gabriel is starting to discover the secrets inherent in Leonie, secrets that not even she knows, secrets that will tear the world apart. And the secrets he is keeping are tearing him apart. How can sacrificing those he loves possibly achieve peace when everything he discovers risks the death of millions?

An Introduction to Some More Characters

On the blog tour for Strand of Faith, I introduced you to three key characters, Prospero, Leonie and Andrew. If you missed that, you can read about them here http://www.racheljbonner.co.uk/page13.html.

Today, I thought I’d introduce you to a few of the other characters.

Lord Gabriel is both the High Lord of House St Peter and the Abbot of the monastery there. Fortunately he’s very good at delegation. Brother Benjamin runs the hospital, Lady Sarah manages the college, Sister Elizabeth is in charge of the convent and Lady Eleanor handles anything to do with the part of the Great House that isn’t a monastery.

Gabriel is in his late fifties and has been a monk for about thirty years. In his teens he spent some time living and travelling with Traders. He is very Gifted, having all the major Gifts – telepathy, telekinesis, pyrokinesis and precognition – and extremely powerful, but he uses his Gifts as little as possible. His strongest Gift is precognition and he sees visions of possible alternative futures, along with the knowledge that his actions will determine which future actually takes place. This terrifies him.

Lady Eleanor is the same age as Lord Gabriel and also spent time with the Traders in her teens. She married young, to Harry, and went away to live with him in a different Great House. Harry died when their daughter, Melanie, was very young, and Eleanor and Melanie then came to live at House St Peter to be near Eleanor’s brother. Eleanor is very capable, very organised and many people at House St Peter (and elsewhere) find her slightly scary.

She’s an avid reader and has a (secret) addiction to romantic fiction, but it has to have a happy ending. She’s also very Gifted, with one of her key skills being telepathy, although again she doesn’t use it much. I think there is some history between her and Brother Benjamin, but I haven’t found out what – yet.

Sister Chloe is one of the nuns. She’s in her early twenties, with deep brown eyes and mousy brown hair. Like Eleanor, she’s very organised and so, despite her youth, she runs Lord Gabriel’s office, schedule and communications. From her teens, her only ambition was to become an nun, and she’s one of those people who is always happy, always content, always sees the positives in everything. Chloe is definitely telepathic, but she can also see what’s happening in other people’s dreams if she is near them when they are asleep.

Turns out, she’s also a really skilled manicurist. And she likes chocolate chip cookies – the ones with gooey middles.

The Them. Every Gifted adept has nightmares as their Gifts develop, based on their worst fears and experiences. The nightmares are different for each adept, and the stronger their Gifts are, the worse and more terrifying the nightmares. Leonie’s nightmares are peopled by the Them, always dressed in black, hooded and cloaked, always reaching for her. If she runs from Them, they chase her; if she attacks, they fade away and reform elsewhere. If there are real people around when she’s having a nightmare, she’ll see them as the Them. You’ll have to wait until book 4, Cloth of Grace to find out the full story behind the Them, but here’s an early appearance from Strand of Faith.

The Them were coming for me and the only thing I could think of was that I needed to get back to the campus. The Them swirled around me, cloaks and hoods billowing in the breeze. I had no weapons, nothing I could use and they were coming towards me, getting closer and closer, surrounding me. I took my courage in both hands and charged into the Them who were directly in my path. They melted away like mist as I reached them, but now they were behind me and chasing me. I ran and ran but somehow they appeared ahead of me. I grabbed a sword which turned to a javelin in my hand so I threw it. Now the weapon melted away but the Them were still there. I gathered the power, throwing it directly at them as I ducked sideways. I was running through treacle; I struggled against it knowing they were closing in on me and I couldn’t get away.

If this has piqued your interest then you’ll be pleased to know there is a giveaway, click the link below to be in with the chance of winning…

Signed copies of both Strand of Faith and Thread of Hope, plus bookmarks and business cards that match each book, and one of the Holding Crosses that the monks and nuns have. 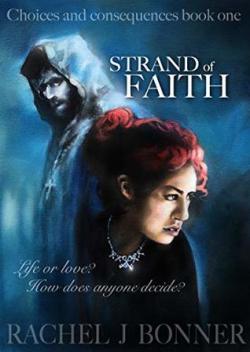 A girl. A monk. An unthinkable sacrifice.

When the choice is between love and life, how can anyone decide?

In a post-apocalyptic future, a girl and a monk, both with extraordinary mental powers, have compelling reasons not to fall in love. But their choices will have consequences for the rest of the world.

After the troubles of his youth, Brother Prospero has found comfort and fulfilment in the monastery. Then he discovers something that forces him to reconsider his whole vocation. How can it possibly be right to leave a life of worship and service for human desire? And if he does leave, will the pressures from his past destroy him?

Orphaned and mistreated, Leonie has found sanctuary and safety at the Abbey. When she comes into contact with Prospero everything spirals out of her control. Everyone she’s ever loved has died. She can’t do that to him. But how can she walk away from the first place she’s truly belonged?

Abbot Gabriel is faced with an impossible choice. He can do nothing and watch the world descend into war. Or he can manipulate events and ensure peace – at the cost of two lives that he is responsible for. Is he strong enough to sacrifice those he loves?

Rachel J Bonner is the author of the four book Choices and Consequences series, the first of which, Strand of Faith, is due out in November 2018.

Getting a degree in engineering, followed by a career in accountancy is probably not a conventional path to becoming an author, particularly in paranormal romance. Rachel says that, although accountancy isn’t anything like as boring as everyone thinks, writing is a lot more fun. When not writing, she can be found walking in the beautiful countryside near where she lives, which has influenced much of the scenery in her books, or shooting things with her local archery club. Target shooting only, honest. Nothing to worry about.