To round off the week I have an excerpt from The Peacock Room. 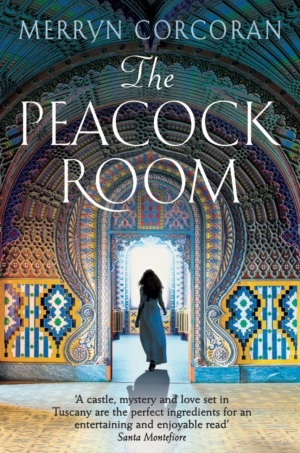 When Allegra O’Brien discovers her husband’s infidelity, her world is shattered and she seeks solace in the sanctuary family. Her Italian grandpapas’s tales of legendary Mama Cosima and the mysterious Peacock Room reawaken her love of historic, interior architecture, inspiring Allegra to take a trip to Tuscany to learn more about her heritage.

While a dangerous encounter throws her off course, a handsome stranger helps Allegra discover there is more to her family history than she could ever imagine. With her new-found confidence, and in the wake of her grandpapa’s illness, Allegra makes an unexpected discovery, and finally commits to fulfilling the promise she made to solve a family mystery.

Richly laced with the colours and contours of Tuscany, and the kaleidoscopic beauty of Sammezzano Castle, this full-bodied romance will captivate you to the very end.

Allegra scurried to the side of the building, where she spotted a lesser doorway, then down a couple of steps to what looked like a lower-ground floor. Again, she knocked and called out. A new type of silence presided – an enticing silence. She shoved the rickety door and without much effort it fell open into a musty-smelling abandoned kitchen. ‘Circa 1980, I’d say,’ she muttered wearily.

There was just enough natural light for Allegra to see, and spotting a towel hanging by the cooker, she briskly rubbed the excess water from her shirt and jeans. Then she rubbed her hair. Wow! I feel like I’ve had a cold bath. A renewed invigorating buzz swept over her body.

Discarding the towel, she surveyed the kitchen and walked over to a large door at the back, which in turn led to a staircase. Allegra was immediately drawn to the elaborate Moorish wallpaper accompanying the upward stone stairs. As she moved closer, she could see that it wasn’t actually wallpaper, but beautiful tiles. Stroking the slippery colourful porcelain with her hands, she felt compelled to follow the stairs. The rich colours were calling her.

She flicked the light switch but to no avail – the electricity must have been cut some time ago. She carefully negotiated the steps whilst sliding her hand along the furrowed tiles for balance. As she reached the top of the stairs, lack of light was no longer an issue as the rain had ceased, allowing the sun’s weak rays to pour into the space in front.

She couldn’t believe her eyes. It must be a dream.

The interior design of this room wasn’t Italian at all. It was entirely Moorish! The room was swathed from floor to ceiling in the most magnificent tiles. The most prominent colour in the mosaic floors was terracotta, interspersed with sharp blacks and browns. The walls featured an array of blues in all shades of turquoise and aqua. An intricate frieze a third of the way up from the floor, introduced a key line of pink, followed by bordered areas of a design similar to fleur de lis. The final section that connected the wall to the ceiling featured rows of diamond-shaped tiles.

Allegra rubbed her eyes. Was she in a film set? Was she still hallucinating? As that thought rested in her brain, her eyes were drawn to the doorway on the far side of the room. It sat perfectly, a classic half-moon Moorish shape with porcelain pillars incorporated into the structure.

She stepped through the doorway to a new room – there were no hallways, only doors leading into adjoining rooms. This one gave off a sense of purity in all shades of white. The Moorish influence had been intense. The fully tiled walls were embellished with intricately carved flourishes as they reached up to a mezzanine floor. The room had four grand entrances, each announced by a group of tall pillars.

Allegra lay down on the floor so she could take in every part of this architectural masterpiece. The pillars were repeated on the mezzanine level, where smart, colourful, lead-light windows had been built to allow a drenching of natural light down into both levels. After some time – minutes, maybe hours – she hauled herself up. It seemed a massive decision as to which door to go through next. Her legs made the decision for her as she lightly stepped through the right-hand side.

The abundance of light had been cleverly harnessed to shine through the tall stained-glass windows. She rubbed her eyes in disbelief. My God. I’m in my grandpapa’s place. This is the Peacock Room!

From the vaulted ceiling, down to the polished floors, there was a vast array of mosaic tiles, painstakingly and strategically laid in the colours of an enormous peacock.

Merryn Corcoran was born in New Zealand and has enjoyed success in the business world. In addition to writing, Merryn is the London ambassador for Beau Joie champagne. She also works for London-based Cork Films as executive producer and publicist, with its most recent movie The Stolen released in UK cinemas in October 2017. Merryn has been a keen supporter of UNICEF for the past 14 years, chaired and organised an annual celebrity Gala Ball in London and raised approximately £100,000,000 for the charity. She was made a UNICEF Honorary Fellow (UK) in 2002.
Merryn’s previous novels The Silent Village and The Paris Inheritance were bestsellers in New Zealand. She divides her time between Menton in the south of France, London and New Zealand.