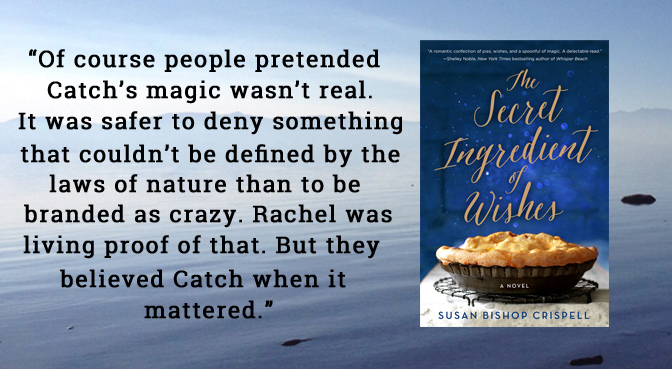 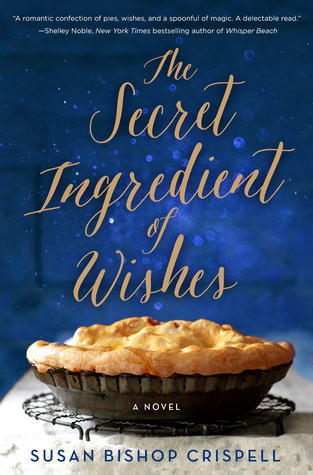 26-year-old Rachel Monroe has spent her whole life trying to keep a very unusual secret: she can make wishes come true. And sometimes the consequences are disastrous. So when Rachel accidentally grants an outlandish wish for the first time in years, she decides it’s time to leave her hometown—and her past—behind for good.

Rachel isn’t on the road long before she runs out of gas in a town that’s not on her map: Nowhere, North Carolina—also known as the town of “Lost and Found.” In Nowhere, Rachel is taken in by a spit-fire old woman, Catch, who possesses a strange gift of her own: she can bind secrets by baking them into pies. Rachel also meets Catch’s neighbor, Ashe, a Southern gentleman with a complicated past, who makes her want to believe in happily-ever-after for the first time in her life.

As she settles into the small town, Rachel hopes her own secrets will stay hidden, but wishes start piling up everywhere Rachel goes. When the consequences threaten to ruin everything she’s begun to build in Nowhere, Rachel must come to terms with who she is and what she can do, or risk losing the people she’s starting to love—and her chance at happiness—all over again.

The Secret Ingredient of Wishes will be published on the 6th September 2016.

I know you and Catch think the town brought you here to find him, that it wouldn’t let you leave when you tried to bail after everyone found out about the wish thing. But I think you’re letting the magic of Nowhere go to your head, making you think things that can’t possibly be real.

Rachel has a secret; she can make wishes come true. Unfortunately these wishes don’t always go to plan and people get hurt, which she knows all too well. After unintentionally granting a wish, when she thought that she had control over it, she begins to worry that she will hurt her friends and leaves town. She ends up in Nowhere, North Carolina, where she meets Catch who can bake secrets into pies, and hopes that maybe she will discover a way control her ability.

The Secret Ingredient of Wishes is a really easy going read, perfect for if you’re in the mood for a more light-hearted story. I don’t think I’ve read a book before that involves magic, which doesn’t have a fantastical world attached to it. I thought this was a really nice idea and liked how she blended the fantasy into the realistic small town world.

There were a few things that I wasn’t keen on…the romantic interest Ashe, who everyone seemed to be pushing her toward but eventually, for me, fell a little flat. He still has some unresolved feelings over his ex and it did feel like a bit of a let down that it was built up by many of the other characters for nothing too exciting to happen between them.

There was also Lola, Rachel’s “rival”, there was something that didn’t sit right with me about Lola, I got a few mixed messages from her. She has a best friend who is lovely, but is then very catty to Rachel and it is made clear that other people aren’t all too fond of her either; she wants to find her sister to reconnect but then goes to Catch trying to convince her to bake her a secret to cover up something very hurtful.

I also felt like the story was maybe a bit unresolved, as if it ended at about 75% through. Personally I thought there were a few things left unanswered, that should have been dealt with.

Still this was made up for by Catch, who I really admired for her no nonsense attitude. I thought she was written superbly, and even though by all accounts the magical element of this book could have come across as ridiculous, her character managed to keep it grounded.

Also I have to mention the pies! The descriptions of them making the pies and what was in them, was more that enough to make me crave something sweet or anything peach related. I would recommend having some delicious snacks available when you read this, just in case.

Thank you to St Martin’s Press and Netgalley for the review copy of this book.