As well as being given the chance to review The Wave, which you can find here, I am also hosting a Q&A with author Lochlan Bloom. Before I get to the questions here is a little reminder of what the book is about… 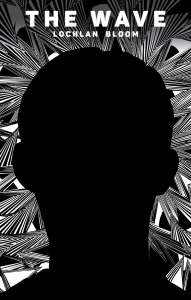 When μ returns home to find a sinister screenplay has arrived from Brazil it propels him on a quest to track down a character he believes to be called Ddunsel.

As μ’s search progresses it slowly becomes entangled with two parallel tales – the stories of DOWN, a troubled publisher, and David Bohm, a real-life quantum theoretician in post-war São Paulo.

Just how far is it from London to Gotham City? Or from Paul Auster to Pierre Menard for that matter?  Some people may think these sorts of questions are idle and ultimately meaningless but this book is not for them.

The Wave combines multiple narratives to blend metafiction, historical fiction and screenplay as each of the characters struggles to understand what is reality and what is fiction.

A terrible solitude was transmitted directly through that silence. It was something that frightened him and yet, at the same time, he could sense with a coldly rational, logic that this silence was the only true form of completeness. The silence was what had existed before the beginning of the world. The silence was what slept inside everybody.

Was there a specific thought or piece of research or idea that sparked The Wave?

No specific thought but I suppose some of the research was sparked by a general interest in what reading and writing can be and how we turn writing into the theories that define us.

You’ve written screenplays, articles for magazines and short stories, did you find the transition to a full length novel easy or daunting?

It wasn’t something I considered too much before starting. I had a concept of what I wanted to accomplish with The Wave and once I started putting ideas down it developed fairly naturally. That’s not to say it all flowed out in a Kerouacian spurt of automatic writing as there were certainly sections that felt difficult as I was working on them but I never thought too much about it as a transition as much as another project.

The Wave is a very difficult book to summarise, do you find it frustrating when people ask what it’s about or have you managed to come up with an easy way to answer the question?

No unfortunately I’ve not found any easy way as yet. Going back to your question about the process being daunting, this is one of the things I never really considered at the start and which is more difficult than I would have imagined. Being able to sum a book up in a short paragraph is obviously a huge part of selling it but I don’t find The Wave particularly easy to summarise.

You’ve used a mix between traditional narrative and screenplay in The Wave, did you set out knowing you wanted to combine the two, and what made you decide to do so?

The idea to mix script and prose formats was there from the start as I wanted to break up the narrative and ask the reader to question how different sections were linked. I didn’t want to create a series of stories that all linked up neatly at the end and the reader could put down the book and forget about it.

In Cloud Atlas for instance I enjoyed the way all the parts line up and link but it all felt a little to neat. That’s not the way the world works. In real life there are hints at connections that are never resolved, things that don’t make sense, apparent rules that are never explained.

The standard directionality of a novel with beginning–middle-end is a tried and tested approach but it didn’t seem so well suited to explore ideas of connectedness from the perspective of theories such as non-locality or implicate order.

Including sections in script format felt a natural way to separate the stories, not only stylistically but also qualitatively in the way each world is described.

There is some crossover between sections of the story, how much planning went into the book and how all the different parts would fit together?

I did quite a bit of planning before I started writing but the novel also developed organically as I wrote. Some sections I planned just didn’t seem to work when I came to writing them and in the end these were some of the most fortuitous coincidences as they became stronger once I realised what wasn’t working.

The Wave is a very unusual book and is exceptionally different to a lot of “mainstream” novels, do you feel that people have been as receptive to it?

I never set out to write something ‘different’ but I guess by the nature of it, the book was never going to be ‘mainstream’. I think a lot of publishers were not particularly receptive initially because of that lack of commerciality and I can kind of understand that. It was great that Dead Ink got behind The Wave and since the book has been out the reception has been great from readers.

The book is a lot more about ideas and experiences than straight forward narrative, did you have a clear picture of how the end product was going to be before you wrote it or did that evolve more naturally?

Yes I had a fairly good idea from the start but it certainly evolved quite a bit as well. If I think back to particular parts or characters it isn’t always easy to remember what was there at the start and what developed later but in essence the themes, concept and general structure have remained pretty much the same throughout.

Was there anything, whilst you were writing, that you thought you wanted readers to take away from your book?

No I think that is up to each reader. I am more interested in asking the questions or getting the reader to ask the questions.

You can buy the wave through Amazon or Dead Ink Books, and you can connect with Lochlan through his Website, Goodreads or Twitter.

Lochlan Bloom is the author of the The Wave as well as the short novellas Trade and The Open Cage. The BBC Writersroom describes his writing as ‘unsettling and compelling… vivid, taut and grimly effective work’. He has written for BBC Radio, Litro Magazine, Porcelain Film, IronBox Films, EIU, H+ Magazine and Calliope, the official publication of the Writers’ Special Interest Group (SIG) of American Mensa, amongst others. Lochlan lives in London and does not have a cat or a dog.

One thought on “Blog tour Q&A: The Wave”