Today I am one of the stops on the blog tour for Deadly Burial, I have a guest post for you and there is also a giveaway, but before we hear from Jon here is what it’s all about…

When DI Chris Sigurdsson is assigned a grisly murder case on remote Salvation Island, he knows that it might be his strangest yet.

A forgotten wrestling star of the 1980s has been poisoned whilst in the ring, and amidst the slippery lies of his dangerous opponents, unravelling the victim’s murky past is almost impossible.

And as a storm threatens to cut Salvation Island off from the mainland, the race is on for Sigurdsson to find the ruthless killer before he strikes again…

When I was a wannabe author, I spent years complaining about not having time to write because I had a demanding full-time job. Part of this was true – I was young and ambitious and regularly working upwards of sixty hours a week. I dearly wanted to write, and felt strongly that I ‘had a novel in me’, but felt that I could do it if only I didn’t have the millstone of my ‘proper’ job around my neck. I became increasingly bitter about the fact that I couldn’t afford to give up work, or take a sabbatical, or attempt a career change from the depressing grind of accountancy. As I grew older, this really did become a problem for me – I began to genuinely resent others who had a more affluent family background, believing that money would equal time would equal writing would equal happiness.

But then, in my early thirties, and thanks in part to some scathing but much-needed feedback from friends and relatives to whom I am very grateful, I realised that the real problem was how I was choosing to use my free time. Because I didn’t spend every last waking minute working. When I wasn’t working, I wanted to have an active social life, and regularly visit lots of friends in different parts of the country, and drink lots, and have lots of hungover lie-ins, and take lots of trips with my girlfriend, and watch lots of DVDs, and play lots of video games, and go to the gym, and… you get the idea.

So my advice to anyone who really wants to write, but believes they don’t have the time, is that when people say ‘you have to make time’, that really is true. But the process is hard. You will have to scrap holidays and use your annual leave to stay at home and write instead. You’ll need to spend entire weekends hidden away, working on your novel, not seeing anyone. You’ll have to turn down invites to social events, nights out, and parties. If you have children, you’ll need to spend some time on your own instead of interacting with them; or, if you’re determined to wait until they’ve gone to bed, you won’t be able to just relax for those last few waking hours with a bottle of wine, watching garbage on the TV. Of course, you can choose to do that – you’ve worked hard, and you deserve to unwind – but if you elect to chill out in your spare time, you are also electing not to write. And years will pass by, and that novel you’ve got in you will never become a reality.

One of the most alarming things I found when my book was published (my gripping murder mystery thriller, Deadly Burial, is available now for download from Amazon for your eBook reader) and I joined a really supportive group of other authors from the same digital label, was that many of them also have demanding full-time jobs too. And yet, somehow, they’ve managed to find the time to get their book written… or in many cases, lots of books. They are a daunting bunch. But that’s what it takes.

an eBook of Deadly Burial 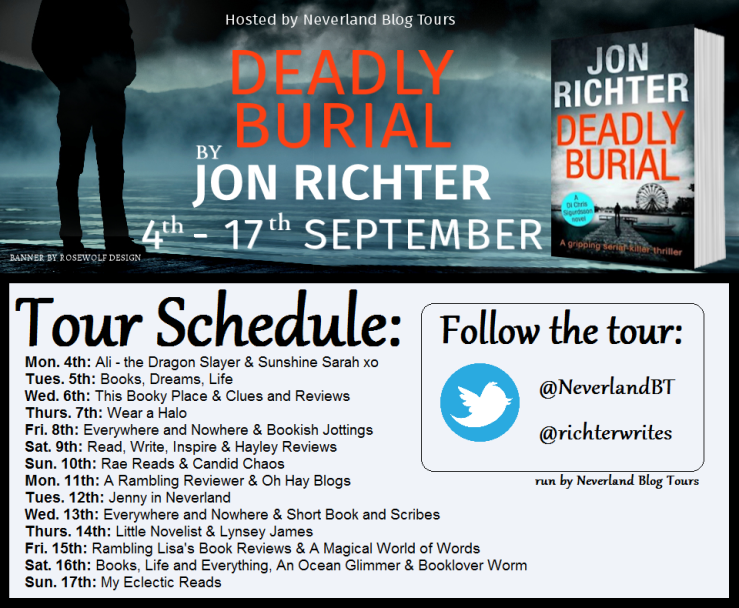 Jon Richter lives in London and spends most of his time hiding in the guise of his sinister alter ego, an accountant called Dave. When he isn’t counting beans, he is a self-confessed nerd who loves books, films and video games – basically any way to tell a good story. Jon writes whenever he can and hopes to bring you more disturbing stories in the very near future. If you want to chat to him about this, or about anything at all, you can find him on Twitter or Facebook.