It’s a blitz weekend for What Goes Down by Natalie K. Martin, I have an extract to share with you and there is a brilliant giveaway but first here is what the book is about… 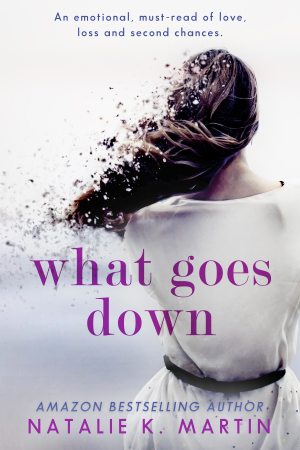 WHAT GOES DOWN is an emotional, must-read novel of love, loss and second chances. Set in the present day and late 80’s, WHAT GOES DOWN deals with relationships touched by mental illness, and is perfect for fans of Amanda Prowse and Julie Cohen.

Seph Powell has all she ever wanted: a close family, loving boyfriend and her dream career. A gifted artist with a highly anticipated exhibition just weeks away, her life seems to be perfect. Until a man she’s never met claims to be her real father.

Laurel and Tony Powell are devoted parents. Having worked hard to provide everything for their daughter, they’ve created an enviable, picture-perfect family. Until Laurel’s ex-boyfriend, Nico, comes back into their lives.

In the summer of 1987, Nico stole Laurel’s heart with promises of adventure and excitement. But when he disappeared without trace, he left her as a single, teenaged parent. Now, twenty-five years later, he’s back and keen to meet the daughter he left behind.

But Nico’s sudden reappearance shows that nothing is quite as it first seems. And as long hidden truths are exposed, everything Seph thought she knew about her life begins to unravel.

Seph stared unblinkingly at the photo that had been attached to the email as her mum bustled into the dining room.

‘God knows where your dad’s got to,’ Laurel said, brushing her hair away from her face as she sat down. ‘The food will get cold if he doesn’t hurry up. He’s always late.’

Her jovial voice suggested that everything was completely normal. Like this was just an ordinary day with no surprise, shock or scandal waiting around the corner. Her face looked the same way it always had: warm and friendly, with an easy smile and kind, hazel eyes. There was nothing to suggest it was the face of someone capable of lying for years on end.

‘Everything alright? You look a bit off,’ Laurel said, her voice coaxing and trustworthy.

It was a voice that had always made it easy for Seph to confide in her, forging a relationship where she felt open and able to speak to her mum about anything. There’d never been a need for secrets, at least, not from Seph’s end and especially nothing as huge as this. Maybe it was a hoax or some kind of elaborate joke. It could even be a case of extremely sophisticated spam. Seph’s eyes flicked down to the phone in her hand, and she forced out a tiny laugh in an effort to make things seem less explosive than they were. Maybe it was like hoodoo. If she didn’t believe in it, it couldn’t be real.

‘I just got an email from some guy…’ Seph tailed off, shaking her head and shrugging her shoulders as she shakily touched the screen of her phone to go back to the email. ‘It’s really stupid, but he says he’s my real dad?’

Laurel laughed lightly, trailing her fingers down the plait hanging over her right shoulder. ‘Spammers these days.’

It was barely there, but Seph saw the slight tremble in her mum’s hand. And what was that look that just flickered across her mum’s face? Unease unfurled its way down her spine, vertebra by vertebra as she handed the phone towards her mum. Laurel stared at the screen but didn’t reach out to take it.

‘Why?’ She laughed again, but it sounded even hollower than it had the first time.

Seph held her gaze until Laurel took the phone with barely masked reluctance, and put it down on the table in front of her. She watched her mum intently as she read, noting the rise and fall of her shoulders as she breathed, the way her back remained rigid and upright in the chair despite the odd angle she had to tilt her head at to read the screen. When she needed to scroll down the email, Laurel touched the screen lightly and quickly, as if it were something that might sting.

‘There’s an attachment, too,’ Seph said.

She breathed quietly as her mum pressed the attachment icon and the image of a baby in the arms of an unknown man filled the screen. Seph sat perfectly still and waited for her mum to look back up at her, still hoping against all hopes that there was a perfectly decent explanation.

Laurel’s shoulders slumped. Seph didn’t need to see her face to know the words written in that email were true. Her deafening silence said it all. Her breath hitched in her throat, sending what felt like a battalion of tears to the back of her eyes, just waiting to fall like soldiers.

Laurel put her hands over her face for a few seconds before dragging them down across her skin and bringing her palms together. She kept her eyes closed as she rested her fingers against her mouth and blew out a long, slow breath through pursed lips. She shook her head before slowly turning it into a nod.

‘Yes.’ Laurel opened her eyes, nodded again and dropped her hands into her lap. ‘It’s true.’

a £10 Amazon giftcard, a Stag necklace and a copy of the book

In 2014, Sheffield born Natalie K. Martin left her corporate job in London to experience the world – heading off on travels that took her as far as Cambodia, India and Thailand, and changed her outlook on life for good. Whilst in India, she self-published her debut novel, Together Apart, which became a No.1 bestseller on the Amazon charts. Her second novel, Love You Better, became a bestseller on release in October 2015.

Never one to shy away from tough subjects, Natalie’s books tackle issues that are relevant and relatable to the everyday woman, and all feature true-to-life characters – people who could easily be your mum, sister, or best friend. This is what she calls: Contemporary Fiction with Love. Natalie’s books have been featured in The Daily Mail, Woman’s Own, Pride Magazine and Female First. She has been interviewed on radio including BBC Radio Sheffield and Manx Radio, and has also written articles for Kindred Spirit Magazine, Do What You Love and Your Wellness Magazine.

A trained Yoga Teacher with a love of surfing, Natalie’s backpack is now taking a short but well-earned rest. These days, she can be found in the historical city of Ulm in Southern Germany, where she’s settled with the charming Bavarian man who swept her off her feet in India. Natalie is represented by Jon Elek at United Agents.