It’s a weekend blitz!! I have a funny guest post from author Kellie but before we get to that here is what the book is about. 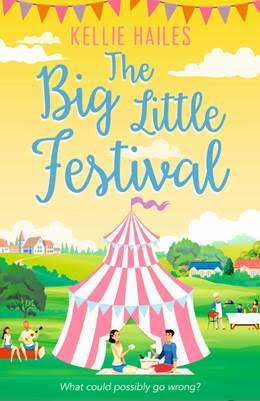 Love happens when you least expect it…

Jodi is panicking. It’s only weeks until her little village in Devon holds its first ever festival and everything is falling apart.

Desperate to avoid disaster, she brings in notorious party planner Christian to save the day. Although she wasn’t prepared for just how gorgeous he would be!

Men are off the cards for Jody and surely Christian is the last man she would ever date? But with tensions rising – along with the bunting and home-made scones – she’s about to find out…

Writing English When You’re A Kiwi

I’ve long held a fascination with small English villages. Growing up on a book diet of Enid Blyton will do that to a girl. Lying about on heather while enjoying lashings of ginger beer sounded like heaven when your reality on the other side of the world amounted to pulling prickles out of your feet after running barefoot on the grass to get your daily glass of Coke, lovingly sloshed into a cup by your mum.

Years later and now having written three books set in a fictional English village it turns out my devouring of Enid didn’t prepare me for the differences between England and New Zealand, because while we both speak English, our language is really quite different, and I’m constantly catching myself throwing in Kiwi sayings and having to hassle my English friends for their translations…

‘On the bones of one’s arse’. This nearly made it into The Big Little Festival when Jody was thinking about the people of Rabbits Leap not having a lot of money. It was changed to another saying, that once researched turned out to be Australian. Finally, my friend’s mother put me right with ‘living on a shoestring’.

Gumboots. Alas, gumboots slipped into The Cosy Coffee Shop of Promises once or twice, even amongst all my studiously changed out ‘Wellingtons’. I now do a search specifically for that word lest it attempts to get in there again.

Chips vs Crisps. You should have seen the Facebook message thread with me getting my head straight on this. In New Zealand crisps are chips. Chips are hot chips. Unless you’re in a place that sells specifically hot chips and then they’re just chips. Sprinkled throughout The Big Little Festival was ‘hot chip’s, which was shortened to ‘chips’. And then of course ‘chips’ were changed to ‘crisps’. And after all that you can believe the desire for something crispy and salty from the potato family was real.

‘How do you say you’re going to the supermarket in England?’

‘So what if you’re going to the post store?’

‘And if you’re going to the stationers?’

How much do I love the simplicity of saying ‘I’m going to the shops’? So much. And it leaves out any chance of my writing about ‘popping down to the dairy’, which in New Zealand is a corner shop, and having my readers think the people of Rabbits Leap like to go and hang out on dairy farms every chance they get.

So all in all I’m slowly but surely getting things sussed. That’s Kiwi for ‘sorted’.

At the age of five Kellie Hailes declared she was going write books when she grew up. It took a while for her to get there, with a career as a radio copywriter, freelance copywriter and web writer filling the dream-hole, until now. Kellie lives on an island-that’s-not-really-an-island in New Zealand with her patient husband, funny little human and neurotic cat. When the characters in her head aren’t dictating their story to her, she can be found taking short walks, eating good cheese and hankering for her next coffee fix.