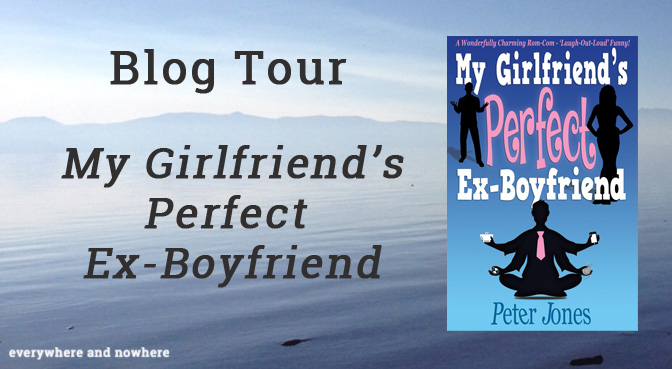 Today I am hosting an extract from My Girlfriend’s Perfect Ex-Boyfriend, in which main character Adrian lets us in on why he’s not that keen on his girlfriends ex. Before we get to that though, here is what the book is about.

Adrian Turner, Mountaineer, Secret Agent, Fireman… Ade would dearly like to be any of these things, though he’d trade them all to win the heart of feisty Public Relations Executive, Paige.

Instead, he’s a disillusioned school teacher, on suspension, after an unfortunate incident with a heavy piece of computer equipment. And somebody’s foot. And Paige? Despite being his girlfriend for the past eighteen months, she still seems to have one foot out of the door and hasn’t quite committed to leaving a toothbrush in the bathroom.

Of course, it doesn’t help that she’s working with her ex-boyfriend, Sebastian. A man who in almost every way imaginable is better, taller, wealthier, hairier, and infinitely more successful than Ade.

Is Paige still in love with Sebastian? Why then did she suggest they get away for a few days? Some place romantic…

But when Adrian finds himself in Slovenia – with Sebastian in the room down the hall – he realises there’s serious possibility that he’s in danger of losing his job, his mind, and the woman he loves…

From best-selling author Peter Jones comes this hilarious romp about love, and the things people do to keep it from getting away.

A word or two about Paige’s ex-boyfriend.

He’s tall. Too tall. Maybe an inch or two short of seven foot, but in any case, much taller than me. And he has hair. So do I – more than most men of my age – but he has a ridiculous amount. Too much. Masses of course, spikey, dark brown, fur. Sometimes I wonder whether it’s actually real. But then, in every photo I’ve ever seen, he always has a day’s worth of stubble, so maybe it’s a genetic thing? Maybe if he forgot to shave, his entire head would turn into an oversized furry rugby ball.

Some might say he’s a handsome man. I’m not one of those people. For a start his teeth are too big. The man can barely close his mouth. Hundreds of great white gnashers in a mouth that’s too wide for his face. Is it any wonder he’s always grinning? Which would be bad enough, but when he isn’t grinning, he’s laughing. It’s like his face only has two modes; smug grin or hysterical laughter. That night – the night I met Paige – he stood on that stage waving his chimpanzee arms around for well over an hour, and most of that time was spent laughing. A presentation that should have been fifteen minutes at most was extended ten-fold by the continuous rat-a-tat-tat machine gun style laughter, from a man who doesn’t seem to know when a thing is actually amusing or not.

The problem is he’s too much. In every way. He’s just too much. Too tall, too hairy, too loud, too brash, too rich… it’s like he’s a walking, talking magnet for the excesses of life. Is it any wonder that he was such a massive part of Paige’s life? He wouldn’t know how to be any other way. Invite this man into your life and he’d just fill up all the available space, and then some. He’s like an over-enthusiastic car air bag.

And that’s the other problem. The real problem. Sebastian came into Paige’s life and filled it up. Took over. He’s all she’s known for too long. Can you blame me for feeling paranoid? For expecting her, at any given moment, to ditch me and return to the arms of a man that, in every way, is better than me. Why wouldn’t she? So he’s arrogant, and big headed, and smug, and cocky – but from where I’m lying, with my handful of mediocre qualities, he has every reason to be. And if I don’t stop torturing myself with this crap and get some bloody sleep, even my mediocre qualities are going to be next-to-useless come the morning.

I get out of bed, wander into the bathroom, open the medicine cabinet, and look for something emblazoned with the words fast, effective relief from your girlfriend’s perfect ex-boyfriend – but there’s nothing. Just aspirin. And bite cream. And nasal spray. And plasters. But nothing to switch off my brain, or help me get to sleep.

Which is when I remember that Paige keeps a packet of anti-histamines in her bedside drawer, for those rare occasions when she too has a bout of insomnia. I walk back to the bedroom, round to her side of the bed, open the drawer, rummage around and…

That’s what the front of the card says. The one laying in her drawer. And under the bright gaudy letters is a cartoon alpaca, frolicking in the long grass, whilst other woodland creatures stand around holding a birthday cake. But instead of an array of cute furry faces, each of the cake bearing creatures has Sebastian’s grinning, idiot face super-imposed upon it, and instead of the usual toothy, woolly, cud-chewing features of any self respecting cartoon alpaca, this animal is actually some sort of alpaca-Paige hybrid, and she looks less than happy about it.

This isn’t the first time I’ve seen this card. It first made its appearance back in March, two days before Paige’s thirty-eighth birthday, and more importantly, on the one year anniversary of the night that we first met. Paige insisted the timing was coincidental – the last working day before her birthday – but my paranoia was having none of it. For several months I’d managed to keep my insecurities in check, but the arrival of that card tore open the titanium reinforced gates that were keeping my demons from running amok, and what should have been a weekend of romantic celebration turned into forty-eight hours of bickering and sniping and cross examination, during which I may have accidentally accused my girlfriend of harbouring secret affections for her ex. Eventually Paige made a huge show of removing the card from the mantelshelf, and banishing it from our lives.

I thought it had been thrown away.

I disliked him from the moment I laid eyes on him.

Peter Jones started professional life as a particularly rubbish graphic designer, followed by a stint as a mediocre petrol pump attendant. After that he got embroiled in the murky world of credit card banking. Fun times.

Nowadays, Peter spends his days writing, or talking about writing. He’s written three novels; a Rom-Com (Romantic Comedy), A Crim-Com (Crime Comedy), and a Rom-Com-Ding-Dong (a sort-of Romantic-ish Comedy, with attitude). He’s currently working on his fourth novel, which – if it’s a musical – he’ll no doubt describe as a Rom-Com-Sing-Song. (Spoiler: It isn’t).

He is also the author of three and a half popular self-help books on the subjects of happiness, staying slim and dating. If you’re overweight, lonely, or unhappy – he’s your guy.