Oddly enough I have read the two subsequent books in this series 37 Hours and 88° North and loved them. I knew I would want to read the first book, but you know what crippling TBR’s are like so when the chance came up to read the first book 66 Metres as part of a blog tour (where I would just have to read it before all the other books I need to read) I was all in! 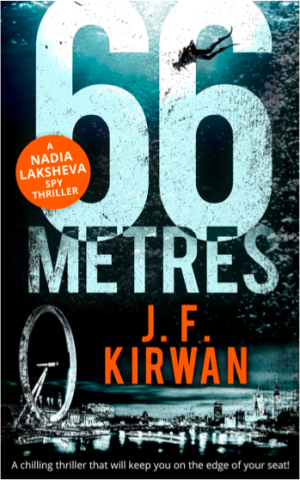 The only thing worth killing for is family.

Everyone said she had her father’s eyes. A killer’s eyes. Nadia knew that on the bitterly cold streets of Moscow, she could never escape her past – but in just a few days, she would finally be free.

Bound to work for Kadinsky for five years, she has one last mission to complete. Yet when she is instructed to capture The Rose, a military weapon shrouded in secrecy, Nadia finds herself trapped in a deadly game of global espionage.

I am so glad I circled back and read this book! Whilst I understood everything that happened in subsequent books reading this just slotted some pieces together for me in terms of relationships and motivations.

I feel like I got to know Nadia really well by reading this book and finding out about more about her background and how she got mixed up with Kadinsky. Her relationship with her sister was lovely to see, they are both in a bad position but are always trying to protect one another.

It was also brilliant to see how Nadia and Jake’s relationship started out and that even though they were on different sides that they could recognise the connection between them.

I was kind of surprised to have a bit of a soft spot for a character who seemed to hover on the line between sides, Lazarus. His reserved power and his vulnerability made him fascinating to read about, he might not have always followed the law but his own morals made you respect him.

As ever with a book by Mr Kirwan the suspense and the action were top notch, the story is cleverly plotted and you find yourself immersed immediately into what’s going on.

I really can’t say much more except that this is a brilliant start to an amazing series and you are missing out if you don’t pick up this book! 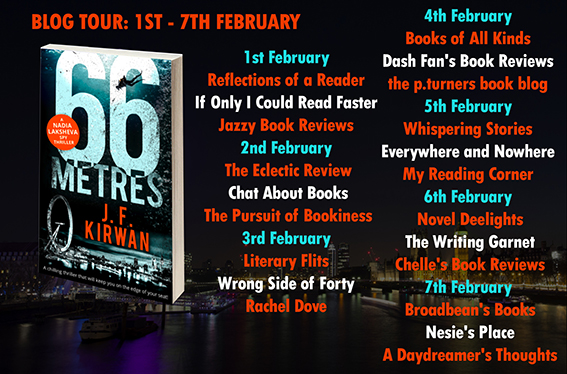 J.F. Kirwan is the author of the Nadia Laksheva thriller series for HarperCollins. Having worked in accident investigation and prevention in nuclear, offshore oil and gas and aviation sectors, he uses his experience of how accidents initially build slowly, then race towards a climax, to plot his novels. An instructor in both scuba diving and martial arts, he travels extensively all over the world, and loves to set his novels in exotic locations. He is also an insomniac who writes in the dead of night. His favourite authors include Lee Child, David Baldacci and Andy McNab.

Reviews for other J.F Kirwan books