Today is my stop on the Tainted Rose tour book two in the Starlight Gods series, today I’m bringing you my thoughts as well a giveaway, first up here is what the book is about. 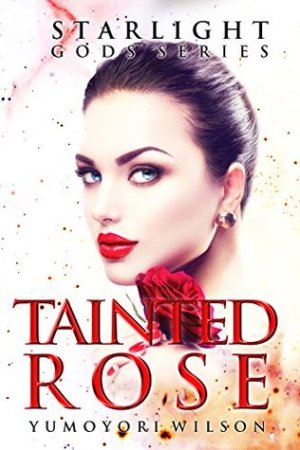 I was destined to do great things, to walk alongside my fellow star knights, as we desperately searched for the woman who would lead our galaxy to salvation.

My spirit and I had failed her once, unable to prevent the chain of events and challenges she’d faced for sixteen cycles. Then, we finally found her – alive.

Within two rotations, she’d blossomed into a beautiful rose – such delicate petals, filled with purity and life. My mission was to guide her home, to where she truly belonged, as our Princess and saviour from the approaching darkness. She was more than just our Princess; I loved her with all my heart.

But…I failed. My once perfect rose, damaged by my failures. Would she ever forgive me, her star knight who’d sworn to protect her? Will I ever get the chance to tell her how much she means to me…to us?

Only the Starlight gods can tell. Please…bring my Firefly home.

I had very mixed feelings about the first book in this series, Dark Wish, I felt like it had a lot of potential but just let itself down with silly inconsistencies and childish characters. I had hopes that maybe Tainted Rose was going to have ironed some of these things out but I found it to be on the same level as the first book.

I’ll admit I found Makoto a little more endearing in this book, but then since they weren’t in the school at all there was no reason for her to be needlessly catty, there was one incident towards the end of the book involving a rival girl that verged on being too much but it didn’t last long.

We get introduced to another Star Knight in this book and thankfully get a bit more background on the rest of the guys and their spirits which I appreciated. We also get to read from their points of view which adds something a little different to this story because we can hear about some of the worlds in a more natural way.

Again there was a very interesting concept around Makoto’s spirits and it was good to see what happened after the end of book one, however, there wasn’t really any plot to speak of in this book, there was nothing to really catch your attention to keep the pace going and at places it kind of lagged.

Unfortunately very similar to the layout of the first book at the very end there is something that happens that is supposed to start off some action and really get to your emotions but I found that by this point I just wasn’t invested enough to get there and ended up skipping through it a little.

It was nice to see some of the relationships develop in this book but it was filled with lots of inconsistencies and errors, such as not knowing what an iPhone is but without being told knowing that you can text with it, it’s little things here and there but they do add up.

It was nice to give this series another shot because I did like the premise but whilst I would love to know the outcome of certain things and would like to see a little more action between Makoto and the Knights I don’t think I’ll be picking up any future books. I think there will be people out there that will enjoy this but I need a something a little more throughout the story to keep me hooked.

Yumoyori Wilson is from Toronto, Ontario. She loves to sleep and write her days away. She works at night as a registered nurse. She has a little addiction to bubble tea and coffee but loves to workout. She has big plans for the writing world and can’t wait to share them with everyone.

Reviews of other books by Yumoyori Wilson