As part of the blog tour for Ouroboros I have a bookish guest post and there is a giveaway with lots of interesting prizes, first though here is what it is about. 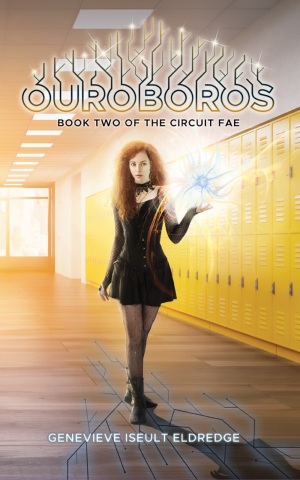 All introverted geek girl Syl Skye wants is to get close to her girlfriend. But when you can kill with a simple touch, a normal date night’s not really in the cards. As it happens, Syl is also a sleeper-princess of the fair Fae. Last year after a freak accident, her power Awakened, granting her white flame to purify the darkness.

Rouen Rivoche is that darkness—a dark Fae princess whose power to bewitch mortals is as terrifying as the violet lightning she controls. Rouen is Syl’s total opposite. Her mortal enemy.

And even though they joined forces to defeat the evil Circuit Fae who harnessed the killing magic in technology to take over the school…that was so last year.

Now, Syl’s touch could mean Rouen’s death. Her increasing power is spiraling out of control, threatening to burn down everything she and Rouen have built together.

Their lives, their love, their very world..

The Language Of The Night by Ursula K. Le Guin

The Prydain Series by Lloyd Alexander

The Silmarillion by J.R.R Tolkien

Daughter Of Smoke And Bone by Laini Taylor

Six Of Crows by Leigh Bardugo

An Ember In The Ashes by Sabaa Tahir

The Abyss Surrounds Us by Emily Skrutskie

Of Fire And Stars by Audrey Coulthurst

Well there are a few of those that I’ll be adding to my list that’s for sure.

Raised by witches and dragons in the northern wilds, GIE writes angsty urban fantasy YA romance–where girls who are mortal enemies kick butt, take names, and fall in love against all odds.

She enjoys long hikes in the woods (where better to find the fair folk?), believing in fairies (in fact, she’s clapping right now), dancing with dark elves (always wear your best shoes), being a self-rescuing princess (hello, black belt!), and writing diverse books about teenage girls finding love, romance, and their own inner power.

She might be planning high tea at the Fae Court right now.

GIE is multi-published, and in her role as an editor has helped hundreds of authors make their dream of being published a reality.