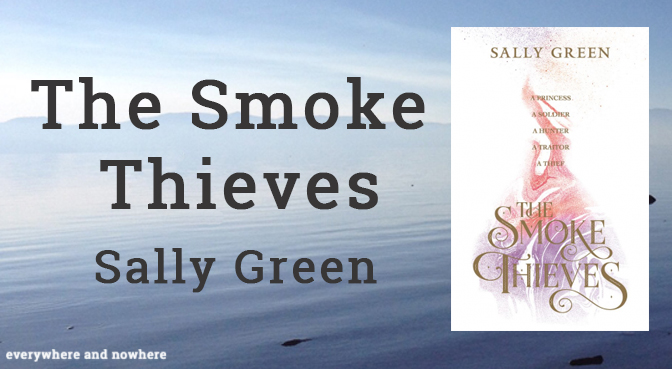 A princess, a traitor, a hunter and a thief. Four teenagers with the fate of the world in their hands. Four nations destined for conflict.

In Brigant, Princess Catherine prepares for a loveless political marriage arranged by her brutal and ambitious father. In Calidor, downtrodden servant March seeks revenge on the prince who betrayed his people. In Pitoria, feckless Edyon steals cheap baubles for cheaper thrills as he drifts from town to town. And in the barren northern territories, thirteen-year-old Tash is running for her life as she plays bait for the gruff demon hunter Gravell.

As alliances shift and shatter, and old certainties are overturned, our four heroes find their past lives transformed and their futures inextricably linked by the unpredictable tides of magic and war. Who will rise and who will fall? And who will claim the ultimate prize?

I was so looking forward to reading this book, I love fantasy books but I was also intrigued as to how each of the characters would be brought together and for what cause. I’m happy to say that I loved it.

The story is told through five points of view we have Catherine the Princess being forced into a political marriage by her father and brother, Tash a young demon hunter, March a servant who decides to seek justice for his people, Edyon a thief who finds himself at the centre of something he would never have imagined and Ambrose one of Catherine’s guards who wants to protect her at any cost.

I have to say out of all of these I found Catherine and Tash’s chapters the most interesting. I loved how fiery Catherine could be and how even though she was so restricted that she was still defiant in small ways and often managed to outwit those that thought of her as a lesser person. I liked Tash for her rebellious nature and her spirit, I loved the banter between her and Gravell and that you could tell they had each other’s backs.

I felt like March and Edyon’s part in the story wasn’t quite as strong as the rest, since this book is the start of a series I know that they will probably become more central to the story but I didn’t feel as gripped through their storylines. I did enjoy witnessing the burgeoning relationship between them but felt like this was the only thing I was really interested in rather than the roles they were playing in the unfolding narrative.

The flirtation between Ambrose and Catherine was something that I was definitely hoping would develop. I loved Ambrose’s sense of honour and that he tries to protect the Princess no matter what the cost, but I admit that I was exceptionally intrigued by Catherine’s betrothed Prince Tzsayn and I am certainly looking forward to seeing more of him. I have to say the one thing I did admire about this book was that there was no outrageous falling head over heels for someone with one glance, there were the glimmers of forming relationships but this wasn’t the main concern for the characters involved.

The pace of the story was almost perfect, I liked that we got time to get to know that characters in the beginning and then as the storylines converge the pace starts to pick up as the action starts to set in. It only lagged a little for me around the middle when we were hearing more from March and Edyon but luckily not for too long and not in a way that really affected my reading experience.

I really enjoyed all the different aspects of this book, the characters, the demons and their smoke, the different nations and their customs, the politics and the treachery, it really had everything I was after. Including an ending that has me desperate to get my hands on the next book.