I’m delighted to be bringing you an inspirational guest post, my review and a giveaway on the blog tour for The Development, don’t say I’m not good to you, first though here is what the book is about. 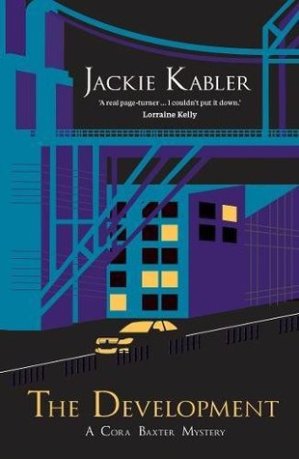 After a stressful week, TV reporter Cora Baxter is ready for a quiet weekend. But what she hadn’t counted on was witnessing the shocking death of a young woman on her way home. She discovers seventeen-year-old Leanne had been protesting against a new housing development, angering the powerful establishment. Leanne’s death is ruled a suicide, but when puzzling information comes to light, Cora decides to investigate further.

She doesn’t know what an unscrupulous businessman, a suspended police officer and hate-mail sending neighbours have to do with the case – but she knows there is a news story there.

With her eccentric camera crew on hand to help, can Cora tie the strands of Leanne’s case together – or will other forces interfere?

The Development, my new novel, is the third in my Cora Baxter series of murder mystery novels set in the world of television. Just seeing that written down astounds me – how on earth have I managed to write three novels? Three whole books? And yet I can see them sitting here on the desk in front of me, with their lovely covers and my name right there, in big letters, on the front. It’s something I never dreamed would happen and sometimes I have to pinch myself. I’m a published author! I’ve written BOOKS!

The funniest thing about all of it is that I only ever intended to write one book, when I started. My first novel, The Dead Dog Day, was written as a standalone story, and all I wanted was to get that book published. I had given no thought whatsoever to any future writing. Then, my wonderful publisher Accent Press threw a rather large spanner in the works. “We’d like to offer you a three-book deal,” they said. “We can see this as a series of novels, featuring Cora Baxter and her friends. OK?”

OK? I panicked. I had zero ideas for any future storylines. It had been hard enough to write one book – how on earth could I write three? And then maybe more after that? Then I calmed down. I’ve always been one to say yes to opportunities in life, even if they seem far too challenging. You say yes, and worry about it later, right? So I did. I said yes, agreeing to write a book a year over the following three years. I said yes, despite having a demanding full-time job and no clue what I would write in those books. And you know what? It was absolutely fine. The ideas came, and the writing flowed, and now, three years down the line, the third novel has been written. Not only that, but I’m already working on a fourth book, with rough plots for several more stashed away in my ideas file.

I’m a big fan of inspirational quotes, and a couple come to mind here. Jump, and the net will appear, for example. It was a huge leap of faith for me to sign a three-book publishing deal, but how could I let that chance pass me by? I jumped, and thankfully that net did appear, and I didn’t drown. And how about “it’s a beautiful thing when a career and a passion come together”? I still have my full-time TV job, but writing is now a second career and a huge passion. I can’t imagine ever giving it up – after all, hopefully this is something I’ll be able to do for many years to come. Life is short, and I really do believe we should grab every opportunity with both hands, whether it might be a chance to travel, to try something we have never tried before, or to do something we never thought we could do, even if it terrifies us. As that famous sports brand says – just do it. I just did it, and I’ve never regretted it.

After reading book two in the series, The Deadline, last year I was really looking forward to catching up with Cora and seeing what mischief she was going to get herself into.

Luckily I wasn’t disappointed, The Development was every bit as fun and thrilling as I expected from this series.

This book dives pretty much straight into the action, immediately giving the reader lots of questions that you can’t wait to be answered. I liked that this investigation had a lot of different angles and that it wasn’t obvious how they were all going to fit together, it really kept me guessing until the end.

Cora and her friends were every bit as wonderful, their banter was brilliant it provided some humour and was a nice balance to the more serious aspects of the book. I liked that her friends knew that she wasn’t going to let it go and supported Cora in trying to get to the truth.

What was interesting about this book was that we also got snippets from some of the other characters, ones that were involved in the investigation in some way or another. This definitely gave it that extra mysterious quality as you started to wonder at their motivations and who was involved and how far they would go to cover it up.

Strangely enough, I kind of enjoyed the fact that Cora struggled with this investigation and was ready to admit defeat. It definitely kept me on my toes wondering how she was going to carry on or whether she would figure out what exactly happened.

The Development is a very engrossing read, with plenty of suspenseful moments but some light-hearted humour too. I enjoyed dropping back in on Cora and her crew and I’m hoping that I’ll get to see some more of her.

Well if you like the sound of this book or the series in general then you are in luck because the giveaway, which is open internationally, is to win…

what a great prize!!

Jackie Kabler is a journalist, TV presenter and author. She spent twenty years as a TV news reporter for GMTV, ITV and BBC news, and now works as a presenter for shopping channel QVC and is author of the Cora Baxter Mysteries, a series of  murder mysteries set in a television newsroom. The Development is her third novel. Jackie lives in Gloucestershire with her husband, who is a GP.

Reviews of other Jackie Kabler books