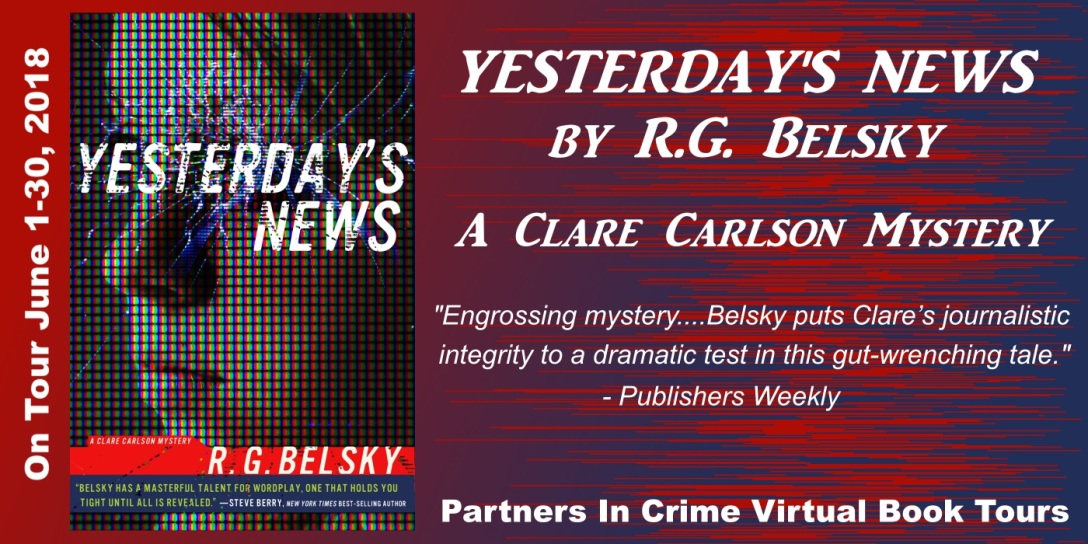 I’m starting off the week on the blog tour for Yesterday’s News, I have an extract from the book and I’ll be letting you in on my thoughts before that here is what the book is about.

When eleven-year-old Lucy Devlin disappeared on her way to school more than a decade ago, it became one of the most famous missing child cases in history.

The story turned reporter Clare Carlson into a media superstar overnight. Clare broke exclusive after exclusive. She had unprecedented access to the Devlin family as she wrote about the heartbreaking search for their young daughter. She later won a Pulitzer Prize for her extraordinary coverage of the case.

Now Clare once again plunges back into this sensational story. With new evidence, new victims and new suspects – too many suspects. Everyone from members of a motorcycle gang to a prominent politician running for a US Senate seat seem to have secrets they’re hiding about what might have happened to Lucy Devlin. But Clare has her own secrets too. And, in order to untangle the truth about Lucy Devlin, she must finally confront her own tortuous past.

School was always special to her.

Some children hated to go to school. But she always looked forward to going back to school each morning. She loved her friends. She loved her teachers. And most of all, she loved to learn.

For her, it was a time of excitement, a time of adventure, a time of new beginnings each day she sat in the classroom—like a butterfly emerging from a cocoon in a field of flowers underneath a blue, cloudless sky.

And so, on this sunny morning, like so many others, the mother and daughter leave their house and walk together toward the school bus that will pick up the little girl.

“What about your lunch?” the mother asks.

“Do you have enough money?”

“Right,” she says. The mother knows that, but she’s forgotten. “And remember to come home right after school.”

“You worry too much, Mom. I’m not a baby anymore.” That’s all too true, of course. She is growing up. Just like they all do.

But today she is still her little girl.

The mother hugs her and puts her on the school bus, watching her in the window until the bus disappears from sight.

A little girl who has everything in the world ahead of her. A lifetime of memories to come. And all the time in the world to enjoy it.

THE RULES ACCORDING TO CLARE

I always tell the same story to the new reporters on their first day.

It goes like this: Two guys are sitting in a bar bragging about their sexual exploits. As they get drunker and drunker, the conversation becomes more outrageous about how far they’d be willing to go. Would you ever have sex with an animal, one of them asks? Of course not, the other guy replies angrily. What if someone paid you $50 to do it with a dog? That’s ridiculous, he says. How about $500? Same answer. Okay, the first guy says to him, would you have sex with a dog for $5,000? The other guy thinks about that for a while, then asks: “What breed?”

The point here is that once you ask the question “what breed?” you’ve already crossed over a very important line and can never go back.

It’s based, I suppose, on the famous old Winston Churchill story. They say Churchill was seated at a dinner party next to a very elegant and beautiful lady. During the meal, he turned to her and asked if she’d be willing to have sex with him if he gave her $1,000,000. The woman laughed and said sure. Then he asked if she’d have sex with him for $25. “Of course not, what do you think I am?” the indignant woman replied. To which Churchill told her, “Madame, we’ve already established what you are. Now we’re just haggling over the price.”

This is a crucial concept in the news business where I work. Because there is no gray area for a journalist when it comes to honesty and integrity and moral standards. You can’t be just a little bit immoral or a little bit dishonest or a little bit corrupt. There is no compromise possible here.

Sometimes I tell a variation of the dog story. I call it the Woodstein Maneuver. The idea is to come up with a new scenario for the Watergate scandal. To speculate on what might have happened if Bob Woodward and Carl Bernstein (“Woodstein!” in the Robert Redford–Dustin Hoffman movie) had not written their stories that led to Richard Nixon’s ouster, but instead gotten hush money to cover up the scandal. What if Nixon had paid them to make it all go away?

I ask a new reporter to put themselves in Woodward and Bernstein’s place and think about what they would do if offered such a bribe.

Most of them immediately say they would never take money under any circumstances to compromise a story. I’m not sure if they say it because they really mean it or simply because they believe it’s the answer I want to hear. A few laughingly say they’d go for the money, but I’m not sure I believe them either. I figure they’re just trying to be outrageous or different. Only a few reporters ask the key question. The “what breed?” question. “How much money?” they want to know. Those are the ones I worry about the most.

This is a story that jumps right into the action, the pace is just fantastic. Before I picked this book up I wasn’t sure if I was in the right mood to read it and worried it would be a bit of a slog to get through but straight away I was gripped.

I really love cold case stories because you know that even with new evidence it’s going to take a lot of determination to get to any kind of answer. Our main character Clare certainly has plenty of that, she’s a tough and driven woman who doesn’t mind confronting people to get a story. I thought when first reading about Clare that I wouldn’t like her but she grew on me, she has a lot of flaws but she has an infectious attitude that I couldn’t help but warm to.

The story, for the first part of the book, was fantastic. We are introduced to all the main players and I was totally invested in trying to figure out what the new evidence meant in the case and how each person was involved. It was also really interesting reading about the difference between newspaper and television journalism and getting what felt like a behind the scenes look into what happens on a day to day and how ridiculous it can all be.

Unfortunately, this was let down a little bit by the second part of the story. This is going to be quite hard to explain fully so that I don’t spoil anything for other readers but I felt like there needed to be more set up earlier in the story for the conclusion to be a bit more believable. Everything was addressed by the end but I did feel a little bit cheated that there wasn’t even a hint of it until you were reading the motivations, it just hampered the story for me slightly.

Having said that, Yesterday’s News is a really good book with clear writing that drew me in from the start. I had never heard of the author before but I will definitely be looking out for more books.

R.G. Belsky is an author of crime fiction and a journalist in New York City. Belsky’s crime novels reflect his extensive media background as a top editor at the New York Post, New York Daily News, Star magazine and NBC News. His previous novels include the award-winning Gil Malloy mystery series. YESTERDAY’S NEWS is the first in a new series featuring Clare Carlson, the hard-driving and tenacious news director of an NYC TV station.