Hope you are all enjoying your week so far, I’m swinging by with a Guest Post from the author Jenny Morton Potts and a giveaway as well before we get to that here is what her book Just is about.

How far would you go to save a life?

On golden Mediterranean sands, maverick doctor Scott Langbrook falls recklessly in love with his team leader, Fiyori Maziq. If only that was the extent of his falling, but Scott descends into the hellish clutches of someone much more sinister.

‘Just’ is a story of love and loss, of terror and triumph. Set in idyllic Cambridge and on the shores of the Med and Cornwall, our characters fight for their very lives on land and at sea.

An unforgettable novel which goes to the heart of our catastrophic times, and seeks salvation.

A Cabin of One’s Own…

When we moved to Thaxted in Essex, it was a bit too expensive and there was certainly no room spare for a study. (In fact, we had to take in a lodger in the spare room, to pay the stamp duty!) But there was a decent sized garden, so we ordered a cabin online, from Latvia. I think it was about £3,000. This is her: 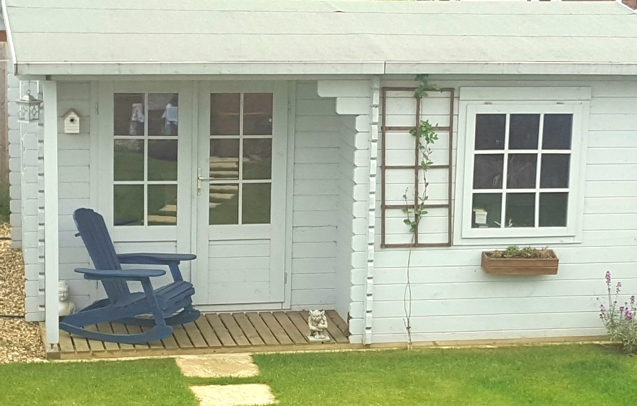 So the log cabin is where I work, in a wingback chair. I have things around me, like books, postcards, photos and a window to the garden but I never get distracted. Once I am in author mode, I’m away. I could work anywhere, mind you, and often do. On Saturdays, once I’ve tired the dog out walking, I work in the car whilst awaiting my son who studies art in Cambridge (just at someone’s house, not the hallowed University). Talking of Flint, he shares the cabin. He draws and paints in there and has his PC. When he is creating, he plays mystical music or dramatic Old Spicetunes. I, on the other hand, require silence. I can’t work when he’s there but fortunately, he goes to school. His side of the cabin is a mess. Paint everywhere. My side is super neat. We are not alike. But we do like each other.

It’s great to have your own lair; to know as you wend your way across the path on the lawn that you are going to your spot, your cockpit, your realm, yourself.

“So long as you write what you wish to write, that is all that matters; and whether it matters for ages or only for hours, nobody can say.”Woolf

Oh Virginia, if only, if only…

Sometimes, we have drinks with friends in the cabin. It’s very cute with candles and crystal glinting. I try to bags my own chair, of course. Fair’s fair, I have a bad back. And sometimes we sleep in there if the house gets full. It’s very cosy with loads of cushions and blankets. There’s electricity and internet. The only problem is that there’s no catflap and once the kitties know we’re in there, they want to come in, then out, then in again. In the summer, we just leave the door open to eliminate miaowing through the night.

“Literature is strewn with the wreckage of those who have minded beyond reason the opinion of others.”Woolf

Oh Great One, but we are mere mortals.

Virginia Woolf’s essay, A Room of One’s Own, is probably my all time favourite piece of writing. The story of Judith Shakespeare (a fictional sister to William) took my breath away, as a girl. Judith was born with equal talent to her brother but was given no education, no opportunity, and no room. Her brother went on to become the world’s most celebrated writer, while Judith killed herself.

“Intellectual freedom depends upon material things. (…) Women have had less intellectual freedom than the sons of Athenian slaves. Women, then, have not had a dog’s chance of writing poetry. That is why I have laid so much stress on money and a room of one’s own”Woolf

I suppose then that it is not quite my own, my ‘room’, except for that corner. A Corner of my Own in a Cabin would be more accurate. But I know that I am lucky to have room, to write.

one of five eBook copies of Just

Jenny is a novelist, screenplay writer, and playwright. After a series of ‘proper jobs’, she realized she was living someone else’s life and escaped to Gascony to make gîtes. Knee deep in cement and pregnant, Jenny was happy. Then autism and a distracted spine surgeon wiped out the order. Returned to wonderful England, to write her socks off.

Jenny would like to see the Northern Lights but worries that’s the best bit and should be saved till last. Very happily, and gratefully, settled with the family. She tries not to take herself too seriously.