A new month, the start of a new week and today I am bringing you an extract from the Pulse omnibus it sounds deliciously intense, here’s what it’s about. 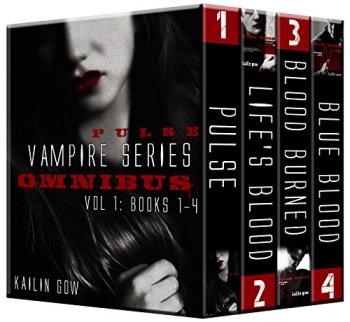 17 year-old Kalina didn’t know her boyfriend was a vampire until the night he died of a freak accident. She didn t know he came from a long line of vampires until the night she was visited by his half-brothers Jaegar and Stuart Greystone. There were a lot of secrets her boyfriend didn t tell her. Now she must discover them in order to keep alive. But having two half-brothers vampires around had just gotten interesting….

She ran like an animal. Her clothes were wet, sopping, clinging to her thighs and to her chest, hollow and transparent around the curve of her shoulders. Her hair shook out droplets of rain; her cheeks were flushed and she was breathless. He could see her heartbeat throbbing at the side of her throat, see it in the rhythmic panting, hear it from across the street, pounding in his ears, intermingled with the thunder bolting from the sky. He could feel it – it felt like an earthquake to him, shaking his ribs, his shoulders, his legs. It had been so long since he had seen a heartbeat like hers – since he had felt a heartbeat at all.

The skies had opened up – as they so often did in North California – without any warning, without any hesitation. It was as if the smooth blue glass ceiling of the world had shattered all at once, letting the primordial oceans pound down upon the pavement. He could see her consternation, her irritation – she wanted nothing but to get out of the rain, to dry herself off, to curl up into something warm and dry.

But Jaegar loved the rain. He loved the energy – the pulse of life beating down upon the earth. He could hear the scattered raindrops in their rhythmic approach to earth and pretend that each fall of rain was a beat of his dead heart. And she was alive with the energy, too – alive as he had never seen a woman alive, tossing her hair back, running into shelter, and her lips were pink and her cheeks were red. He remembered that his lips would never again be pink, that his cheeks would never again be red.

She was so young.

Humans so often surprised him in that way. They looked no different from him – he could have been seventeen; he had been seventeen for so long – but their youth never failed to surprise him. The way the world was so new to them – that rain could still take them by surprise, when he had seen so many rainfalls.

He could smell her. The wind carried her scent to him like an animal’s scent, and it was all he could do to keep his fangs in check. He leaned heavily upon the branch and parted the leaves to get a better look at her. He could feel the blood – stagnant in his veins – begin something like a torpid, sluggish, shift towards life – the closest thing he would ever get to a heartbeat. She was the sort of girl who made young boys’ hearts pound, he thought – and they never knew how lucky they were to experience that sensation.

For it was the physical aspect of it, he thought, that humans understood least of all. They romanticized vampires, of course – how terrible it would be to live at night! To drink blood! To prey upon humans! These were things they could intellectualize, understand. Humans had been forced to commit murder. Humans had been forced to bite back their most natural, primal desires – and so they could almost understand, when they imagined vampires, what it was like to feel that insatiable hunger for a woman’s throat, her breast, her wrist. But not a human in the world had ever been alive without living, without a heartbeat – and so they took it for granted – what it meant, that constant linear throbbing, clock-like, towards inevitable death. For Jaegar was a vampire, and he was not alive, and the dull ache in his chest where a heartbeat should have been was for him one of the most agonizing things in the world.

He had been told that she was the one. He had waited for her until sunset – the sun agonizing upon him, even with the ring around his finger. Vampires were not meant for light, and even the strongest magic could not take away the pain, searing, burning, aching, in his flesh. He was unnatural in sunlight, and only now that dusk was beginning to settle over him could he find relief. He sat perched in the tree, obscured by the leaves, staring at her as she ran down the street.

He leaned in too closely – the birds noticed at last that something was wrong in their midst and took flight; a flurry of wings beat up around him and the branch snapped from the tree and plummeted to the earth below.

It was enough time to make a distraction.

He concentrated, and in half a second he was behind her, so close he could feel the wind blow her hair upon his lips, and then he opened the umbrella above her.

“What the…” She rounded on him.

“You looked wet,” he said. She did not seem amused.

He had learned kung fu once, many centuries ago. He thought it better not to mention it.

“Thanks,” she said, lamely. “I’m sorry – I didn’t mean to snap at you. But you need to learn not to sneak up on people like that. You scared me.”

Her eyes remained fixed upon the tree from which he had come. A suspicious glare clouded her gaze. Had she seen – was she wondering? He knew she knew something was wrong. He tried to maintain whatever pleasant normalcy he could. The sequoias were tall, after all. No human could survive a jump from them – he knew she knew this. He knew she thought he was human.

Her eyes grew wide and he could see them grow hot and fevered with desire.

Not again, Jaegar. He had promised himself never to use his influence on mortals again. It was dishonorable, Aaron had said – but what could be dishonorable for a vampire? Their rules were of conquest, of power; he could not remember a century when human rules had governed him.

“Take this,” he said, trying to pretend to himself that it was not the magic, trying to pretend perhaps it was only his beauty – he was beautiful, after all, – but he could not control it, any more than she could control it; his hypnosis reflected back at him from the depths of her eyes.

He handed her his umbrella; she clasped her fingers around it.

“Thank you,” she whispered. It was the dull voice of possession.

Damn it, Jaegar, not again!

This had never happened to him before. Whenever he had hypnotized a human female, it had been intentional. In the days before Aaron he had felt no regret – he had plucked out the most beautiful maidens in every century and thus made them succumb to him. But this was different. He had never meant to do it. Something about this human female affected him and chipped away his resolve like no other before.  He had promised never to do it…

He was under his own spell.

He felt his arms gather around her neck, his lips come closer to her mouth, until at last he could breathe in the air from her mouth, and taste the life moist on her lips, and smell her intoxicating hint of perfume. He could feel her heartbeat against her chest, the constant rhythm as steady as the rain.

And then the spell was broken. She recoiled – she could feel the deathly cold of his lips, the chill on his cheek – she was still dulled in her confusion, but it was enough for him to regain control of his powers – to run, to hide his shame…

What a humiliation! For a vampire not to control his powers! He had gone soft, he reasoned, ever since he’d listened to Aaron’s stupid admonitions. He was letting his vampire nature get the better of him.

Well, enough of that, he thought. Stuart was the soft one – Jaegar was not. And Jaegar had no patience for these kinds of games. Kalina was the key, after all. Next time he saw her, he’d be prepared. He’d have control over his powers. He’d be waiting. And he’d show her no mercy…

Well he sounds like a devastatingly handsome and wonderfully dangerous vampire, if you like the sound of the book then you will love the giveaway, click the link below to win…

more than enough to buy the book and some other treats too.

Kailin Gow loves things that are edgy, cool, bright, exciting, hopeful, glittery, and jaw-droppingly awe-inspiring.  She loves writing, reading, and filming stories about people whose journeys take them beyond their boundaries – physically, psychologically, intellectually, and emotionally to arrive a point and a place of inspiration and hope.  Her works have been recognized by the leaders in the industry in book publishing and entertainment to be “innovative” and “disruptive”, earning her awards from ALA, The IBPA, and festivals.