I have a book a little different to what I’ve been reading lately to tell you about today before I let you in on my thoughts here is what Dortmund Hibernate is about. 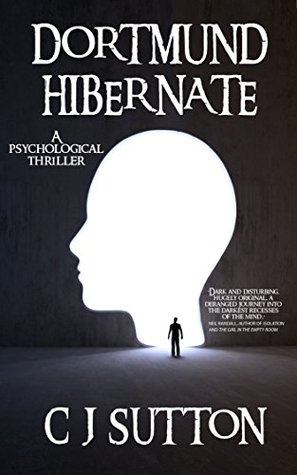 Psychologist Dr Magnus Paul is tasked with the patients of Dortmund Asylum – nine criminally insane souls hidden from the world due to the extremity of their acts.

Magnus has six weeks to prove them sane for transfer to a maximum-security prison, or label them as incurable and recommend a death sentence under a new government act.

As Magnus delves into the darkness of the incarcerated minds, his own sanity is challenged. Secrets squeeze through the cracks of the asylum, blurring the line between reality and nightmare, urging Magnus towards a new life of crime…

The rural western town of Dortmund and its inhabitants are the backdrop to the mayhem on the hill.

It’s Silence of the Lambs meets Shutter Island in this tale of loss, fear and diminishing hope.

I’ll start by saying that I wasn’t sure if I would be able to read this book, one of the first chapters almost put me off, it was a bit gruesome and I’m not really one for gruesome books but I decided to give it the benefit of the doubt and I’m really glad I did.

Dortmund Hibernate is definitely a slow burn type book, nothing happens at a fast pace but it actually benefits from that. I could read one or two chapters and then be thinking about them for a while afterwards, it is quite dense there is a lot to get through but I don’t mean that in a negative way, it really got me involved with the story.

The characters were all in some way dark and twisted, I don’t just mean the inmates, to be a guard at a place like that you are definitely no angel. Each of the nine was there for very different reasons and it was good that there was a clear divide between them, they have all done heinous things but they could be distinguished from each other and there was hatred amongst them for various reasons.

Magnus was an interesting one, at times he felt like the voice of reason and then I would start to wonder if he had other motives or if the asylum was rubbing off on him. For me, he always had a question mark next to him but it made the story more interesting for it and I liked that he wasn’t clearly defined as a good guy.

The story was clever, I will not say anything about it but it was very well crafted. Whenever I read psychological thrillers I am always expecting a twist but what I liked about this book was that there were a few and I didn’t expect them, I knew there was going to be some but I couldn’t guess what they would be.

Towards the end of the book it did become rather gruesome again by this point I was too invested in it to stop reading but if like me you aren’t that fond of gore then I’m happy to say you can skim around it without losing any of the story.

Even though it had a little more gore than I would usually like I’m glad that I gave it a shot, it is a very clever book that really does play on your mind after reading. I would be interested to see what C.J. Sutton comes up with next.

C.J. Sutton is a writer based in Melbourne, Australia. He holds a Master of Communication with majors in journalism and creative writing, and supports the value of study through correspondence. His fictional writing delves into the unpredictability of the human mind and the fears that drive us.

As a professional writer C.J. Sutton has worked within the hustle and bustle of newsrooms, the competitive offices of advertising and the trenches of marketing. But his interest in creating new characters and worlds has seen a move into fiction, which has always pleaded for complete attention. Dortmund Hibernate is his debut novel.