Today I am welcoming in Sunday with a review of The Cheesemaker’s House and for any of you in the UK I am running a giveaway for you to win a paperback copy.

When Alice Hart’s husband runs off with his secretary, she runs off with his dog to lick her wounds in a North Yorkshire village. Battling with loneliness but trying to make the best of her new start, she soon meets her neighbours, including the drop-dead gorgeous builder Richard Wainwright and the kindly yet reticent café owner, Owen Maltby.

As Alice employs Richard to start renovating the barn next to her house, all is not what it seems. Why does she start seeing Owen when he clearly isn’t there? Where – or when – does the strange crying come from? And if Owen is the village charmer, what exactly does that mean?

The Cheesemaker’s House is a gripping read, inspired by a framed will found in the dining room of the author’s dream Yorkshire house. The previous owners explained that the house had been built at the request of the village cheesemaker in 1726 – and that the cheesemaker was a woman. And so the historical aspect of the story was born.

Jane Cable’s novel won the Suspense & Crime category of The Alan Titchmarsh Show’s People’s Novelist competition, reaching the last four out of over a thousand entries. The judges of this competition compared her work to that of Barbara Erskine, but it also resembles the more recent works of Alan Titchmarsh or Kate Mosse.

Well this book wasn’t what I expected but in the best way.

It has an element of mystery the whole way through but in a subtle way that makes you desperate to put the pieces together whilst keeping you totally gripped in the story. It also fascinated me finding out about who had lived there before and why it had had such an effect on Alice.

The chapters are short and snappy which really helps with the pace, it wasn’t the type of book that I felt rushed through but before I knew it I was getting to the end and I’d been reading the day away without noticing.

I’m kind of glad that I totally got the wrong impression of Owen from the blurb, I thought charmer in a very different way, so I’m glad that he was actually this enigmatic but slightly strange guy who seemed different every time Alice met him. I was very intrigued by him and hoped that Alice would get to the bottom of his secrets.

I enjoyed getting to know Alice, she was witty and kind and it was interesting trying to figure out if she was inventing things that weren’t there. It was also nice hearing about the area, there was a lot of rich description that really made the place come alive.

This is a book that you will easily while away the hours with, with a captivating plot and beguling characters. I’m looking forward to my next Jane Cable read. 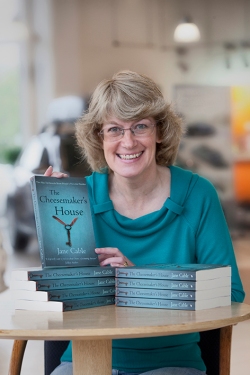 a paperback copy of The Cheesemaker’s House

Although brought up in Cardiff, Jane Cable left Wales to study at the age of eighteen and has lived in England ever since. Her father was Anglo-Welsh poet Mercer Simpson so growing up in a house full of books Jane always read – and wrote. In 2011 she started to take her hobby seriously when The Cheesemaker’s House, which became her debut novel, reached the final of The Alan Titchmarsh Show’s People’s Novelist competition. She writes romance with a twist of mystery which has been published independently and through the UK ebook giant, Endeavour Press. Jane is an active member of the Romantic Novelists’ Association and a director of Chindi Authors.

In 2017 Jane moved to Cornwall and this year will become a full time author. She’s passionate about her new home, cricket, travelling and her husband of 22 years – although not necessarily in that order.