Another week over so fast, can’t believe it! Today I have a guest post  from author K. J. McGillick on her journey to The Last Lie She Told, here is what it is about. 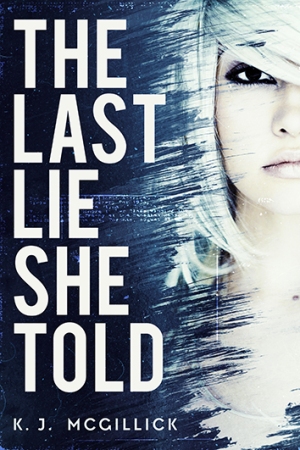 Lies and misdirection rule the game.

Private security expert Lee Stone and NYPD Detective Belle Hughes are assigned to the case. In a race to find Fiona, they track her across four states and shocked to find men from her past are being murdered. With little information and even less evidence, each new crime scene brings more questions than answers.

While secrets are revealed, there is only one conclusion: Fiona controls the game, the players, even the course of the investigation. The danger escalates, and the game must be mastered, or all fall victim to it. As Lee and Belle struggle to put all the pieces together, the two investigators find their relationship heats up as they are drawn to each other. Looking for a murder mystery with a feisty female detective that’s filled with twists and turns? Explore The Last Lie She Told for a thrill ride that leaves you guessing until the end.

The Last Lie She Told is 99p/c for until the 14thAugust.

My first book Three: Deception Love Murder was written with one purpose, a legacy for my grandchildren. I had no intention of making a living as a writer nor to write a book after this one.

The subject I chose was one of my passions in life, art. I first became inextricably linked with art when I was living in New York and attended Nurse Anesthesia school at Columbia University. I had an afternoon free and visited the Metropolitan Museum of Art which was a hop skip and jump from where I finished my day. What I expected I didn’t know, but what I found changed my life. I found Egypt, the Renaissance and the Impressionists and Monet made me fall in love with him. After that day I rushed to Barnes and Nobel and bought every book my budget could afford and learned everything I could about the Impressionists. If only I had You tube like today! Although not a fan of Modern Art I ventured to the Museum of Modern Art but always found my way back to the Met.

Over the years I have been fortunate enough to have visited over a hundred museums worldwide but I always come back to the Louvre and the D’Orsay, homes to my heart. Having first visited these museums in 1997 it lit a fire in me to research every bit of information I could about art and by now the world was open to explore via the internet. And so my journey began, to become an art history expert.

My first book was a blend of my passion for art history and the intrigue of organized crime and how that shapes the art world. The intrigue of the crime captivated me of how money was laundered right under the governments nose and how little was done to stop it. And thus, was born the book that is still my favorite how the art world facilitates crime and is lauded for it. It pleased me the book fulfilled my mission, a legacy for the grandkids and enjoying teaching people about art through fiction. However, I was stunned when the reviews came in that people didn’t understand that was it; the book was finished. They thought there had to more; they needed a conclusion I thought I gave them. And thus, book two was set in motion.

As an attorney I have worked closely with women who have gone through emotional abuse, gas lighting. I have always wanted to give them a voice and now I was able through book two. Book two allowed me to blend my experience and knowledge of emotional abuse and my background in medicine with the main characters who were dealing with organ harvesting eventually leading to the emotional abuse. Again, I thought book two concluded the work but again the reviews felt the story hadn’t concluded so I pressed on.

Book three which is title ONE Rage Vengeance Murder was the most challenging because I steered the book in a direction I knew something about bioterrorism but nothing about economics.  Through intense research I could teach myself how the stock market works and how global economies were meshed. World economic survival depends on a healthy global stock market. ONE was the hardest book to write, but it completed the series and I put the trilogy behind me. Each book stands alone but connected.

My latest book The Last Lie She Told is a series where there are characters they remain throughout from my first books but have a minimal role in the books. It will introduce new protagonists with each book. I enjoy writing series as I find the readers become comfortable with the characters and thus can immerse themselves in the story. I hope my readers enjoy the intrigue of the story and also remained bonded to old friends. 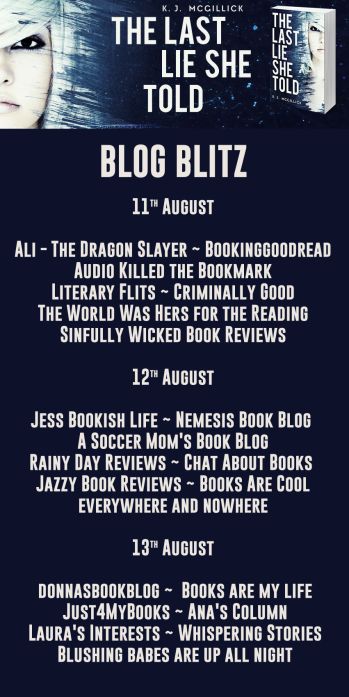 K.J. McGillick was born in New York and once she started to walk she never stopped running. But that’s what New Yorker’s do. Right?

As she evolved so did her career choices. After completing her graduate degree in nursing she spent many years in the university setting sharing the dreams of the enthusiastic nursing students she taught. After twenty rewarding years in the medical field she attended law school and has spent the last twenty-four years as an attorney helping people navigate the turbulent waters of the legal system. Not an easy feat. And now? Now she is sharing the characters she loves with readers hoping they are intrigued by her twisting and turning plots and entertained by her writing.