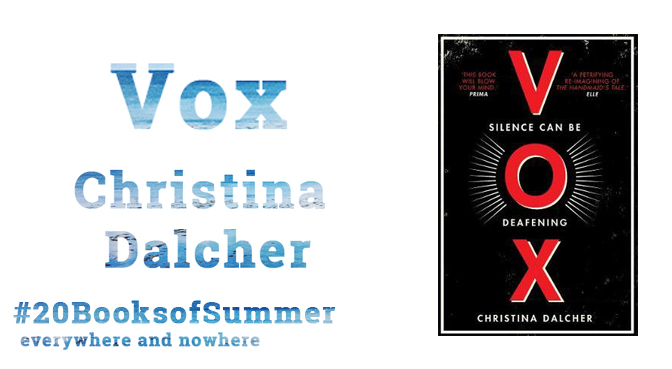 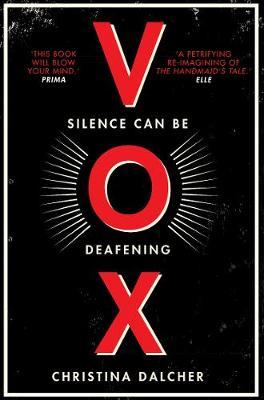 Neurolinguist Dr Jean McClellan has become a woman of few words. One hundred words per day to be exact; any more and a thousand volts of electricity will course through her veins. She is not alone. Now that the new government is in power, no woman is able to speak over this limit without punishment.

Books are forbidden, bank accounts transferred to the closest male relative and all female employment suspended, while young girls are no longer taught to read and write. But when the President’s brother suffers a stroke, Jean is temporarily given back her voice in order to work on the cure. But things are not as they seem and Jean soon discovers that she is part of a much larger plan, to silence voices around the world for good.

The Handmaid’s Tale meets The Power, VOX is book club fiction with huge commercial appeal and a sharp political edge. Poignant and subversive, this is a thrilling feminist dystopia that resonates with the exploding conversations around female equality and the misuse of power.

Wow, I almost don’t know what to say. This is a book that I think will have a lot of people talking with a lot of varying opinions. This will sound like an odd thing to say because I found this book amazing but at the same time, I didn’t really like it.

The concept is phenomenal, in the vein of The Handmaid’s Tale, it is a scary dystopian future where women are only allowed to speak 100 words a day and are only allowed to be homemakers. In a world that does seem as if it is indeed at times going backwards this definitely resonates because it feels as if it wouldn’t take much of a tipping point for something equally as bad to happen in real life.

I was seething at the injustice and the fact that so many people didn’t act, that they were able to brainwash the kids and have everything in place before anyone even noticed what was happening. It is scary to think that such extremists could get into power and cause irreparable damage to a nation.

I was interested in how it got to that point and enjoyed the flow of information as it goes back and forth between Jean’s present experience and how it led there. I also enjoyed as we started to see how people were fighting back, and how Jean copes with suddenly being able to talk and work again, although some of the science went over my head.

The writing was engaging, a bit drawn out in places maybe but the one thing that let it down for me just a little bit was that I didn’t really connect with Jean the way I thought I would, she is probably the most realistic portrayal of how most women would end up but I kept thinking that she would have more fight and that I’d be rooting for her, I think that is totally a personal thing though.

I do think that this is the kind of book that you have to immerse yourself in to find out how you feel about it. I loved it and didn’t want to put it down but I also didn’t like it, just how mad I felt when I was reading and it definitely gave me a lingering sense of foreboding, but I suppose it is all part of the book’s genius.

This was another book that wasn’t on my original list for the challenge but it is a Netgalley book and I really couldn’t wait to read it.