This book is described as Pan’s Labyrinth meets The Hazel Wood, both of which I loved, so of course I knew I had to read this unusual fantasy, here’s my thoughts plus if you live in the US there is a giveaway you’ll be interested in. 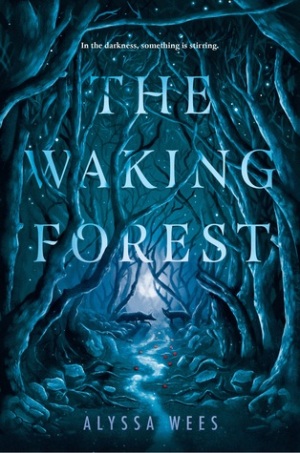 Pan’s Labyrinth meets The Hazel Wood in this novel about a girl with terrifying visions and a wish-granting witch whose lives collide in the most unexpected d of ways.

The waking forest has secrets. To Rhea, it appears like a mirage, dark and dense, at the very edge of her backyard. But when she reaches out to touch it, the forest vanishes. She’s desperate to know more—until she finds a peculiar boy who offers to reveal its secrets. If she plays a game.

To the Witch, the forest is her home, where she sits on her throne of carved bone, waiting for dreaming children to beg her to grant their wishes. One night, a mysterious visitor arrives and asks her what she wishes for, but the Witch sends him away. And then the uninvited guest returns.

The strangers are just the beginning. Something is stirring in the forest, and when Rhea’s and the Witch’s paths collide, a truth more treacherous and deadly than either could ever imagine surfaces. But how much are they willing to risk to survive?

This is a really hard book to review, it is such an unusual and complex tale, I will admit that I am struggling to find the right words.

It is a book of two parts so I feel like to best describe how I feel about it I’m going to share my thoughts on each half separately, in the first half we get the story of Rhea who has been plagued with visions since she was a child, and the Witch who lives in a dreamland forest and grants young children wishes.

I loved the first half of this book, it had this dark, dream and nightmare all rolled into one, atmosphere. It was built up incredibly well as there would be a chapter from Rhea and then a chapter from the Witch, which meant that you were sucked into the story hoping that you could puzzle out what was happening.

The world building at this point was amazing, the contrast between the Witches palace made up of unimaginable things and Rhea’s home by the sea with her family made everything that was happening to Rhea seem nightmarish. It definitely kept me guessing throughout the first half at whether she was stumbling through worlds or if there was some kind of dark magic at work.

The style of writing is very intensely fairytale, there are some really amazing turns of phrase used that seem to perfectly capture the feeling that the book is trying to create. I will admit that there were a few phrases that felt a bit too riddle like for me and kind of left me trying to hard to guess what the author was trying to say but for the most part I appreciated the style.

It did mean that the pace for this part of the book was quite slow but not in a bad way, it really suited the tone. Gave me time to figure out the characters and really get into the two different worlds that we are presented with.

In the second half of the book, these two storylines converge and it becomes a mission to save Rhea’s family.

I do feel like the world building fell down a little in the second half of the book, we are introduced to a new place and there is a lot of action from the start but not as much time to get acquainted properly with the new setting or the ‘rules’ of the world. There was some groundwork there but not enough for me not to be questioning things on occasion.

The writing style changes slightly here as well because there is so much going on there isn’t the same use of language, that isn’t necessarily good or bad but it does, however, change the pace of the story. It felt like I was rushed through the second half of the story, I mean there is more urgency in that part but still, I feel like it could have emulated the first half in tone and still managed to get across the urgency.

There was so much going on in the second half and quite a few new characters that it took a lot of concentration to keep the threads of the story straight. This is a complex plot and very ambitious, and I do take my hat off to the author for that, but I do feel like the second half was somewhat rushed through and lost a bit of the magic that the first half had.

The Waking Wood is definitely a book that has stuck in my head, I loved the dark atmosphere and how the plot was put together and find it a shame that it was let down slightly by some other elements. I am looking forward to seeing what Alyssa Wees comes up with next.

a copy of THE WAKING FOREST by Alyssa Wees

In between training in ballet and watching lots of Disney movies, Alyssa grew up writing stories starring her Beanie Babies. She earned a BA in English from Creighton University and an MFA in Fiction Writing from Columbia College Chicago. Currently she works as an assistant librarian in youth services at an awesome public library. She lives in the Chicagoland area with her husband and their two cats.