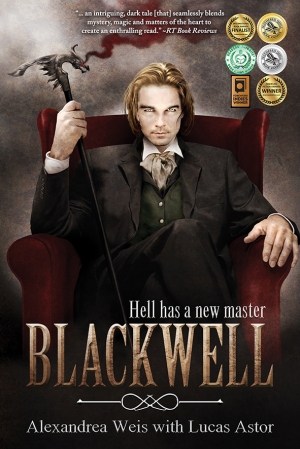 In the late 1800s, handsome, wealthy New Englander, Magnus Blackwell, is the envy of all.

When Magnus meets Jacob O’Connor–a Harvard student from the working class–an unlikely friendship is forged. But their close bond is soon challenged by a captivating woman; a woman Magnus wants, but Jacob gets.

Devastated, Magnus seeks solace in a trip to New Orleans. After a chance meeting with Oscar Wilde, he becomes immersed in a world of depravity and brutality, inevitably becoming the inspiration for Dorian Gray. Armed with the forbidden magic of voodoo, he sets his sights on winning back the woman Jacob stole from him.

Amid the trappings of Victorian society, two men, bent on revenge, will lay the foundation for a curse that will forever alter their destinies.

I wasn’t sure what I was expecting with this book but it has certainly left an impression. It’s a story as old as time, two men who end up at odds over a woman, but in this version, one of the men is very wealthy and powerful but a twisted manipulator who goes to extreme lengths to get what he wants.

Magnus Blackwell is a perfectly hateful character, I did kind of like his dark side and his entitled arrogance, to begin with, I found him quite intriguing. However, there comes a certain point in the book; I’m not sure if it’s that he becomes darker or it’s that his true personality is revealed; that he becomes a character that you despise and I found myself desperately clinging to the pages hoping that he would get his comeuppance.

I really enjoyed the setting, I actually hadn’t realised that it was set in the 1800s before I started reading, but it definitely provided a wonderful atmosphere for the story. I also was really interested in the voodoo element, that was what had piqued my interest in the blurb, and it was fascinating. Oscar Wilde’s involvement in this story was just brilliant, I did wonder what relevance it would have when his name first appeared but he was an integral part of the story and really added to the spectacle of the story.

These two authors have done well to create a suspenseful story that pulls you in with every page, it is dark and at points gruesome; the content might be too much for some to handle; but still manages to keep the reader captivated. This is the second book I’ve read by these two authors and I will certainly be looking out for more from them.

“I liked it when you stood up to Magnus tonight,” Frances softly said while running her fingers through Jacob’s wavy hair.

“I just couldn’t keep silent anymore. He looked so damned smug. I wanted to wipe that smirk off his face.”

“Why was tonight any different than the years you have spent with him?”

Jacob sat up and gazed into her eyes. “Because tonight, for the first time, I saw him for what he really is—a monster.”

one of two $20 Amazon gift cards

Alexandrea Weis, RN-CS, CRRN, ONC, PhD, is a multi-award-winning author of over twenty-seven novels, a screenwriter, ICU Nurse, and historian who was born and raised in the French Quarter of New Orleans. Having grown up in the motion picture industry as the daughter of a director, she learned to tell stories from a different perspective and began writing at the age of eight. Infusing the rich tapestry of her hometown into her novels, she believes that creating vivid characters makes a story moving and memorable. A permitted/certified wildlife rehabber with the Louisiana Wildlife and Fisheries, Weis rescues orphaned and injured animals. She lives with her husband and pets in New Orleans. Weis writes mysteries, suspense, thrillers, horror, crime fiction, action, historical, and romance. She is a member of the Horror Writers Association and the International Thriller Writers Association.

Lucas Astor is from New York, has resided in Central America and the Middle East, and traveled through Europe. He lives a very private, virtually reclusive lifestyle, preferring to spend time with a close-knit group of friends than be in the spotlight.

He is an author and poet with a penchant for telling stories that delve into the dark side of the human psyche. He likes to explore the evil that exists, not just in the world, but right next door behind a smiling face.

Photography, making wine, and helping endangered species are just some of his interests. Lucas is an expert archer and enjoys jazz, blues, and classical music.

One of his favorite quotes is: “It’s better to be silent than be a fool.” ~Harper Lee (To Kill a Mockingbird)

Review for other books by Alexandrea Weis & Lucas Astor

Death by the River