This book certainly caught my attention being a Les Misérables retelling, I haven’t heard of anyone using Les Mis as the basis for a new story before so I was intrigued, it also means I can cross another one off my Retellings Reading Challenge bingo card. I am sharing my thoughts, an excerpt, a pre-order offer and a giveaway for those of you in the US. 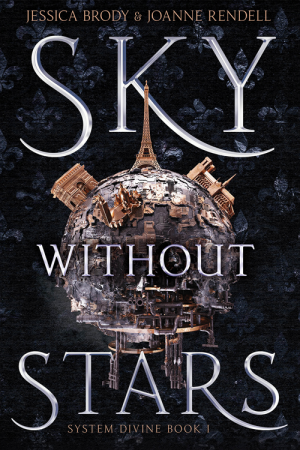 A thief. An officer. A guardian.

When the Last Days came, the planet of Laterre promised hope. A new life for a wealthy French family and their descendants. But five hundred years later, it’s now a place where an extravagant elite class reigns supreme; where the clouds hide the stars and the poor starve in the streets; where a rebel group, long thought dead, is resurfacing.

Chatine is a street-savvy thief who will do anything to escape the brutal Regime, including spy on Marcellus, the grandson of the most powerful man on the planet.

Marcellus is an officer—and the son of a renowned traitor. In training to take command of the military, Marcellus begins to doubt the government he’s vowed to serve when his father dies and leaves behind a cryptic message that only one person can read: a girl named Alouette.

Alouette is living in an underground refuge, where she guards and protects the last surviving library on the planet. But a shocking murder will bring Alouette to the surface for the first time in twelve years…and plunge Laterre into chaos.

All three have a role to play in a dangerous game of revolution—and together they will shape the future of a planet.

Sky Without Stars will be published on 26th March 2019

There are parts of Les Mis both the play and the film (confession: I actually haven’t read the book) that I found a little dull, I mean it’s an epic story but I did on occasion find my attention wandering. I was intrigued by the idea of a re-imagining of this story because I’ve not heard of it being used in such a way before and also sheer curiosity to see if this work could keep my attention. It was a shaky start but I’m pleased to say that it definitely has.

At the start of the book I found it quite difficult because it is such a bleak world that we are introduced to, luckily Chatine is such an interesting character that she kept me reading on but it did feel a bit overwhelming to be pushed into the third estate mindset. It didn’t take long though before I was hooked into the story and wondering what directions the authors were going to take.

Even though this story is based on the Les Mis story and certainly has some of the elements of the original story, it is a work that can stand on its own. The setting of Laterre, the three different classes and the technological advancements that they have despite being somewhat rudimental in attitude, made the story really compelling. I also loved that the French was still included, even if it was just here and there.

The plot loosely follows parts of the original story but definitely surpasses it, it is a story about oppression and a resistance that is building towards the authorities. It has a lot of mysterious elements as you try to piece together which side some of the characters are on, it also builds in tension as the characters get caught up in schemes and you start to wonder who you can trust. It really did have me hooked.

The book is split between three points of view Chatine, a third estate thief, Marcellus, an officer who starts to question the regime and Alouette, a girl who has lived underground for most of her life protecting relics of the First World. I thought Chatine was the most complex character, she has had it tough but is a survivor and knows how to manipulate a situation to her advantage. She was my favourite character because to begin with she doesn’t really have a side, she looks out for number one, but as the book goes on she starts to show a vulnerability that really gives her character more depth. She is also a character that I found myself constantly questioning, just as I thought I knew how she would react to a situation, she would surprise me.

Marcellus was also interesting caught between what he has been brought up to believe and what he feels is right and wrong, I liked that he had to start second-guessing everything that he had been taught. I also liked the interactions between Chatine and Marcellus how they start to form a bond even though there is a lot that would ordinarily stand between them.

The only character that I felt could have had a little bit more going on was Alouette, I think it’s mostly down to her setting, she’s very secluded and sheltered, so she doesn’t quite capture your attention the way the others do. It’s a shame because she does have some fantastic qualities but for a lot of the book you don’t really get to know her that well and then just as her character is faced with some interesting problems the book ends. I also wasn’t sure if I felt the spark that was supposed to be between her and Marcellus, there was potential for it to feel a bit more authentic but it didn’t quite hit the mark for me.

I cannot believe where this book ended, I don’t know how long I’ll have to wait for the next book but I really want it now. Sky Without Stars is a brilliant read, with a really fascinating take on the original story, and I am looking forward to seeing where these two authors take us next.

The rain was falling sideways in the Marsh. It was never a straight downpour. It was always crooked. Just like the people here. Con artists and hustlers and crocs, the lot of them.

Anyone can be a saint until they’re hungry enough.

Chatine Renard was perched high above it all, watching the stream of people churn through the busy marketplace like clotted blood through a vein. She was straddling an exposed metal beam that once connected the old freightship to its roof.

At least, that’s what Chatine had been told—that the Frets were once titanic flying vessels that soared across the galaxy, bringing her ancestors to the planet of Laterre, the coldest and wettest of the twelve planets in the System Divine. But years of neglect and crooked rain had corroded the PermaSteel walls and ceilings, turning the staterooms in the passenger freightships into leaky, mold-ridden housing for the poor, and this cargo freightship into an open-air marketplace.

Chatine pulled her hood farther down her forehead in an attempt to block her face. Much to her dismay, she’d noticed over the past few years that her eyelashes had grown longer, her chest had filled out, her cheekbones had become more pronounced, and her nose had slimmed to a dainty point, which she despised.

She had streaked her face with mud before coming to the Marsh today, but every time she caught sight of her reflection in a puddle or the metal of a partially collapsed wall, she cringed at how much she still looked like a girl.

The Marsh was far more crowded today than usual. Chatine leaned forward and balanced on her stomach, hugging the beam to her chest as she scanned the countless faces that passed beneath her. They were always the same faces. Poor, downtrodden souls like her trying to find creative ways to stretch their weekly wages.

Or con their neighbor out of a larg or two.

Newcomers were rare to the Marsh. No one outside of the Third Estate bothered with the picked-over cabbages and mangy turnips for sale. With the exception of Inspecteur Limier and his army of Policier droids tasked with keeping the peace, the Frets and the marketplace in its center were normally avoided at all costs by anyone who didn’t live here.

Which was why the man in the long coat immediately caught Chatine’s eye. His wealth was written all over his groomed black beard, matching hair, pressed clothes, and sparkling adornments.

Second Estate, to be sure.

She’d never known the First Estate to ever venture out of Ledôme. The climate-controlled biodome sat high on the hill just outside the capital city of Vallonay, shielding the First Estate from Laterre’s persistent downpours.

And the slums below.

Chatine’s eyes raked over the man, taking in every stitch and every button. Her gaze expertly landed on the gold medallion dangling like bait from his neck. She didn’t have to see it up close to know it was a relic from the Last Days, rescued from the burning embers of a dying planet. The Second Estate loved their First World relics.

But it wouldn’t be long before the rest of the crocs in the Marsh spotted the treasure too and made their play. Which meant Chatine had to move fast.

First up the pre-order gift pack that you can get your hands on, here are the details…

Pre-order a hardcover of SKY WITHOUT STARS by Jessica Brody and Joanne Rendell from a participating indie bookstore* before March 26, 2019 and you’ll receive an exclusive Sky Without Stars Gift Pack, including the following: 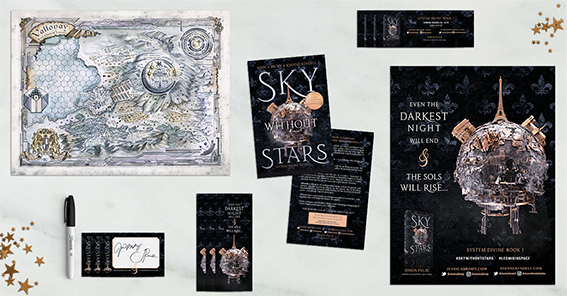 The gift pack will be included with your book when it is shipped or picked up in store.

a copy of Sky Without Stars

Jessica Brody is the author of more than 15 books for teens, tweens, and adults including Addie Bell’s Shortcut to Growing Up, A Week of Mondays, Boys of Summer, 52 Reasons to Hate My Father, and the three books in the sci-fi Unremembered trilogy. She’s also the author of the Descendants: School of Secrets series, based on the hit Disney Channel original movie, Descendants. Her books have been translated and published in over 23 countries and Unremembered and 52 Reasons to Hate My Father are currently in development as major motion pictures. She lives with her husband and four dogs and splits her time between California and Colorado.

Joanne Rendell is the author of three novels and holds a PhD in English literature. She teaches fiction writing to teens and kids and is a board member for the youth Shakespeare company, New Genesis Productions. With her husband and son, Joanne divides her time between New York City, and New Paltz, New York.