Today I am one of the blogs kicking off the tour for The Sins of the Sire. 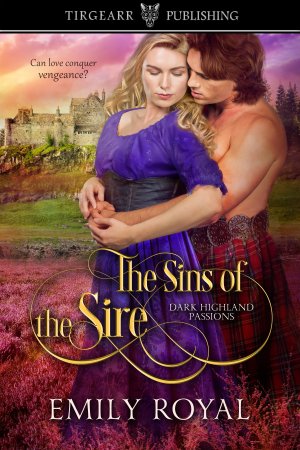 Two years ago, English noblewoman, Elyssia De Montford, risked her life to free the Highlander held prisoner by her sadistic fiancé. She cannot forget the man who first stirred her heart–a memory that burns anew when she finds herself once more on the road to Scotland.

Tavish MacLean has sworn vengeance. It’s been six years since his beloved sister was raped and murdered by an English lord, a tragedy which almost destroyed his family. On his deathbed, his father demanded retribution and Tavish pledged before his clan to enslave the lord’s daughter then send her back to her father, pregnant with a Scottish bastard. When he learns that she is travelling north, he seizes his opportunity and orders her abduction.

But when his men fling the prisoner before him, Tavish recognises Elyssia, the woman who once saved his life. Loyalty to his clan trumps the debt he owes her and he claims Elyssia as his captive. Though she’s one of the hated English, her willing body ignites passion in him at night, though she fights him at every turn during the day. As time passes, he questions his loyalty, finding himself increasingly enthralled by his fiery captive.

Treachery surrounds Clan MacLean. When long-buried secrets come to light, Tavish must risk his life and his clan, or all that he holds dear will be destroyed.

I will admit that I had a few preconceived notions about this book, but it is certainly a lot different from what I had expected, it surprised me in both good and bad ways.

I had a feeling like it was maybe going to be a bit fluffy but it was actually dramatic and not in an exaggerated way but in a gritty and intense way. There was a lot of action packed into this book, I never felt it lag in any way and got really caught up in what was going to happen next.

I liked Elyssia’s fire, even though as a woman she has little power, she still manages to stand up for herself, her sister and what she believes in. I did think that maybe at times it would have been nice to see her care a little bit more about herself as she does let a lot of things happen to her to protect her sister but at least it showed her loyalty.

It was, of course, the Highlander, Tavish, that drew me to the book in the first place; I have a soft spot for Highlanders; I liked that he was so conflicted, however, he could be a little harsh at times, in some ways that were almost unredeemable. He did luckily always manage to make me root for him again, the way he tried to be fair even though he was feeling a lot of pressure from his clan to act a certain way.

There were some very graphic and violent scenes that I was not expecting, Elyssia certainly has a lot of hardship to bear and there were a few times that I felt maybe it was a little too much, however, in a strange way it also really spoke to my emotions, I felt every injustice and every hurt for Elyssia. I can imagine it might be quite difficult for some people to read and even though I could get through it to the heart of the story and found the majority of it enjoyable I can easily see how people would maybe go the other way.

I also bristled at the continual use of the words whore and half-wit, being a Scot myself I know that we can be exceptionally colourful in our choice of insults if we’re feeling passionate enough about something so there could have been a bit more variety in word choice.

This book did surprise me, it had a lot more to it than I first envisaged and the pages turned easily, there are a few bits that some may find hard to read and I wouldn’t call it light entertainment but I think I would join Emily Royal for some. more highland adventures. 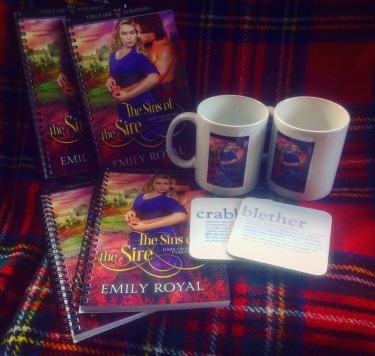 So long as you are on Emily Royal’s mailing list by 10thMay when the draw is happening, you will be eligible to win.

Emily Royal is a mathematics geek who grew up in Sussex, UK and has always had a passion for romance and strong alpha heroes. After graduating from Oxford University and enjoying a brief dream of becoming an airline pilot, she started a career in financial services in order to indulge her love of mathematics.

She now lives in rural Scotland with her husband, two daughters, and a menagerie of pets including Twinkle, an attention-seeking boa constrictor. She reignited her passion for romance when she joined the Romantic Novelists’ Association under their New Writers’ Scheme.

When not working on algebra or keeping Twinkle from slithering over the keyboard, Emily enjoys painting and playing the piano. She can often be found wandering about the hills of Scotland looking for inspiration.