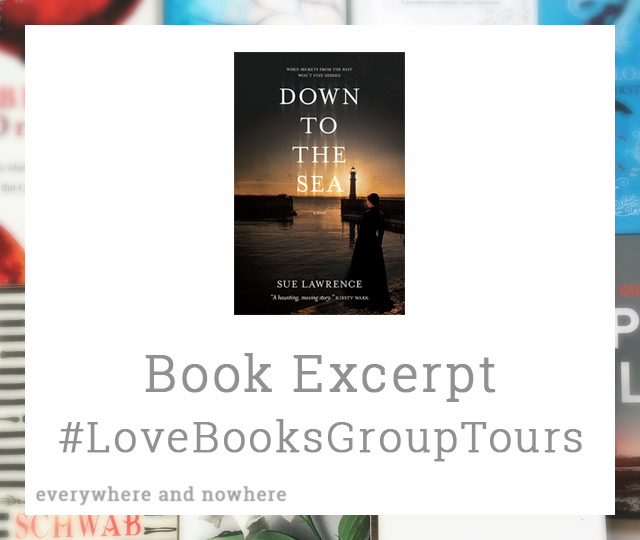 If you are undecided on your weekend reading then have a read of this excerpt from Down to the Sea.

When Rona and Craig buy a large Victorian house up from Edinburgh’s Newhaven district – once teeming with fishing boats – they plan to renovate and set it up as a luxury care home. But something is not quite right: disturbing sounds can be heard when the sea mists swirl; their unpredictable neighbour makes it clear that the house was not always a happy family home. And their ‘characterful’ historic pile has a gloomy cellar harbouring relics from days gone by.

Back in the 1890s, superstitious fishwives blame young Jessie for the deaths of their menfolk in a terrible storm, and she’s forced into the Newhaven Poorhouse. In those less enlightened times, life was often severe, cruel even, and Jessie is entirely at the mercy of a tyrant matron. But one inmate is not all she seems. Jessie begins to pick at the truth, uncovering the secrets and lies that pervade the poorhouse – and which will have profound and dangerous consequences in the future.

Jessie tapped on the back door and waited. Soon she heard the noise of the key in the lock and the door opened. The stout woman stood there, glowering. ‘Come away in, then, and don’t you ever use that main door again.’ She locked the door behind Jessie. ‘This is the door you’ll use. It leads only into the garden and that’s all enclosed by walls.’ She pointed at a small door in the corner. ‘There’s no way out, just in case you’re thinking of heading back down the road.’

‘No, ’course not,’ stammered Jessie, looking all around the kitchen. The huge blackened range had several large pans on it and hanging on the rail at the front were a row of tatty, grey kitchen rags.

‘Right. Clothes off,’ barked the woman, walking towards the table where a pile of garments lay.

‘You need to put on the same as everyone else. Here’s your petticoat, shift, cap and stockings. Washing day’s Monday so be sure you keep it all clean till then. Your bath day’ll be a Friday. You’re lucky, at most other poorhouses it’s a bath once a fortnight but Matron’s keen on everyone being clean.’

The woman leant over Jessie and sniffed. ‘You stink of fish. It’s a good job it’s Thursday today.’ She peered at Jessie’s face. ‘You’ve got a smudge. Wipe it off with one of those rags.’

Jessie hung her head. ‘It’s not dirt, it’s my birthmark.’

The woman stared again at the broad, dark brown mole that extended from Jessie’s upper lip to one nostril, then she sat down on a chair, her fat thighs wide apart under her grubby apron.

Jessie began to pull off her tight shoes, trying hard to stand on one leg without wobbling. ‘I’ve never had a bath before, only a scrub-down in the basin in the kitchen.’

‘Don’t be getting too keen. You’ll be in a queue, at least twenty of you in the same water. By the time the last person’s been in, it looks like thin, greasy mutton broth – and cold at that.’

The woman helped Jessie pull her dress over her head.

‘I’m Molly, by the way. I’m the cook here. You know you’re to help me in the kitchen, don’t you? The last lassie, Lizzie Smith, was sent off to Leith last night so I need you to start in the scullery as soon as Matron’s seen you. There’s still all today’s porridge plates to be washed.’ Molly pointed to a deep sink piled high with bowls. ‘How old are you?’

‘Just a year younger than Lizzie. Poor wee mite, she’ll not fare well down at the docks. But that’s how Matron punishes them.’

As well as writing three very popular and well-reviewed historical mysteries published in the UK and overseas, Sue Lawrence is one of the UK’s leading cookery writers, with eighteen published cookbooks. Having trained as a journalist in Dundee, she won BBC’s MasterChef in 1991 and became a food writer, regularly contributing to Scotland on Sunday, as well as being the Sunday Times’ food writer for six years. Born in Dundee and raised in Edinburgh, she now lives near Newhaven, Edinburgh – the setting for her latest novel. She has won two Guild of Food Writers Awards and a Glenfiddich Food and Drink Award, and now focuses on researching and writing historical fiction.