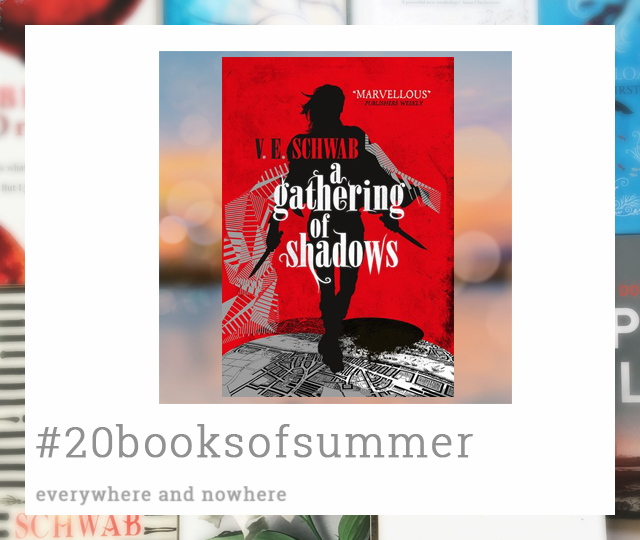 I was trying to get this written up for last week but things have been hectic, but eventually, I have found the time to share my thoughts on another one of my summer reads. 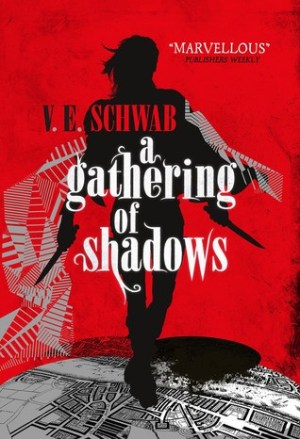 Now, restless after having given up his smuggling habit, Kell is visited by dreams of ominous magical events, waking only to think of Lila, who disappeared from the docks as she always meant to do. As Red London finalizes preparations for the Element Games–an extravagant international competition of magic meant to entertain and keep healthy the ties between neighboring countries–a certain pirate ship draws closer, carrying old friends back into port.

And while Red London is caught up in the pageantry and thrills of the Games, another London is coming back to life. After all, a shadow that was gone in the night will reappear in the morning. But the balance of magic is ever perilous, and for one city to flourish, another London must fall.

I have been looking forward to this one for quite some time ever since I read the first book in the series, and even though it was at the tail end of last year that I read A Darker Shade of Magic once I had dived back into the world of multiple London’s it felt like it was only yesterday.

This is one of those strange times as a reviewer when you absolutely loved a book but can’t think of anything to say that will convey just how amazing said book is. I don’t know why I thought it wouldn’t be possible but A Gathering of Shadows is even better than I thought it was going to be. I think this is because at this stage we know enough about the world that there is a lot more action, plus there is a lot more at stake in this book.

It was great getting to catch up with Kell again, he’s a lot edgier in this book and you can feel the weight of everything that he feels burdened with. I love that he is at a kind of impasse in his position, he has a lot of power but after the events of the first book, he isn’t trusted and is starting to feel the confines of restrictions. I will admit to spending most of the book hoping and praying that Lila and Kell would come back into each others orbit, the wonderful tension of that alone could have kept me turning the pages but there was so much more to keep my interest.

The Element Games were amazing, it gave us the chance to learn more about the different cultures and gave Rhys a little bit more of the spotlight. Which is fantastic because I definitely wanted more of him and I was glad that he was his witty and charming self, but that there was a vulnerable side to him as well. The relationship between the two brothers was great, I loved that Kell was so protective of Rhys but that they could still wind each other up.

I was so happy that Lila got to have an adventure and that she was still a strong and feisty female who took every opportunity and wasn’t afraid to get her hands dirty to get what she wants. But I will admit that I was extra happy to get to any chapters that were based on the ship with Lila because of the elusive and captivating Alucard Emery, what a character. I could read about him all day and the chemistry he had with numerous characters just had me itching to know more.

I really want to gush and gush about things that happen in this story but I really don’t want to spoil anything, but I can already tell that the next book is going to be an emotional rollercoaster and I can’t wait but I’m also kind of terrified to get into it. 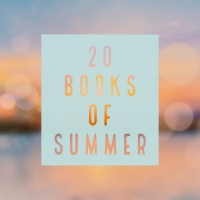 Reviews of other V.E. Schwab books

A Darker Shade of Magic