I was supposed to be sharing my thoughts on this book with you today but life things have gotten in the way of me reading so instead I’m sharing an extract from the book that I’m sure will have both me and you desperate to dive into this one. 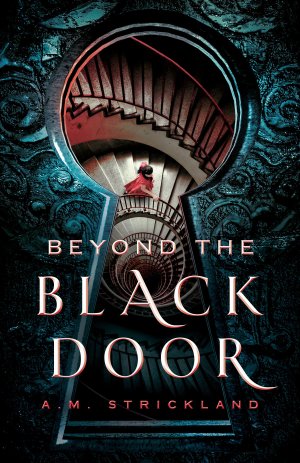 Kamai was warned never to open the black door, but she didn’t listen …

Everyone has a soul. Some are beautiful gardens, others are frightening dungeons. Soulwalkers―like Kamai and her mother―can journey into other people’s souls while they sleep.

But no matter where Kamai visits, she sees the black door. It follows her into every soul, and her mother has told her to never, ever open it.

When Kamai touches the door, it is warm and beating, like it has a pulse. When she puts her ear to it, she hears her own name whispered from the other side. And when tragedy strikes, Kamai does the unthinkable: she opens the door.

A.M. Strickland’s imaginative dark fantasy features court intrigue and romance, a main character coming to terms with her asexuality, and twists and turns as a seductive mystery unfolds that endangers not just Kamai’s own soul, but the entire kingdom …

I was five the first time I asked my mother about the black door. The moment seared itself into my memory.

We were walking together through her soul, my hand in hers, the deep blue tiles of the place that was both hers and her as cool as water beneath my silk-slippered feet.

We’d done this for as long as I could remember, exploring her soul while our bodies slumbered, our spirits free to traverse the sleeping realm to which souls belonged. My mother would explain how people such as us—soulwalkers—could wander souls by night, and she would describe the gods. And yet she never mentioned the black door I always found in her soul.

On this particular night, I finally gathered my courage and stopped in the wide hallway, pointing. “Mama, what is that door?”

In my mother’s soul, the sandstone halls were rosy, lit as if a fireplace burned merrily next to every stretch of wall. There was no fire; it was my mother’s warmth, her light. The walls were pale and smooth, perforated with airy latticework that revealed the glow of rooms beyond, as if there were nothing to hide here, while the long hallways with deep azure tiles beckoned like fingers, hinting at wonders just out of sight.

But the black door was closed tight. Its sleek black surface parted the creamy sandstone of the wall like a slick dark stone in bright water, the sinuous lines of its frame meeting in a point at the apex. It gleamed like midnight fire. Despite seeming to draw in the light around it, it lured me like a candle’s flame.

By then I’d learned that fire would burn me … but only through touching it several times already. I’d never touched the black door, and I wanted to.

This dark, tantalizing danger didn’t seem to belong in my mother’s bright, inviting soul. My mother, her eyes narrowing, stared at the door for a moment, her jaw clenched, a look on her beautiful face like I’d never seen. There was resolve, anger, and yes, fear. I’d never before seen my mother afraid.

Turning away, she knelt before me, took both my hands, and said very seriously, “Kamai, you can never open that door. It’s best if you just forget about it.”

“But, Mama, you said I could go anywhere in your sleep house.”

A smile tugged at her mouth. “My soul house, not my ‘sleep house.’ It’s about time you started using the proper name: nehym.” The word actually meant “soul house” in the old tongue. “And that door isn’t a part of my nehym. It belongs to somewhere else. You must understand how these things work, Kamai, because someday you’ll be able to walk anyone’s soul at your whim and find what you will inside. But you must never”—she leaned closer, holding my eyes with the liquid brown of her gaze—“open that door.”

Trepidation overrode my curiosity. “Is it hiding something bad?”

She leaned forward to brush her lips over my forehead—lips, I would one day learn, that were the envy of both men and women. Marin Nuala’s lips, I’d later hear someone say, could unlock anyone’s. “Something very bad. Something evil. You won’t be safe from what’s behind it. It wants the door to open.”

I was both intrigued and disturbed that the evil thing behind the black door could want, that it had desires … and that it was lurking in my mother’s nehym. “What is it?”

She stared at me for a long moment. “I pray you’ll never know.” She stood and strolled the hall, away from the black door. Even here, where only I could see her, she dressed like a queen, her pale skin accented by a silk blue gown that swirled about her hips as she walked, her belt of fine gold links glimmering in the warm light. “Now, come, tell me what else I’ve taught you this evening. If you repeat it true, I’ll give you a surprise.”

I couldn’t keep the excitement from my voice. “Will it be my own sleep hou—nehym?” I could learn quickly, when I had an incentive.

My mother glanced down, rare sadness in her gaze. “You don’t have one, my dearest.”

My feet ground to a halt. Everyone’s soul was a house. It could be as dark, primitive, and dank as a cave, or as vast, ornate, and mazelike as a palace. My mother’s nehym was as warm and welcoming as a sprawling country villa, but with so many halls and wings and doors, no walls in the waking world could have contained it. To not have my own made me want to cry until I got one.

“Of course you do, sweetness,” she said, swiping away my brimming tears with her thumbs. “It’s only that sometimes these things are hidden from us, kept secret, even from within.” She placed two warm fingertips over my heart. “You don’t have a nehym because your soul is so deeply asleep that no one can find it. No one can walk your halls and discover your secrets that way.”

Something flickered across her face, like a shadow, and I knew she wasn’t telling me the entire truth. Even then I had a decent sense of such things.

“It is good that it stays hidden,” she added, smoothing down my hair, a tousled mirror of her own cascade of dark curls. “For it stays safe.”

“Like from the evil creature behind the black door?”

She drew in a breath. “You’re safe from it. But I don’t want you to speak of the door or what’s behind it anymore.”

“Did you open the door?” I asked, glancing over my shoulder. “Is that why it’s here?”

She shook her head. “No, my darling. It’s here because you are. It follows you, because it knows that only you can open the door. But that’s why I’m safe too, because I know you won’t. Now, tell me what else you’ve learned this evening. No more talk of the other thing. Who can walk the halls of souls and discover the sleeper’s deepest secrets?”

“People like you. And me,” I added, with some satisfaction. “And priests and priestesses. But we’re different from them, because we’re soulwalkers.” That was what my mother called us. At five years old, I didn’t understand everything by far, but I at least knew for sure we weren’t priestesses, since I found going to temples dreadfully dull, and this wasn’t dull. And besides, everyone knew that priests and priestesses could explore souls. No one knew we could.

“And what is a soulwalker, when we’re asleep like we are now?”

“A spirit.” Which was a layman’s term for our cerebral, conscious aspect—just like the soul was our subconscious, but I didn’t yet know any of those words.

“And who can know what we do?”

“Not even Hallan and Razim, remember?”

I nodded with proper solemnity. Hallan and Razim were the closest thing I had to family after my mother, close to a stepfather and stepbrother, though not quite. It had been difficult not to brag about my secret soulwalking ability to Razim, older than me by a couple of years, but I’d managed.

And now it seemed like there was a new rule that was just as serious, if not more so, than never betraying the secret of our soulwalking:

I didn’t press her about it, because I wanted to believe it was as simple as that: I wouldn’t open the door, and my mother and I would be safe. And maybe, if I learned enough about soulwalking, practiced hard enough, not only would I make my mother proud, but someday I would find my own soul.

“Now tell me the gods’ story,” my mother said.

I drew myself up as tall as possible. “In the very beginning of time, there was a husband and a wife, and they were surrounded by darkness.”

“The Darkness,” my mother corrected.

“That’s what I meant. Darkness kept following them, trying to swallow them, so they always had to move. But one day, they were going to have a baby, so they stopped running. They fought the Darkness back to make a home for the baby, and then circled her every night after she was born to keep the Darkness away. They’re our sun and moon, and their daughter is the earth.”

It was a highly distilled version of the gods’ history, but it was easy enough to remember. Simple stories for a simple age, and yet it was a story we all on some level believed. It comforted me to think of bright parents hovering over a sleeping girl’s bed, keeping her safe from danger.

Despite that, I was already drawn to dark mysteries. And my question about the door had only left me with the burn of unassuaged curiosity. Later, I couldn’t even recall what my mother’s promised surprise had been, but I could remember the way my eyes drifted back, seeking one last glimpse of the black door.

a copy of BEYOND THE BLACK DOOR by A.M. Strickland

AdriAnne Strickland was a bibliophile who wanted to be an author before she knew what either of those words meant. She shares a home base in Alaska with her husband, her pugs, and her piles and piles of books. She loves traveling, dancing, vests, tattoos, and every shade of teal in existence, but especially the darker ones. She is the coauthor of SHADOW RUN and SHADOW CALL (Delacorte/Penguin Random House) and author of the forthcoming BEYOND THE BLACK DOOR (Imprint/Macmillan).