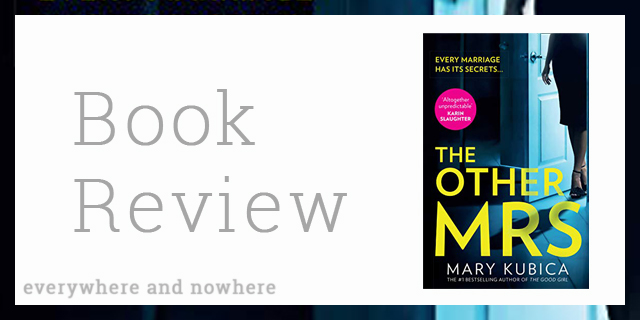 I’m kicking off March (only a couple of days into the month) with a psychological thriller that will keep you guessing.

EVERY MARRIAGE HAS ITS SECRETS…

When Sadie moves with her husband Will and their two children to a tiny coastal town, it’s a fresh start. Will swears the affair he was having back in the city is over and Sadie believes him. But their new beginning is tainted when a local woman is murdered, leaving Sadie convinced there’s a killer in their midst.

Hot-headed, beautiful Camille is obsessively in love with Will. She’s even prepared to follow him thousands of miles to stake out his new home in secret – and in doing so, becomes the only witness to a brutal crime.

But who is Camille really, and what is her connection to the dead woman? And as the murder investigation deepens, whose secret will be revealed as the darkest of them all?

It’s been a little while since I’ve read a psychological thriller and I was excited to dip my toe back into the pool with The Other Mrs, I haven’t read any of Mary Kubica’s books before but have heard a lot of good things about her work.

I could definitely see where the praise came from, the writing created such an amazingly tense and atmospheric reading experience with characters that drew me in and then had me questioning my own judgement.

The story is told from two main points of view, Sadie and Camille, but there are also a few other characters that we get to hear from throughout the story, that all adds to the puzzle of who the killer is. I liked that there was more than one perspective because it did add an extra element of tension and mystery to the story.

Having the story set on an island also gave the story that unsettling edge, with limited travel to the mainland it was easy to share in the disquiet that it caused in the community. I don’t know why but I always feel like stories like this set in more remote places just feel more sinister, and this book certainly had that in spades.

Unfortunately, there were a few things that just didn’t sit well with me in this book. Sadie as a main character, to begin with, isn’t all bad but as the book progresses she becomes this pretty unhinged and unpleasant person and I don’t think this is entirely warranted. It’s hard to say more without giving away spoilers but I found that the book starts to drag a bit in the middle as she becomes unreasonable and starts doing things that feel suddenly very out of character and a bit superfluous. Almost like the writer was trying too hard to create a pool of “suspects” even though it’s obvious that it’s being set up that way.

Although it is hard for me to know if this will be the case for everyone or if it is because fairly early on I had a part of the story pegged and that did mean that for a lot of my reading experience I was kind of picking apart what each of the characters did to see if it was plausible and again, unfortunately, in most cases, it wasn’t. I did have to read to the end because I couldn’t figure out how the author was going to be able to explain it away and whilst I didn’t quite see the final “twist” coming, I didn’t find it very convincing. Although it did give the book a bit of redemption there just wasn’t enough set up throughout the rest of the book for me to really believe it and it felt a bit tacked on.

It is a shame because actually in this book there are a lot of ingredients to make an entirely plausible story, I don’t want to delve too much into it because I don’t want to spoil it for other readers but if certain things had been framed in a different way the book would have been just as exciting and intense without becoming quite as unbelievable.

Outside of a few parts in the middle of the story that lagged, the pace was pretty spot on, especially in the last quarter of the book. This is the kind of book that you can easily lose yourself in as you race to the end to discover what actually happened.

It was a tense and chilling read with some interesting characters, some I wish were explored a little more but it still entertained me.

Mary Kubica is the New York Times and USA Today bestselling author of five novels, including THE GOOD GIRL, PRETTY BABY, DON’T YOU CRY, EVERY LAST LIE and WHEN THE LIGHTS GO OUT. A former high school history teacher, Mary holds a Bachelor of Arts degree from Miami University in Oxford, Ohio, in History and American Literature. She lives outside of Chicago with her husband and two children. Her first novel THE GOOD GIRL was an Indie Next pick in August of 2014, received a Strand Critics Nomination for Best First Novel and was a nominee in the Goodreads Choice Awards in Debut Goodreads Author and in Mystery & Thriller for 2014. Mary’s novels have been translated into over thirty languages and have sold over two million copies worldwide. She’s been described as “a helluva storyteller,” (Kirkus Reviews) and “a writer of vice-like control,” (Chicago Tribune), and her novels have been praised as “hypnotic” (People) and “thrilling and illuminating” (Los Angeles Times).

She is currently working on her next novel.

2 thoughts on “Book Review | The Other Mrs #BlogTour @HQstories”