I have been reading so many good books recently, today I’m diving back into crime with a book I was super excited to read. 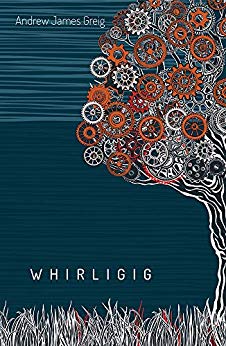 Just outside a sleepy Highland town, a gamekeeper is found hanging lifeless from a tree. The local police investigate an apparent suicide, only to find he’s been snared as efficiently as the rabbit suspended beside him. As the body count rises, the desperate hunt is on to find the murderer before any more people die. But the town doesn’t give up its secrets easily, and who makes the intricate clockwork mechanisms carved from bone and wood found at each crime?

Whirligig is a tartan noir like no other; an exposé of the corruption pervading a small Highland community and the damage this inflicts on society’s most vulnerable. What happens when those placed in positions of trust look the other way; when those charged with our protection are inadequate to the challenge; when the only justice is that served by those who have been sinned against?

This debut crime novel introduces DI James Corstophine – a man still grieving for a wife lost to cancer; his small close-knit team of passed-over police and their quiet Highland town. He’s up against a killer who plays him as easily as a child. For a man whose been treading water since the death of his wife, he’s facing a metaphorical flood of biblical proportions as he struggles to understand why these murders are happening, and who is behind each carefully planned execution. All the time, the clock is ticking.

I have been really excited about this book for some time, as soon as I heard about it I knew I wanted to read it. Recently I’ve been finding that I get a bit of a crisis of confidence before I start books that I’ve been looking forward to because I worry that I’ve built them up so much that they won’t live up to my expectation. I am so glad to say that this didn’t happen with Whirligig.

I was sucked in from the first line and felt transported through the lyrical writing to a setting that is the perfect backdrop to the story that unfolds. The atmosphere is tense and sinister and even though there are some very grim moments I was drawn further and further into this story desperate to find out what was going on.

It is an outstanding storyline, the attention to detail gave me chills, it’s the kind of story that you can’t help but hold in your mind for days after reading. With Whirligig it’s not just who is killing people but also who is next, as the investigation brings up more questions than answers and uncovers some deeply unsettling secrets.

DI Corstophine is a great character, he felt really genuine and I liked that he was better at his job than his superiors would give him credit for. The small community setting led to some interesting dynamics between the team and the community and I liked that even though this was an unusual occurrence Corstophine was able to play things to his advantage. He was also able to bring out the best in his team, he worked very well with DC Mckenzie worked together and she was also a character that I found both interesting and believable.

I wish I had more words to describe how brilliant this book is, so far they don’t quite feel adequate enough but I can honestly say that I enjoyed every moment of reading Whirligig and it will easily make it onto my favourite books of the year list. I would highly recommend this book to everyone and I cannot wait to see what this author comes up with next.

Born in London, moved to historic Monmouth as a young teenager and escaped as soon as I could to the bright lights of Bristol where I combined the careers of sober aerospace engineering and libertine sound engineering for as long as I could juggle these disparate and separate worlds.

Now living happily in central Scotland, where I enjoy writing books, playing music and exploring the great outdoors with my best friend who happily is my wife.