After reading some pretty impressive but intense books last week I decided I needed a change to something a bit lighter and as soon as I saw Cathy Hopkins on my list I knew it was just the ticket. 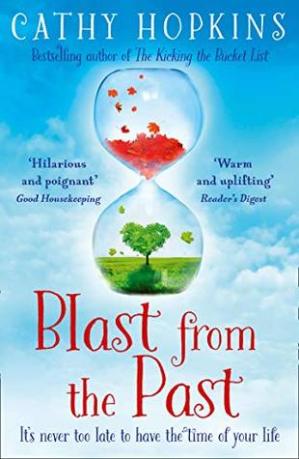 On a trip of a lifetime to India, Bea is given an unexpected fiftieth birthday present – an hour with a celebrated clairvoyant. Unlucky in love, Bea learns that her true soulmate is still out there ̶ and that he’s someone she knew in a past life.

Returning home, Bea revisits the men in her life and can’t resist looking up a few old lovers – the Good, the Bad and the… well, the others. As Bea connects with the ones that got away, she suspects that her little black book has remained shut for a reason. But one man out there has her in his sights.

Funny and wise, this is the perfect read for anyone who believes in finding love, no matter what their age.

After having read a few of Cathy Hopkins books I knew that if I wanted something a bit lighter then I was coming to the right place and since I was looking for something that would make me smile after reading the blurb I knew I had found the right book to do it.

I am definitely like Bea, very cynical about clairvoyants and psychics, so I really felt as if I was going through everything with her as she experienced it. It was like meeting someone that you feel like you’ve known for years although you’ve only just met and then getting to experience a crazy adventure with them. The set up of the book was really good for that as well told both in the present and as insights into Bea’s former relationships it gave me a really good idea of how she had evolved throughout the years.

Apart from a similar cynicism, I felt like I could really connect to Bea with certain aspects of her life, feeling alone and not able to find what makes her happy, she was a very accessible character without being overly morose about her situation. I also loved her friendships, there is nothing that puts a smile on my face more than really fun friends in a story and watching them push Bea past her limits and further down the rabbit hole of tracing her past life.

I actually quite enjoyed how different this storyline was, I’m not sure how much credence I would give it in real life, but I was very interested in how they tracked down Grace and Billy and finding out about their story, and the experience of the hypnosis for Bea. I don’t think I was expecting it to go quite into so much detail about it, I thought maybe it would be almost like a starting point for the story and then not really be explored but I was pleasantly surprised at how well it worked weaved in with the story.

Obviously, there is a lot of fun to be had as Bea delves back into her past relationships trying to figure out if any of them are her soulmate and this had some very comical moments. Although I felt like sometimes there was a lot of overthinking from Bea about this which at times drew the story out a bit too much. There was also a little insert now and again from Bea’s soulmate, meant to tease the reader into wonder at who it is which I also felt I could have used a little less of, although I had kind of figured it out after reading the first one so maybe that’s why I felt that way.

Blast From The Past is a warm and lighthearted book that will lift your spirits and take you on a bit of an adventure.

Reviews of other Cathy Hopkins books

The Kicking The Bucket List | Dancing Over The Hill

One thought on “Book Review | Blast From The Past”