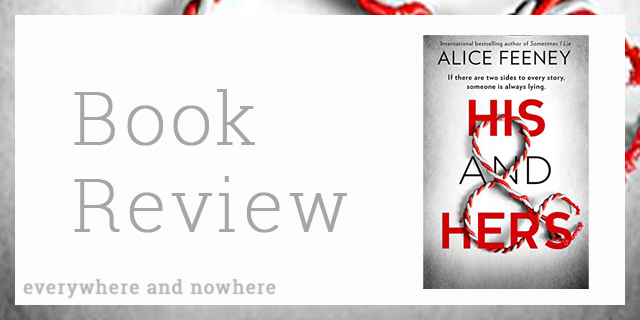 Today is publication day for the latest book by Alice Feeney, His and Hers, and to celebrate I’m sharing my thoughts.

If there are two sides to every story, someone is always lying…

When a woman is murdered in Blackdown village, newsreader Anna Andrews is reluctant to cover the case. Anna’s ex-husband, DCI Jack Harper, is suspicious of her involvement, until he becomes a suspect in his own murder investigation.

Someone is lying, and some secrets are worth killing to keep.

You know when you read a blurb and you just know that you are going to enjoy a book, well as soon as I read the description of His and Hers I was sold. I loved the last book I read by this author, Sometimes I Lie, but I find it’s always best not to get your hopes up too much just incase, luckily I was in fact so gripped by it that I managed to devour it in a couple of sittings.

His and Hers is told from two perspectives, Jack and Anna, and it’s the kind of story that has you immediately questioning the characters motives and has you second guessing yourself at every turn. Honestly I felt like I couldn’t even attempt a guess at who the murderer was, each of the characters were secretive and connected to the crime in some way, it made for some tense reading.

The story itself at a point gets very dark and I have to say I wasn’t expecting it, I could actually feel my skin crawl at one point I was so absorbed by the atmosphere created. It also, as the story builds to its conclusion, added that extra layer of suspense on an already riveting story. I really wish I could say more but this is one of those books where the less you know the better.

I really would recommend this book especially if you are in the mood for a surprising and captivating thriller. I am looking forward to seeing what this author comes up with next, it will be highly anticipated that’s for sure.

Reviews of other books by Alice Feeney