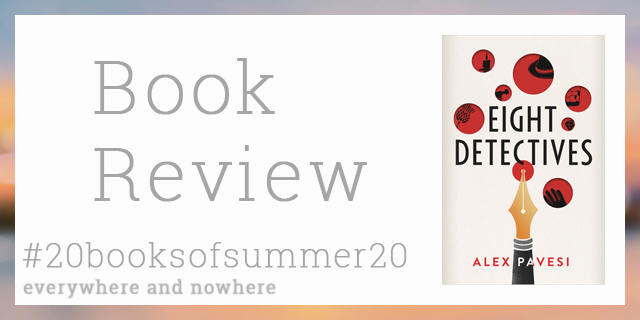 Book five of my challenge, slow but steady progress.

All murder mysteries follow a simple set of rules. Grant McAllister, an author of crime fiction and professor of mathematics, once sat down and worked them all out.

But that was thirty years ago. Now he’s living a life of seclusion on a quiet Mediterranean island – until Julia Hart, a sharp, ambitious editor, knocks on his door. His early work is being republished and together the two of them must revisit those old stories: an author, hiding from his past, and an editor, keen to understand it.

But as she reads, Julia is unsettled to realise that there are things in the stories that don’t make sense. Intricate clues that seem to reference a real murder, one that’s remained unsolved for thirty years.

Julia realises she’s unwittingly entered a battle of wits where there can only be one winner. But Grant will soon realise that he underestimates her at his peril…

Eight detectives will be published on the 20th August 2020.

I have to say I do enjoy and story within a story, I hadn’t quite realised that this was going to be featured in this book so it was a pleasant surprise. Although the book does start off on one of the stories and to be honest I did have to double check myself because for a moment I thought I had mixed up which book I was about to read.

I really liked The White Murders stories, there was something about the atmosphere of them and as we discover that there are inconsistencies in them I found myself really paying attention to see if I could figure out what they were. I only had an inkling toward one which turned out to be correct but there was a lot of enjoyment in the challenge.

Of course the book is framed so that as a reader you are suspicious of the author Grant McAllister from the start and as we switched back to the present timeline I was intrigued to find out why he was being so evasive. I do feel though that I wasn’t quite as invested in this part of the book as I could have been. The set up of the story is clever but it doesn’t give the reader as much time to be involved with Julia and Grant and at times their sections were a little bit too repetitive.

The murder mystery being a maths formula was another interesting aspect and one that I could follow for the most part but I will admit that there were a few times that it kind of lost me completely. I don’t think it really matters in the grand scheme of the book but as a reader I tend to feel a bit frustrated if I am not understanding something and know I likely won’t work it out.

The conclusion of the book was interesting and I didn’t expect some of what was revealed but it also didn’t grab me the way I expected it to, I think in contrast with The White Murders stories it felt a bit mundane. Everything felt resolved but I maybe wasn’t left with the satisfaction that I wanted to feel at the end.

There was a lot about this book that I liked and I appreciate how original in style it is, for me it didn’t quite land where I wanted it to but I definitely think that people will be blown away by this book.