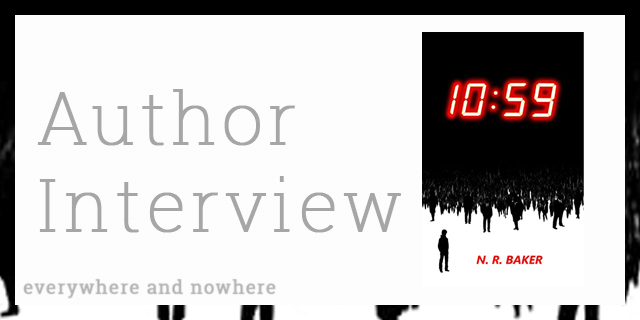 Earlier in the month N.R. Baker released her first full length novel 10:59 and today she is answering some questions, but first here is what the book is about…

A deadly virus. A world on the brink of destruction. An impossible decision.

If you held the lives of those around you in your hands, who would you save?

Louis Crawford is a boy with a seemingly unique ability: he sees problems and solutions that are invisible to others.

Louis finds himself thrust into the middle of an organisation that has the power to save the world. But are its motives pure? And can he live with the devastating price that humanity must pay?

The clock is ticking…

Tell us a bit about yourself – how did you start writing and why?

I can’t remember starting to write. When my parents moved house and cleared their loft, they discovered some of my early works, written when I was five or six years old. The stories were brief and terrible, but they prove that I’ve always been fascinated with the art of using words to paint pictures.

Tell us a bit about 10:59 and what prompted you to write it?

10:59 is the story of Louis (‘with a wiss, not a wee’): a teenager who has a seemingly unique ability to see things that are invisible to others. When he’s asked to come up with an idea that will change the world, his answer is both shocking and simple. Louis finds himself thrust into the heart of an organisation that has the power to save a planet on the brink of destruction. With time running out, Louis must decide whether his employer’s motives are pure. And he will face an impossible dilemma about the devastating price that humanity must pay for its own salvation.

I was prompted to write 10:59 by what I see happening in the world. I wanted to explore a deliberately controversial scenario based on the facts of our increasingly dystopian existence. I’ve never seen myself as an eco-warrior, nor do I own a soapbox or have a habit of wearing socks with sandals, but I started with the convict ion that Louis’s story needed to be told – and told in a way that would be entertaining and accessible for young adults as well as adult readers. In the course of all my research for the book, that conviction has turned into a passionate desire to get people thinking and talking about the greatest taboo of our time.

How did you come up with the inspiration for the story?

Readers will make assumptions about my inspiration for the novel because it features a deadly virus, when in fact I wrote the book two years before the coronavirus pandemic. I had no idea how topical and scary that aspect would turn out to be.

Is Louis, the main character in 10:59, based on anyone you know?

Not directly. Louis wandered into my imagination and introduced himself, and then we got to know each other as I wrote the story. I recognise some of myself in him, and there were a number of scenes where I thought about how my son Connor would react in the same situation, which helped me make sure that Louis’s responses and actions felt real. I think Louis and Connor would get along with each other pretty well.

Tell us about your writing routine and where you tend to write?

What routine? I’m happy to say that my life is a little… unconventional. I’m lucky enough to be able to step outside what most people regard as normal routines, and that means I generally eat when I’m hungry, sleep when I’m tired, and write when I’m inspired. I write at my desk, which was situated in Oxfordshire while I wrote the first draft of 10:59. The desk and I have now relocated to France.

How did you find the editing and publication process?

Very slow, very challenging, and thoroughly rewarding. Writing a full-length novel in the first place is hard, but it’s just the start. Seeing a book all the way through to publication is definitely not for the faint-hearted or the impatient! But at this end of the process I can honestly say I’ve enjoyed it, and I’m proud to be a Burning Chair author. I’m confident that my book is the one I wanted to write and it’s ready to be unleashed on the world. Whether the world is ready for 10:59 remains to be seen, but the feedback from advance readers has been brilliant, so that’s incredibly exciting.

What’s next in the pipeline for you?

My pipeline is positively bulging with ideas and half-written stories, which may sound uncomfortable but of course it’s a great affliction for a writer to have. The story I’ve been developing recently starts with the main character falling through the floor of a cave and then… well, you’ll have to wait and see.

N R Baker loves exploring the world and also the power of words. She spent much of her childhood up a tree in Somerset with her head in a book, either lost in the worlds created by authors like C.S. Lewis, or writing truly awful tales of her own. Since then she has earned recognition for her travel writing, poetry, lyrics, flash fiction and short stories. 10:59 is her first full-length novel. She lives in rural France.