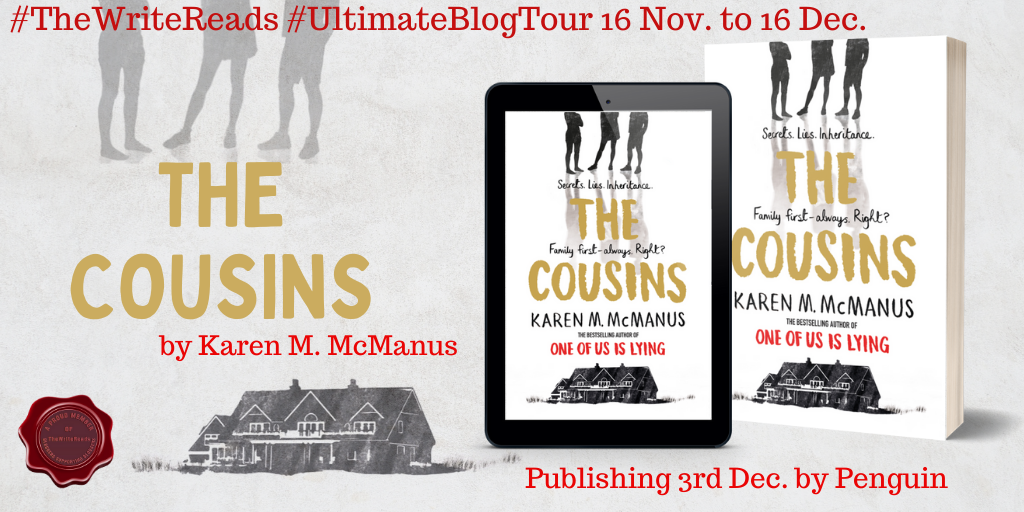 It’s another YA mystery for me today as I join in on The Write Reads ultimate tour for The Cousins.

The Storys are the envy of their neighbours: owners of the largest property on their East Coast island, they are rich, beautiful, and close. Until it all falls apart. The four children are suddenly dropped by their mother with a single sentence:

You know what you did.

They never hear from her again.

Years later, when 18-year-old cousins Aubrey, Milly and Jonah Story receive a mysterious invitation to spend the summer at their grandmother’s resort, they have no choice but to follow their curiosity and meet the woman who’s been such an enigma their entire lives.

This entire family is built on secrets, right? It’s the Story legacy.

This summer, the teenagers are determined to discover the truth at the heart of their family. But some secrets are better left alone.

The Cousins will be published on the 3rd December 2020.

I was really looking forward to this book after very much enjoying another of the author’s books earlier this year. Family secrets are always a big draw for me add to that a reclusive grandmother and of course all the drama that an inheritance can bring, so I was excited going in.

The cousins is written from four points of view from the cousins themselves, Milly, Aubrey and Jonah in the present day but also from the past through Allison’s point of view. The voices of each character were really clear and I liked the occasional glimpse into the past, whilst it helped to build the suspense it also gave us a bit more insight into the Story children.

I really liked the chemistry between Milly, Aubrey and Jonah, they are all very different but what starts as a forced union quickly becomes real friendship. They all have some issues with their families and it was nice to see how they manage to support each other and create a family bond where there wasn’t one. I did like that it wasn’t entirely plain sailing for them though and there are some situations that put a strain on what they are building, it made it feel genuine and added extra angst here and there.

True to form there were quite a few unexpected twists and turns in this story and in no way had I figured out anything before it was revealed, however, I didn’t feel like these had the impact that I was looking for. I think this is because of the pacing of the book, I read thriller in the Goodreads description and thought that I would be thrown into the action from the off, instead the book really builds upon the characters and as a result, didn’t have that immediate unputdownable grip for me.

The pace of the story does really start to build momentum about three-quarters of the way in but does then leave you with the feeling of the ending being rushed because all of the action is in such a short space of the book. The book is still very enjoyable and I still had trouble putting it down because I was desperate to discover the secrets of the Story family, but I think if I had realised it was more of a character-driven mystery rather than a thriller, then I would have had a slightly different reading experience.

The Cousins is an intriguing book, with well-developed characters and plenty of unexpected surprises to keep you entertained, I know I’m definitely looking forward to picking up my next Karen M. McManus book.

One Of Us Is Lying