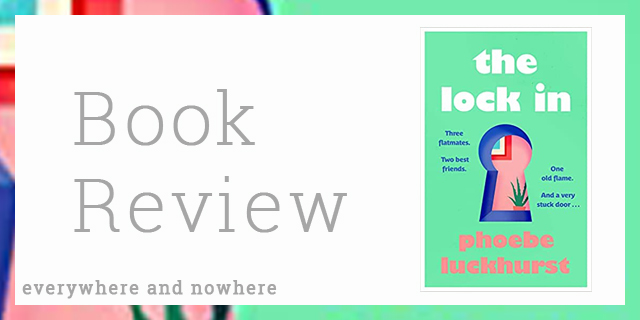 The third book towards my challenge and one from my original list too, I was hoping to have read more by now but I’m just glad to be getting back into reading.

The Lock In
Phoebe Luckhurst

Ellen and Alexa have survived hangovers, dodgy landlords and most of their twenties together.

But can they survive this?

One Saturday morning, while nursing The Hangover from Hell, a flooded kitchen leads best mates Ellen and Alexa, and hapless housemate Jack, into their attic to turn off the water supply.

But when Ben – Alexa’s date from the night before – walks in, the door slams, the handle breaks and all four of them are trapped.

Cue The Worst morning-after-the-night before.

As the hours tick by, Ellen nurses her sore head and watches as her best friend falls for this handsome stranger.

Only for a horrifying realisation to hit. She is sure she knows Ben from somewhere.

Frantically searching her memories, Ellen tries to piece together exactly how they’ve met before.

When a distant memory finally comes to her, she desperately wonders: could Ben really be who she thinks he is . . .

And more importantly, what on earth is she going to do about it?

It was definitely the cover that caught my attention with this book first and then when I read the tagline I was sure that this would be a book that would be perfect for my summer reading.

I think what I enjoyed the most about this book was that as well as the light-hearted fun that I was expecting I also got a lot of unexpected nostalgia, I had entirely forgotten about MSN until reading this and it just brought back so many funny memories. It also became a whole lot more relatable, I was right there with Ellen, I could completely understand her feelings about that whole scenario because I too was that teenager crushing on boys and trying to catch their attention with crazy song lyrics.

I will admit that until that point in the story I hadn’t quite yet been hooked, I feel like I was waiting for a certain kind of conflict that hadn’t quite materialised. I think because for me the expectation going into the book was that the characters being locked in the attic wasn’t where the excitement of the story was going to come from, so unfortunately for the first part of the book I was waiting for something more exciting to happen. However once Ellen and Ben discover that they have places in common and maybe know each other I felt a lot more involved in the story and was eager to find out how the situation between them would play out.

I felt a connection to Ellen straight away, I too would have (until very recently) not known what to do if I found my kitchen flooding, and could relate to her next day hangover fears. Alexa too was relatable, I liked that she was the de facto leader of the group and that she was the one that everyone else thought would know what to do, even though she was trying just as hard as everyone else to get by. I think the dynamic between Ellen and Alexa was great and I liked that they were a bit opposite to each other but knew how each other worked well enough to handle certain situations.

Jack was an interesting one, admittedly at the start I wasn’t so keen on him, he seemed a little awkward and unsure and I felt his sections drag a little. However then he does something that I thought was rather unexpected and adds another level of tension in the story and I was intrigued to find out what impact that would have on the rest of the group, especially when they made it out of the attic.

I think I had expected a little more tension between the characters when they made it out and whilst I loved how heartwarming the ending was and that it left me on that happy upbeat note, I feel like it would have been sweeter if the consequences of some things were explored a little further.

The Lock In was an enjoyable read, a light-hearted and creative take on a locked room mystery, and I loved the trip down memory lane that it took me on.