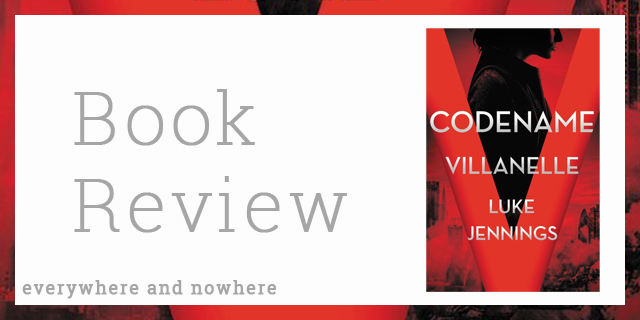 I didn’t realise that Killing Eve was based on a book, so I was excited to see where the story started.

Villanelle (a codename, of course) is one of the world’s most skilled assassins. A catlike psychopath whose love for the creature comforts of her luxurious lifestyle is second only to her love of the game, she specializes in murdering the world’s richest and most powerful. But when she murders an influential Russian politician, she draws a relentless foe to her tail.
Eve Polastri (not a codename) is a former MI6 operative hired by the national security services for a singular task: to find and capture or kill the assassin responsible, and those who have aided her. Eve, whose quiet and otherwise unextraordinary life belies her quick wit and keen intellect, accepts the mission.
The ensuing chase will lead them on a trail around the world, intersecting with corrupt governments and powerful criminal organizations, all leading towards a final confrontation from which neither will emerge unscathed. Codename Villanelle is a sleek, fast-paced international thriller from an exciting new voice in fiction.

Usually, when a tv show or movie has been adapted from a book I try my best to read the book first because I know that generally, the adaptation isn’t as good as the original, so I prefer reading first in case I am put off and can’t bring myself to read the book. There are obviously a few exceptions to this rule and I hate to say it but Codename Villanelle is one of them, I was really excited to read this book because I thought it would be every bit as vivid and entertaining as the tv show and it really didn’t live up to that at all.

I think maybe if I had read the book first then I would have a slightly more favourable view of it but not by much. Unfortunately, it just didn’t grab me in any way, it is a fairly short novel at roughly 220 pages but at times felt like I was trying to slog my way through a 600 page book. It’s not that it’s particularly badly written. Still, for such an interesting concept everything is very surface level and there wasn’t that feeling of getting invested in the characters which in turn makes it difficult to care about the story.

Eve and Villanelle were unfortunately very flat in this, there just wasn’t enough of a chance to get to know Eve on a deeper level, and whilst I found out a lot more about Villanelle she still didn’t jump off the page. I felt like there were occasions when I was reading and I couldn’t figure out why some of it was included, it was as if some form of personality was trying to be injected into the book too late on in the story when this should have been built from the start.

As I said the concept is such an interesting one, a female assassin that there is not much trace of working for an unknown and far-reaching organisation and a British agent that wants to bring her down, but the execution is admittedly a little boring. There is a lot of telling me what is going on without really going into any feelings, which I think would have helped to add a bit more suspense to the story, instead of reading like a very formulaic thriller story. Also considering the main characters are female and are supposed to be highly intelligent and trained in combat you would have thought the author would have a bit more care not to sexually objectify them at every chance he could.

I think if you haven’t watched the tv show yet and you get a chance to read this first then you might enjoy it, but I know that even with the very unusual cliffhanger of an ending I won’t be continuing with this series.