As a New Years present, my previous landlord decided that he wanted to move Scorpio and I into a smaller room and double the rent money. The long and the short of it is that we ended up moving, in a day, into the spare room of one of Scorpio’s very charitable friends.

This is in fact a better move for us, more space and warmth, a new start, however there is one thing that I hadn’t realised before we moved in. There would be an extra bedfellow. Smudge. 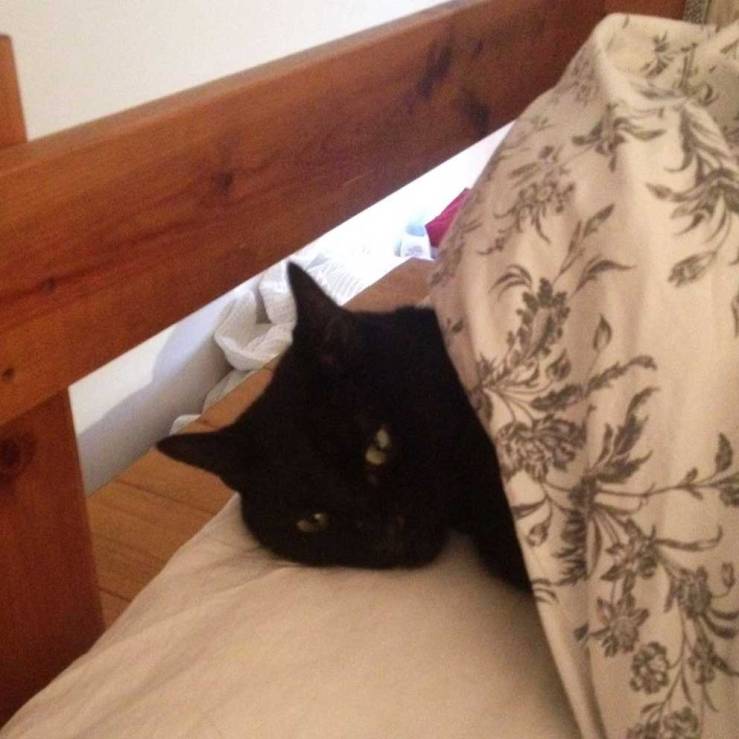 I’ve never had a cat before; my Dad is allergic so I wasn’t allowed one when I was younger, then I was at university, and since then I’ve not really been up for that kind of responsibility.

It certainly is an adjustment, an entertaining adjustment, but an adjustment nonetheless. I think part of the problem is that the spare room is Smudge’s territory, and we are invaders.

Very early on he set his boundaries. We tried to put a throw over the couch in the room, this was immediately claimed and he wouldn’t let us adjust it. Scorpio got bared claws and a fair few scratches that proved Smudge’s displeasure at our attempts of moving him to straighten it up. Eventually we managed to lure him out of the room and got it fixed.

The same happened when I tried to make the bed, at the same time he decided that he wanted to sit in his spot, in the corner of the mattress. I’m a little faster though and managed not to get swiped. Although a very enraging game of hide and seek and keep trying to dodge me human ensued, I was able to make the bed up, fresh and clean for his highness to get comfortable on.

He also meows very demandingly and relentlessly when he wants something. I’m beginning to understand when it’s a food meow or an open the door meow. I’m not sure if that’s weird or not but it happens.

He also seems to find pleasure in scaring the dickens out of me, the most recent of which being, I was in the kitchen alone and suddenly there was a noise. A kind of scratchy rustling noise, as I looked around I couldn’t see anything and thought maybe I was imagining it. Then it kept happening and I was starting to get a bit freaked out, I’ve lived in some old flats but no matter how many fast little furry friends you have seen scurrying around, I still tend to look for the nearest high surface with a little scream lodged in my throat, just waiting to be released. As I was about to reach for a chair the noise happened again but seemed to be very close and as I looked around, two yellow eyes were suddenly peering up at me and made the little scream escape. The head soon followed with a very imperious meow. 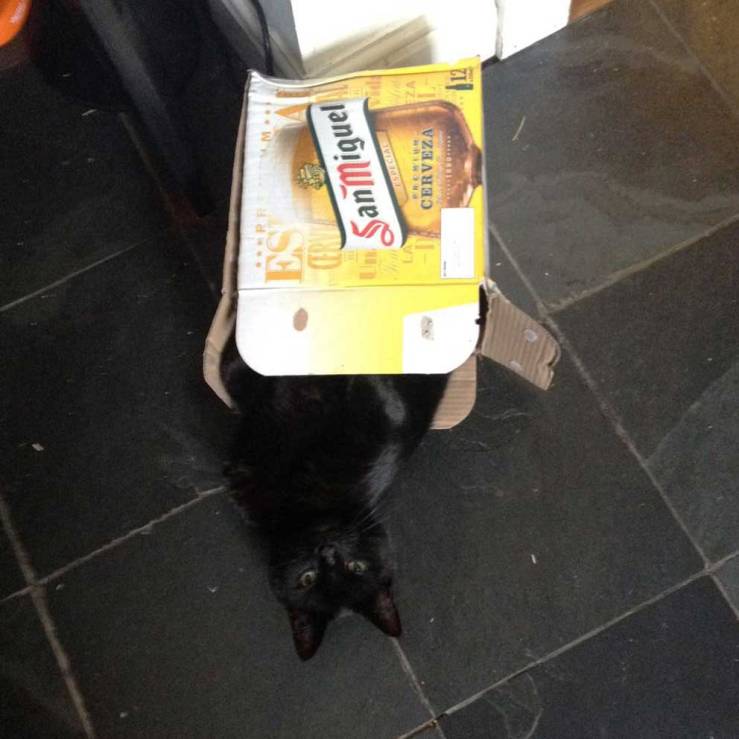 This is apparently Smudge’s box, which he occasionally likes to sleep in and on other occasions like to scare me from.

All of these things he can get away with because he is very cute, however there are a few instances where I find myself a little perturbed. He seems to have developed a liking for following me into the bathroom, which would be fine except he likes to jump up onto the bath and sit and watch me. When I wash my hands he likes to be in the sink, although he doesn’t like to get wet, even though when the water gets turned off he’ll paw at the spout. If I deign to go into the bathroom and avoid him joining me, he calls very loudly from the other side of the door and scratches at it, to make me aware of his indignation. The same goes for the shower, if he sees me with a towel he’ll run like fury to get in before the door closes, sit on the toilet and watch, it’s quite unnerving.

Is this normal for a cat? I knew they were very alpha male but I didn’t quite think such a small thing could be so demanding. I also have days that I wonder why I am doing the bidding of the small alpha, and why I seem to end up talking to him like he’s taking in every word and ignoring me on purpose. Then I wonder if this is why cats do so well in the world, their mischievous mind tricks.