It feels like a lifetime ago that Scorpio and myself went to Catalonia, it was only last month but I really feel the days are flying by with not much to show for them. Today I found the little camera I took with me on our journey, when I looked back at the pictures I was a little disappointed that I had taken so little. However the ones I did like were enough to trigger all the nice memories I have of our journey.

The first day was a bit of a blur we got to Barcelona and found our apartment and at that point needed a nap, which meant that by the time we got going again it was getting late in the day, we still took a nice stroll and ended up in a jazz bar…the rest gets a bit fuzzy after that.

The second day I think was my favourite it was glorious weather and even though we were feeling the effects of the day before, it gave the day a very chilled out vibe.

We had just walked through a park and we were looking for somewhere to stop for lunch and we came across these trees and I loved that you would have fruit trees in the street. Sometimes it’s the small things that remind you that there is a whole world of different things out there, you just have to go searching for it. We found a lovely courtyard and sat down for a really nice meal, Scorpio had a few different tapas dishes and I had duck with a summer berry sauce and tarte tartin, with some bubbles of course. It was amazing. We sat for hours, enjoying being in the sun and each other’s company.

I have to say that there were lots of recommendations to go to Las Ramblas, which is essentially a very busy street filled with lots of shops and restaurants but we preferred getting lost in the Gothic Quarter. I didn’t get any good pictures of the maze of little streets and boutique shops we found but if you’re going there then you’ll want to discover it for yourself. I did manage this one picture of what I think is a church, which was in the middle of all these little streets, it could be a museum though, I can’t entirely remember. What I loved about it was at the same time it could seem menacing or lofty and grand, depending on what side you approached it from. Also it might be hard to spot but it had different animal gargoyles sat at the top, we tried to guess what they were but they were either too high or a bit too mythical looking to get them all.

Of course no trip to Barcelona would be complete without a trip to Le Segrada Familia, it is such an impressive building but honestly more so from the inside than the outside. It so amazing to think that someone had such faith in something that they decided to make such a monument, I definitely left with a feeling of awe and inspiration. Admittedly I am probably sat somewhere between humanist and omnist in the scale of religion but just sitting on one of the benches made me feel at the same time very small and entirely encompassed. Its a strange sensation which I think the design definitely reflects, I read somewhere that it is supposed to represent a forest and its canopy, and I think the light from the different coloured glass definitely gave it a magical atmosphere in my eyes. 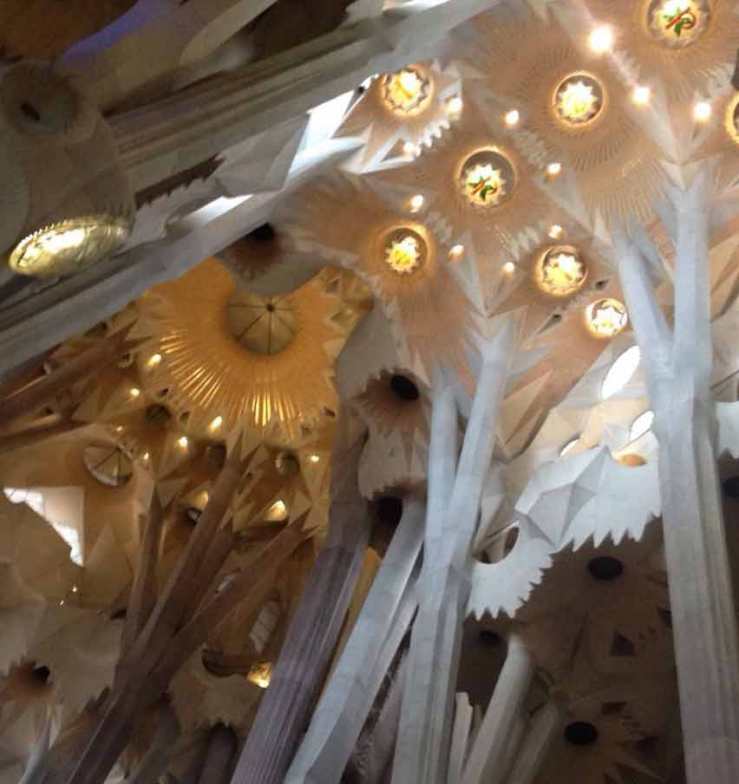 There is not really a better conclusion to the first part of the trip, so I’ll leave you with a snippet of the next part…