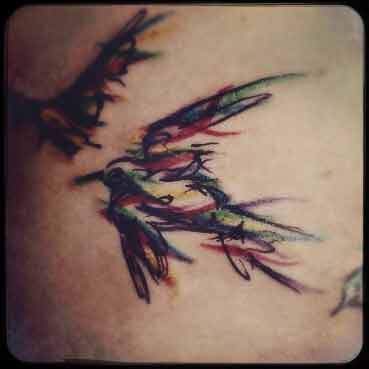 I caught this bug a few years ago; well that’s not entirely true. I’ve wanted a tattoo for a long time but knew I had to be really certain of what I was putting on my body, the actual inking only started a few years ago. The above picture is my first tattoo, it’s pretty amazing, but I suppose I have to say that.

Since then I have wanted loads more but have tried to be sensible and sit on the idea for a while before committing to one. This has worked for the most part, I only have one spontaneous one, and I don’t hate it but I am hoping to get it covered. What a surprise. Luckily it’s small and there’s not a lot to it so I’m keeping my fingers crossed that it can be done.

Which brings me back to my little tease at the end of my last post. The plan is to have some very colourful stargazer lilies inked over it. I’ve been sitting on this one for a while and the other day Scorpio said that he would pay for it as an early birthday present. Which I’m really quite excited about because it would take me a while to save for it. I think there might be three or four, all different colours and not a lot of black outline, leave it more to the imagination…

I’ve got a consultation coming up soon so I’ll see what kind of design we can come up with.

5 thoughts on “T is for…Tattoos”