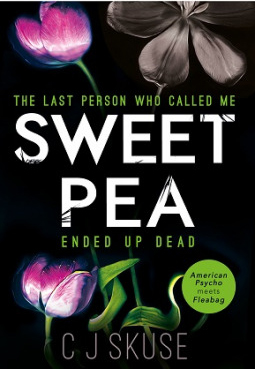 The last person who called me ‘Sweetpea’ ended up dead…

I haven’t killed anyone for three years and I thought that when it happened again I’d feel bad. Like an alcoholic taking a sip of whisky. But no. Nothing. I had a blissful night’s sleep. Didn’t wake up at all. And for once, no bad dream either. This morning I feel balanced. Almost sane, for once.

Rhiannon is your average girl next door, settled with her boyfriend and little dog…but she’s got a killer secret.

Although her childhood was haunted by a famous crime, Rhinannon’s life is normal now that her celebrity has dwindled. By day her job as an editorial assistant is demeaning and unsatisfying. By evening she dutifully listens to her friend’s plans for marriage and babies whilst secretly making a list.

From the man on the Lidl checkout who always mishandles her apples, to the driver who cuts her off on her way to work, to the people who have got it coming, Rhiannon’s ready to get her revenge.

I was really excited to get into this one, I had heard a lot of good things about it and how many books boast a female serial killer as their protagonist.

At the start Rhiannon was brilliant, a breath of fresh air, she was so blunt and got away with saying all sorts of things that I couldn’t help but laugh at. What she says is sometimes provocative, sometimes that little thought that you’ve maybe had but would never say out loud and sometimes just really funny, even if she doesn’t mean to be.

I’ve never seen such a self-righteous bunch of ass-wipers in all my life. It’s not my fault I want to achieve something with my life, rather than knock out Little Me’s faster than pinballs to do it instead

Her interactions with her group of female friends she calls the PICSO’s (People I can’t shake off) I found hilariously relatable, I’d be surprised if we all haven’t met people like this. I also really enjoyed her kill lists because they were so changeable one minute someone was on it for doing something awful and the next they would be on it for doing something pleasant, you never knew what to expect from her.

However as I got further into the book this all got a bit repetitive, I was expecting there to be more of a focus on her being a serial killer, instead the focus was more on her everyday life. I’m not sure if this next part would be considered a spoiler so I’ll just say now that you might want to skip the rest of this paragraph just incase…but her kills do become a little more messy as she goes on and instead of using that to create some tension in the book it kind of just gets glossed over and back to the everyday.

A new kitchen shop has just opened down by the riverside, in lieu of the overpriced women’s shoe shop. Top of the range kitchenware…Didn’t have time to look in today but I’ve got my eye on a five-piece set of knives in the window. It’s pricey but I’m worth it.

I also would have really liked Rhiannon to be developed a little more, I mean she has a pretty interesting backstory but it left me with a lot of questions that weren’t answered. To me it felt like there were a lot of hints towards things but then there wasn’t much follow up and I kept waiting for something to be revealed to tie certain bits together but it never happened.

I know a lot of people have been saying that it’s either a love it or hate it book, I think I’m a bit on the fence with this one I didn’t hate it but I didn’t love it either, if I’m honest I wanted more from it. As well as what is noted above it had some bad language and some pretty unconventional kinks in there, all of it intended to shock, but I think it missed out on a lot of it’s own potential and that’s left me a bit underwhelmed.

I can see why other people like it so I would still recommend giving this a read because it’s one of those books that people will be talking about and it can be funny. It maybe does deals with topics that some people might not be comfortable with reading though, so just be warned if you do decide to take the plunge.

Thanks to HQ and Netgalley for the review copy of this book.