Welcome to my stop on the Under A Tuscan Sky tour, today I am bringing you an excerpt from the book, but before we get to that here is what it’s about…

Escape to Tuscany this summer with Karen Aldous’s brilliantly uplifting read. Perfect for fans of Erica James and Cathy Kelly.

When Olivia Montague’s grandmother passes away, she decides it’s finally time to make some changes in her own life. So she breaks up with her ‘going nowhere’ boyfriend and embarks on a journey to her Nonna’s home in Tuscany.

Until now, Olivia has always believed that she’s incapable of love, after being abandoned by her parents as a baby. But with each day spent at the gorgeous villa nestled in the rolling Italian hills, she feels her heart begin to flutter…

And when handsome antiques dealer Hugh St. James arrives on the scene, she realises things might be about to change forever!

After she closed the front door with a triumphantly smug sigh, Olivia’s vision immediately rested on the back of a large autumn-burned maple leaf that had settled on the apex of the stone-capped post. It was soaking in morning sunlight, its veins stretching prominently into the rich-orange glow of the flesh and burnishing in glory. Her lips curled up at the sight as it reflected her own turn of events and the inner radiance that occupied her. Will was now out of her life.

She pulled the black iron gate to, buttoned the top of her coat to block out the fresh October breeze from her chest, and marched rhythmically through the Bermondsey streets and towards the square that housed her business: Square One Osteopathic Clinic. After unlocking the Georgian front door, she collected the post and headed directly through reception towards the kitchen, enwrapped by the warm air from the newly fitted – and so much more efficient – heating system.

As she carried her coffee back through the hall she hit the switch on the retro-style radio. At once the music streamed directly to her feet.

‘Yes!’ She placed her coffee and banded post on the reception counter and allowed the music to take her. Her hips swinging as Michael Jackson was singing Man in the Mirror.

She heard the front door bounce from its latch and a familiar figure strode towards her.

‘Wow, look at you dancing first thing in the morning,’ Chiara chimed, as she watched Olivia twirl around the reception desk, clicking her fingers. ‘Cold?’

Olivia raised her arms, still clicking her fingers to the beat and waving them in the air whilst wriggling her hips. ‘No, just happy. Happy, happy, happy.’

‘Happy that I made the biggest decision ever,’ she said, stretching a smile and amused at Chiara’s mouth suspended in torment. She scooped up the front of her walnut-coloured hair and declared, ‘I’ve dumped Will.’

Olivia bent her knees as she wriggled in front of Chiara. ‘It’s fine. I finally admitted to myself Will is a waste of space, that I’m not love material, I’m never going to fall in love, nor do I think I’m capable, so I told him and now I’m single.’

Her friend since their first day at school, Chiara stared at her horrified, her large brown eyes wide. ‘Will. You’ve dumped Will? Oh my God, Liv. I thought you two were sound, and wasn’t there talk of marriage, babies?’

Olivia gave a shudder. ‘Yes, I know but realistically, it would never have worked. Chiara, I don’t love him. We’ll never have what you and Liam have.’ She clapped her hands as she watched her friend’s eyes widen further.

‘But I don’t believe it; you’ve never done anything so impulsive. I can’t believe you finished with Will. Are you sure?’

‘No, not at all. I’m surprised, just totally surprised.’

‘Oh, I don’t know now. I’ve had a somewhat strange but liberating weekend, that’s all. And I didn’t want to disturb you and Liam. If you really want to know, it started on Friday night when I got out my passport and stuff to organize my next trip. I was going to phone Will for the hundredth time to try and get an answer about our flight to Italy, but I found some photos my mum gave me of Nonna and Nonno, and her and dad. God, it now seems so … what’s the word, fatalistic, something along those lines. I’m not sure what affected me exactly but their photo captivated me.’

Olivia bit her lip, looking serious. ‘Their eyes always seemed to lock together rather than at the person taking the picture or the camera, which is sweet and so suggestive of their own little world entwined in love. It made me think of the story you told me when you and Liam went to stay at Nonna’s farm in May, you know, when she told you they used to hide under the vines to make out. Seriously, it’s haunting.’

‘Oh, you sound as though you have given this lots of thought.’

‘You could say that. I did lots of mulling over at the weekend. Well, I’ve naturally been doing lots since Nonna’s death, but seeing those photos made me take a good look at myself, a bit of soul-searching if you like, and …’ Clicking her fingers and lifting her chin, Olivia burst into a loud song, ‘I’m “gonna make dat change.”’

She waited for Chiara’s response, but her friend didn’t speak. ‘Do you think I’ve lost it? I’ve been dreaming, no I’ve been deluding myself I was in love with Will. But it’s not love. There was never any magic. And, if I’m honest, I don’t think he really loved me.’

Chiara stared, hands on hips. ‘Whoa! Sounds deep and … so sudden. Liv, you haven’t lost it. But, what have you done? Poor Will, I expect he’s hurt? And, well …’

Olivia scrunched her face and shook her head as she impulsively continued to dance. Chiara was probably as confused as Will had been. This change of heart had come out of the blue. She had never acted so impulsively before and she knew why Chiara found it difficult to comprehend.

‘His pride maybe hurt, but he didn’t seem too bothered when I told him. Although he may have been half asleep when I rang. I think he was tanked up with alcohol. He’ll get over it. I’m being true to myself for once in my life, and what’s more I’m going to Italy on my own.’

‘Look, I’m with your decision – I’m just not sure where my friend, the overly cautious Olivia is and, well, the other factor. I don’t know, perhaps grief has the answer. You must be upset, stressed.’

Raising her nose in the air, Olivia tittered. ‘Maybe, but it’s actually quite refreshing as well as liberating. But really, do I need need a man in tow?’ Olivia picked up her coffee and boogied into her office, proud of her commitment to herself.

Well if the blurb didn’t make it sound like a perfect summer read then that extract certainly has! If it sounds like a book you’d like to read then fear not as there is a brilliant giveaway (UK only though chums) where you could win… 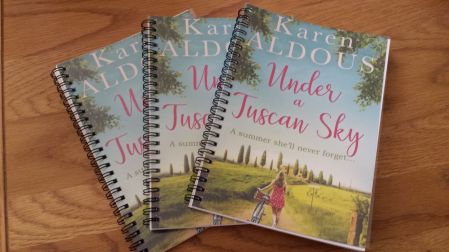 1st prize of a £10 Amazon voucher, eCopy of Under a Tuscan Sky & a signed notebook

If you want to find out more about the book and the author then be sure to check out the other stops on the tour.

Karen Aldous enjoys village life on the edge of the north-downs in Kent with easy access to the buzz of London. Not only does she love the passive pleasures of reading and writing, she also craves the more active pursuits with her family and friends such as walking, cycling and skiing especially when they involve food and wine!

Karen gets much of her inspiration from her travels and if she had to choose, France, Greece, Switzerland, Italy and the USA would be her favourites. However, wherever she goes, she discovers a new character emerges in ‘Karen’s World’. She likes to write about strong independent women who can direct their own lives – but struggle to control them! And, of course there’s always a gorgeous hunk or two!