Another book I read on holiday earlier this year, I don’t know why it has taken me five months to write a review for this book, I’ll have to stop putting these things off. This one will be another really quick review. 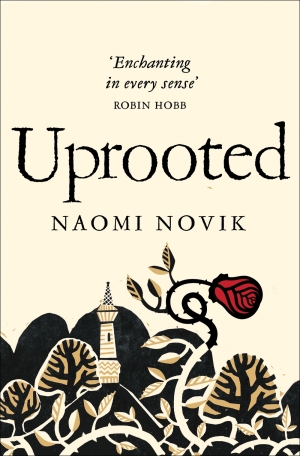 Agnieszka loves her valley home, her quiet village, the forests and the bright shining river. But the corrupted Wood stands on the border, full of malevolent power, and its shadow lies over her life.

Her people rely on the cold, driven wizard known only as the Dragon to keep its powers at bay. But he demands a terrible price for his help: one young woman handed over to serve him for ten years, a fate almost as terrible as falling to the Wood.

The next choosing is fast approaching, and Agnieszka is afraid. She knows—everyone knows—that the Dragon will take Kasia: beautiful, graceful, brave Kasia, all the things Agnieszka isn’t, and her dearest friend in the world. And there is no way to save her.

But Agnieszka fears the wrong things. For when the Dragon comes, it is not Kasia he will choose.

I loved the worldbuilding, that the wood was this living terrifying thing and that you could feel its darkness coming off the page. The magic as well, the explanation for it and the spells I loved that it wasn’t one size fits all, it gave it a very realistic quality.

The plot was just fantastic, I won’t say much about it because I don’t wont to spoil it for anyone but needless to say that the blurb doesn’t really do this book justice.

I love fairytales, so this book was right up my street.

A lot of other reviewers have mentioned that the book is very slow going and I will admit there were parts that did get a bit sluggish, however this was to give you a good sense of the world that Novik has created. Also after a certain point in the book I felt the pace really picked up and I couldn’t put it down

In rising panic, I counted the beacons back, to see where the message had been lit, and felt my blood run cold: there were nine in a straight line, following the Spindle. The ninth beacon-fire was Dvernik. The call had gone up from my own village. I stood looking out at the fires, and then I realized: the Dragon was gone. He would be well into the mountain pass by now, crossing to the Yellow Marshes. He wouldn’t see the beacons, and even when someone brought him word, first he would have to deal with the chimaera – a week, he had said, and there was no one else –

That was when I understood how much of a fool I’d been. I’d never thought of magic, of my magic, as good for anything, until I stood there and knew that there was no one else but me; that whatever was in me, however poor and clumsy and untaught, was more magic than anyone else in my village had. That they needed help, and I was the only one left who could give it.