Welcome to my stop on the Elements of Mischief tour, for your viewing pleasure today I have a review and there is also a giveaway, open internationally, if you like the sound of the book. 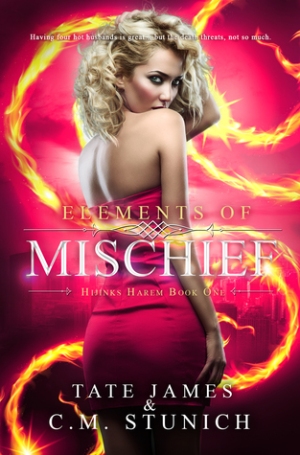 A match made in heaven…or in the bathroom, rather.

My name is Arizona Smoke, and I’m the proud owner of a house haunted by my dead Gram, best friend to a cocktail dress loving werewolf, and apparent soul mate to four plumbers who also happen to be elemental dragons. Besides rippling pectorals, tattoos, and…uh, nice, long pipes, the guys also have control of the elements.

Supernatural law (whoever heard of such a thing anyway?) dictates that since I stumbled upon the guys in their alternate forms, I have to marry them. All four of them. Oh, and apparently one lousy (okay, awesome) night of sex means that I’m an elemental, too—and no amount of magical penicillin can cure this disease.

All I wanted was hot running water and toilets that flushed, but now I’m dealing with monsters lurking in the sewers, supernatural politics, and four penniless (but totally hot) plumbers living in my crumbling old Victorian.

I’m Ari Smoke, wine aficionado, ex-barista, and a girl who is completely out of her element.

Having four hot husbands is nice…but the death threats, not so much.

I didn’t expect it but I have to say I was a little disappointed in this book, having read a few C.M. Stunich books before and loving them I thought I couldn’t go wrong, especially with such an interesting blurb. Unfortunately, this one fell a bit short of the mark.

This book is what I like to describe as a guilty pleasure book, it’s not serious, it’s something to read for a bit of fun and usually features hot men with bad boy attitudes. Now don’t get me wrong there were moments that were funny, lots of one-liners and innuendos, unfortunately for me it just went too far.

You know when someone tells a joke and you laugh because it’s funny, and then maybe a short while later they try and hit on it again and you’ll maybe laugh again because the first was so fresh in your mind, but when they attempt a third it has lost any humour. Well, that’s what this was like except it was every couple of pages and got to the stage where if I had to read about snaking drains or the length of someone’s pipe once more I might have thrown my kindle in frustration.

One thing I was expecting were some pretty steamy scenes, and I will say at the beginning there were some scenes that got me really hot under the collar, however yet again it just went a little overboard. There were some bits that I ended up skipping over because I felt like something interesting had happened plot-wise but instead of exploring this they decided to have sex.

I think the thing that annoyed me the most about this book was that it had such amazing potential, there is a really killer idea here and so far a fairly interesting plotline if you take out all the padding that’s gone into it. The idea of the elementals and what they can do and how they form a group really fascinated me but getting to that bit was kind of few and far between.

Of course, I was expecting that they would be macho bad boy supernaturals and in the guys at least there was actually a little more depth than I expected but I would have liked to find out more background on them. I know this is the first in the series so maybe it does get explored in the next books but I feel like it just kind of scratched the surface in this one when it could have given a lot more.

The main lady in this, Arizona, wasn’t my favourite. She almost could have been because there were moments that she seemed as if she was going to be a strong female character and then she let me down. I think the thing that really put the nail in her coffin for me was the constant mention of her only being a barista and not say a writer or chemist, when in fact she was unemployed and had no passion for coffee whatsoever, wine seemed to be her prefered beverage. I can’t stand looking down on someone for their job title, even if it is self deprecating.

Even though there were some gripes I have to say that I had a hard time putting Elements of Mischief down, the glimpses of storyline were enough to keep me going, and I was a little disappointed when it ended where it did. I think I am going to give the second book a try because I want to find out what happens but I am hoping that it is more action and less fluff.

So if reverse harems are your thing or sexy plumbers or you want to see for yourself just how many times the word barista can be used in a book, then you should click the link below to enter the giveaway for…

one of five eBook copies of Elements of Mischief

Tate James was born and raised in the Land of the Long White Cloud (New Zealand) but now lives in Australia with her husband, baby and furbaby.
She is a lover of books, red wine, cats and coffee and is not a morning person. She is a bit too sarcastic and swears too much for polite society and definitely tells too many dirty jokes.

C.M. Stunich is a self-admitted bibliophile with a love for exotic teas and a whole host of characters who live full time inside the strange, swirling vortex of her thoughts. Some folks might call this crazy, but Caitlin Morgan doesn’t mind – especially considering she has to write biographies in the third person. Oh, and half the host of characters in her head are searing hot bad boys with dirty mouths and skillful hands (among other things). If being crazy means hanging out with them everyday, C.M. has decided to have herself committed.

She hates tapioca pudding, loves to binge on cheesy horror movies, and is a slave to many cats. When she’s not vacuuming fur off of her couch, C.M. can be found with her nose buried in a book or her eyes glued to a computer screen. She’s the author of over thirty novels – romance, new adult, fantasy, and young adult included. Please, come and join her inside her crazy. There’s a heck of a lot to do there.

Oh, and Caitlin loves to chat (incessantly), so feel free to e-mail her, send her a Facebook message, or put up smoke signals. She’s already looking forward to it.