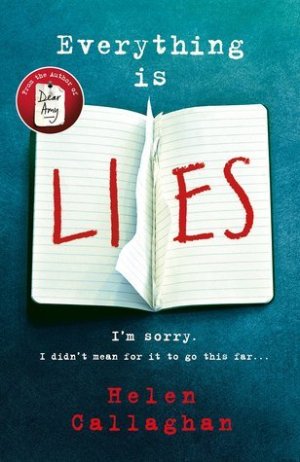 No-one is who you think they are

Until the day she arrives at her childhood home to find a house ringing with silence. Her mother is hanging from a tree. Her father is lying in a pool of his own blood, near to death.

Especially those closest to you

The police are convinced it is an attempted murder-suicide. But Sophia is sure that the woman who brought her up isn’t a killer. As her father is too ill to talk it is up to Sophia to clear her mother’s name. And to do this she needs to delve deep into her family’s past – a past full of dark secrets she never suspected were there . . .

What if your parents had been lying to you since the day you were born?

Everything Is Lies will be published on the 22nd February 2018

This book is one that you don’t want to go into with too much knowledge, I had read the blurb but when I got around to reading I couldn’t quite remember entirely what it was and that made for a more intense and mysterious reading experience.

The story is told in two narratives, through Sophia as she discovers her mother dead and father badly injured and then through Nina, Sophia’s mother, when Sophia discovers notebooks that unveil her past. I really enjoyed how the story switched from one to another, Nina’s story was told in three parts and with each revelation, I could feel the suspense building.

At first, I have to admit I found delving into Nina’s story more interesting, it’s what really hooked me into the story. However, as I got further into the book and Sophia starts to experience the consequences of what she has found out I couldn’t tear my eyes away because I was desperate to find out what had happened to Nina and what was going to happen to Sophia.

The characters were brilliant, very realistic, and I could feel the pull from them off the page. There is a large cast of them and I won’t go into detail here but their development and the clash of personalities was spot on, you can help but feel emotionally invested in them.

This book is pegged as a psychological thriller and whilst I had guessed at one of the revelations that turned out to be right, it didn’t detract from the story because for me even though there were plenty of twists in the story it didn’t feel like that was the focal point. There was a balance between the twists and how I felt about the characters, so even though I had figured out one of the strands of the story the reveal for me was more how this affected the characters, not the shock factor and I think that made it more profound.

I’m not going to say much more, except that this book did take me by surprise and I felt everything from elation, to being indignant, to feeling heartbroken, and that kind of fear where you know something bad is going to happen but you can’t take your eyes off of what is going on. The writing is realistic and the story is complex and gripping and I think readers will have a hard time putting it down.

2 thoughts on “Book Review | Everything Is Lies”